Vathy camp, on the island of Samos, has the capacity to host 650 people, but 4,500 are currently held there. Doctors Without Borders/Médecins Sans Frontières (MSF) runs a day care center near the camp offering mental health support and sexual and reproductive healthcare. We also provide more than 26,000 gallons of water to the majority of residents in the camp each day. 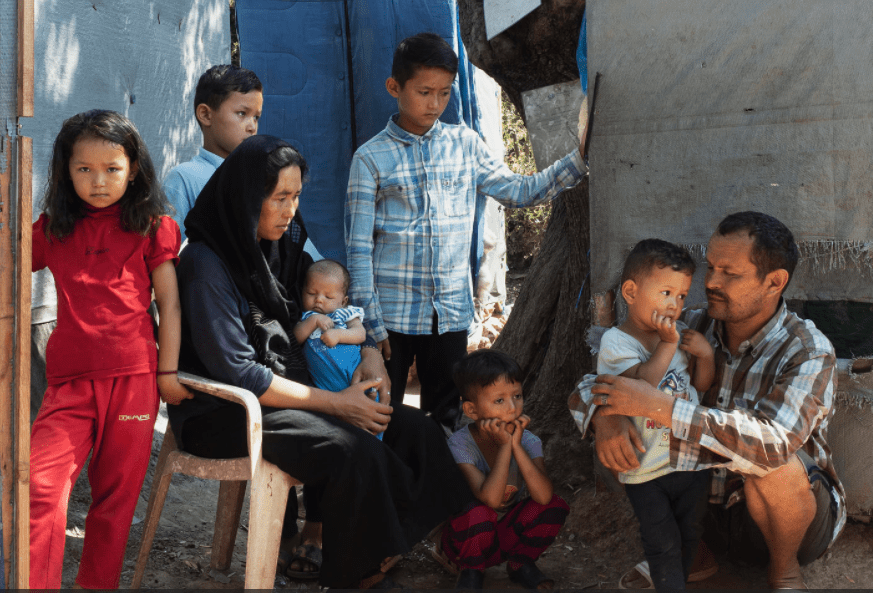 At the end of July, MSF teams spoke to patients about life in Vathy camp. Since then, COVID-19 has reached the camp—there are now more than 90 confirmed cases. Some patients have been transferred to other accommodation in Samos or on the mainland, but others are still trapped in Vathy camp living in overcrowded, unsanitary conditions that make it impossible to implement measures that will help to protect them from COVID-19.

MSF is particularly concerned about the lack of protection for elderly people and people who have chronic and acute medical conditions. Those who have tested positive for COVID-19 are isolated in terrible conditions with no access to medical treatment. The authorities have failed to implement or provide details of any response plan to prevent further spread of the virus in the camp.

MSF is calling for people to be moved from Vathy camp and other camps on the Greek islands to safe accommodation on the mainland, or in other EU states, immediately.

A family of eight from Afghanistan

Golnegar and her husband have six children—four daughters and two sons. They made the difficult decision to seek asylum in Europe after being targeted by armed groups in Afghanistan and fearing for the safety of their children.

Golnegar was pregnant and suffers from other medical conditions, but her and her family were denied a safe place to stay and are still living in Vathy camp. She gave birth to a baby girl two months ago. Golnegar started visiting MSF’s day care center in Vathy when she was pregnant and continues to come with her baby for regular checkups by MSF’s midwifes.

We only want a safe place for our children. We came here to save them from war and take them to school, and instead, we found ourselves in this camp waiting in limbo for almost a year.

“There is something wrong with my kidney," said Golnegar. "I am in pain and I have headaches every day, but despite my efforts to see a doctor in the camp or in the local hospital, this was not possible so far. All of my children have insect bites on their bodies, and they all complain often they feel sick, but there is nothing I can do for them.”

“We only want a safe place for our children," said Golnegar's husband. "We came here to save them from war and take them to school, and instead, we found ourselves in this camp waiting in limbo for almost a year. We just want to start a peaceful life and take our children to school and this is possible only on the mainland or in another European country. How long will we have to stay in this makeshift camp?”

Darwish, 74, and Aysha, 68, are from Deir ez-Zor, eastern Syria. Their first shelter burnt down in a fire that broke out in April 2020. After that, they spent almost a month living in a summer tent in an open field, fully exposed to the sun. They were eventually offered a makeshift shelter by a family who was leaving.

Darwish suffers from heart problems, hypertension, and kidney issues—he also cannot walk. Aysha also has hypertension and suffers from headaches and dizziness every day. The couple has four children, two daughters and two sons between the ages of 24 and 37. Their youngest child suffers from  permanent vision impairment caused by bomb fragments. They also have a 10-year-old grandchild who is asthmatic.

The living conditions in this camp are unbearable. There are snakes and rats, we do not have electricity and often there are fights in the camp.

The family still hasn’t been offered safe accommodation on the mainland despite having health conditions that make them more vulnerable to serious symptoms or death if they were to contract COVID-19.

"Our children have to do everything for us," said Aysha. "They have to take us to the toilet, to go bring food, and go outside the camp when they can to buy medication. The living conditions in this camp are unbearable. There are snakes and rats, we do not have electricity and often there are fights in the camp.”

“The doctors in the camp tell us that in Samos it is impossible to find specialized treatment for my medical condition," said Darwish. "They tell us that only in the mainland we will be able to find a doctor. The same applied to my 24-year-old son.”

Agnes, 43, a journalist from Democratic Republic of Congo

Agnes, 43, is a journalist from the Democratic Republic of Congo (DRC). She was persecuted by armed groups and is also a survivor of sexual violence.

In February 2019, she fled DRC with her baby, who sadly died during the dangerous sea crossing from Turkey to Greece. She arrived on Samos in October 2019 and lives alone in a tent in Vathy camp. Agnes visits MSF's day care center regularly to see a psychologist and social worker.

I cannot sleep at night because I do not feel safe. I want to ask the international community to stop treating us like animals.

“I do not have words to describe the situation in [Vathy] camp," said Agnes. "We sleep in tents in the forest. The food they distribute makes everyone sick. There are rats and snakes. We have to queue for the toilet and the showers for hours. Sometimes we prefer to defecate in plastic bags and then throw it at the garbage because there is no running water, or to avoid waiting in the lines. I cannot sleep at night because I do not feel safe. In this camp, there are people who rape women. People steal and threaten us—no one can feel safe. I want to ask the international community to stop treating us like animals."

Amira, 62, a mother from southwestern Syria

Amira is from Jabab, a Syrian village in Al-Sanamayn District, Daraa, southwestern Syria. Her husband was killed by armed men in Syria and two of her three sons were severely injured by shrapnel. Amira came to Samos with her daughter-in-law and her youngest son, 23, in December 2019 hoping to be reunited with her other two sons who were sent to Germany from Greece for medical treatment.

However, Amira is still trapped in Vathy camp and has not seen her sons in four years. She is asthmatic, needs thyroid surgery, and suffers from acute back pain, but despite her age and her medical conditions, Amira was forced to live in very unhygienic conditions in Vathy camp for six months before being moved to a hotel on the island. MSF provides her with the medication she needs while her case is being followed by a lawyer and social worker.

My only worry and my only wish is to see my children before I die. We escaped war and here I feel I am in another war. I cannot rest. I am so tired. I just want to have a peaceful life in a safe place.

“When we arrived, they gave us only one blanket," said Amira. "I was so cold, and this blanket could not do anything. I quickly realized we would suffer in this camp. At night, rats and snakes come inside the tents and bite us. We cannot sleep, we are just worried all the time about what will happen to us next. But the worst is the toilet. We close our eyes before going to the toilet. It is really really bad what is happening in the camp."

“My only worry and my only wish is to see my children before I die. We escaped war and here I feel I am in another war. I cannot rest. I am so tired. I just want to have a peaceful life in a safe place. I want to see my children, I want to be their mother. To hug them, to be there for them as every mother would, now that they are sick, in between surgeries in Germany, they need me. I feel their pain from here. I feel that they want me next to them.”

Khalil al Khalil is from Deir ez-Zor and suffers from chronic pneumonia and high cholesterol. He has lived in Vathy camp for eight months in a makeshift shelter with his son and daughter.

Khalil al Khalil tried to see a doctor in the camp several times but every time the doctor did not have the capacity to see him. Since speaking to our team, Khalil has been transferred to Athens.

We, as Syrians . . . thought that Europe would treat us with respect and dignity. We thought it would be safe. My only wish is to live a peaceful life with my children, but for this we need the help of Europe.

“It is not fair for people of my age to be abandoned and live in a camp like Vathy with no access to doctors or medication," said Khalil al Khalil. "I am afraid of COVID-19 and I am trying to take care of myself by isolating in my tent. However, I know that if COVID-19 reaches the camp only God will save us. We, as Syrians . . . thought that Europe would treat us with respect and dignity. We thought it would be safe. My only wish is to live a peaceful life with my children, but for this we need the help of Europe.”

Nabil Kabuli, 70, a grandfather from Afghanistan

Nabil lives in small makeshift shelter with his 10 children and grandchildren. His youngest granddaughter, Alia, is just 6 months old.

Nabil and his family arrived in Samos in February 2020. Due to his age and health conditions, Nabil is at high-risk of developing severe symptoms if he were to contract Covid-19. However, he says he is not afraid for his health, but for his children's.

We came for safety and for a better future for our children. We hope that someone will hear our words and understand we need help. If Afghanistan was safe, we would go back, but it’s not.

“We left Afghanistan because of war. Our family was persecuted, and we have already lost a cousin to the war,” said Mohammad, Nabil's 34-year-old son.

“If Covid-19 arrives here, only God can save us," said Nabil. "We came for safety and for a better future for our children. We hope that someone will hear our words and understand we need help. If Afghanistan was safe, we would go back, but it’s not."

In  early July, the family received a notification that they would be transferred to a camp on the mainland, but when our teams spoke to them, they hadn’t received any further information.