Greece: "They could not understand why they and their children were being detained" 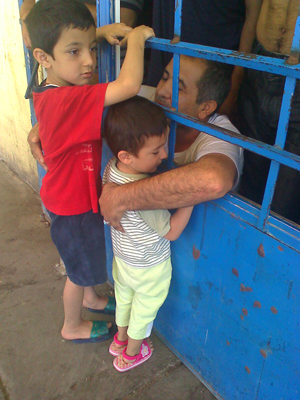 In the detention facility for migrants in Lesbos, MSF arranges for detained children to see their fathers.

Ioanna Kotsioni works as the Deputy Head of Mission for the Doctors Without Borders/Médecins Sans Frontières (MSF) project providing assistance to migrants, asylum seekers, and refugees in Greece since December 2008. She has visited the project in the detention center of Pagani in Lesbos, an island in the eastern Aegean Sea, and she shares with us her experience inside the detention center.

Between August 20 and 28, I visited the detention center of Pagani to support the MSF team that since July has been providing psychosocial support to the undocumented migrants inside the center. The situation I faced when I first arrived was shocking.

In the center, there were more than 900 people detained in extremely overcrowded and unsanitary conditions. The facility is actually an old warehouse that is not suitable to accommodate people. According to local authorities, its capacity is for up to 300 people, but when I visited I saw three times that many people—men, women, adolescents, and children—living in overcrowded cells, most of them sleeping on mattresses on the floor with no bed sheets. In each of the seven cells, including the cell with women and children, there were only two toilets and showers to be used by the 100 to 250 people detained there. People eat their meals inside the cell and are not regularly allowed in the yard.

To move around, you had to walk over dirty mattresses lying on the floor . . . most of the women were complaining that their children were sick and that they had not seen a doctor for days.

What was very alarming for MSF was that there were many women with small children inside the center. In one cell of about 200 square meters we found more than 200 women with children. Out of the 68 children, 36 where under the age of five. Among the women there were five pregnant women in the final months of pregnancy. Two of them gave birth in the local hospital in the second half of August. Conditions in that cell were extremely overcrowded. To move around, you had to walk over dirty mattresses lying on the floor. Because of the overcrowding and the poor sanitary conditions, most of the women were complaining that their children were sick and that they had not seen a doctor for days. 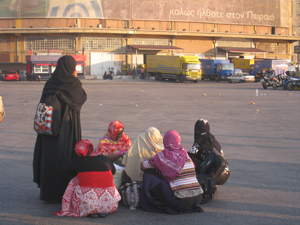 A group of migrants from Lesbos arrive in Athens.

Many of the women who talked to our psychologist and me were in a very bad psychological condition, especially those who had been detained in the center for a long period of time, often for over three weeks. They could not understand why they and their children were being detained there in such bad living conditions. They were in distress and had given up hope, as they were expecting every day to be released from the detention center. They were uncertain about their future and all of them were asking to be released. One Eritrean woman, held there for more than 45 days, threatened she would hurt herself if she was not released. Another Afghan woman told me that she was shocked when she arrived in Greece and was brought to this detention center, because she thought that she had finally reached Europe—the Europe that had taught the world about human rights. So she was asking me why she and her elder mother were locked in there.

Children greet their fathers through bars

Our team was faced with a general situation of distress. Priority was given to the most vulnerable groups: children, unaccompanied minors, and women. When we arrived, women had not been allowed out of their cell into the yard for a few days. One of the first things we did was arrange for the children to leave the cell, and we accompanied them to visit their fathers in the rooms at the front part of the building. That was a very touching moment for us to see the fathers hugging their small children through the bars of the cell, many of them crying. We also asked the police to allow the children to go out in the yard, where we organized some group activities, so that children could make drawings and play. The psychologist was also able to conduct some individual sessions with patients, who needed special attention.

He was worried that his wife and his newborn baby would be brought back to the detention center. He was also afraid that he and his family would die in there.

It became apparent that the situation in the detention center was dangerous and that an immediate solution had to be found so that the 200 unaccompanied minors and 200 women with children would be moved to another facility. In an urgent meeting with local authorities, the UNHCR, and non-governmental organizations (NGOs) working in the center, we tried to emphasize the humanitarian needs of women and young children and to pressure local authorities to find a shelter for them in another facility with better living conditions, where children would not be locked up in cells.

Local authorities came up with a temporary measure to host unaccompanied minors, women, and children in an open holiday camp site in Lesbos. There, women and children could wait for their fathers to be released. Indeed over the next four days many women, children, and unaccompanied minors were transferred from Pagani to the camp site, where living conditions were much better. However, they could stay there for only a few days, until they could obtain a boat ticket to Athens. Leaving for Athens, they held in their hands their release note, which stated that their refoulement—the return of a refugee to their home country—was not possible. They were asked to leave Greece by their own means in the next 30 days.

Two days later, a boat with approximately 300 people, mostly families and unaccompanied minors who had been released from Pagani, arrived in the port of Piraeus in Athens. Among them were two Palestinian families with small children, the mothers of whom were in their eighth month of pregnancy. There was also an Afghan family with a newborn child and two more young children. The aunt of the newborn told me they decided to name the baby Daria, which means “sea”, and kept telling me that she is a Greek baby now, as she was born in Greece.

These families and others, in total 40 people, were stranded at the port having nowhere to go and looking hopeless. After a couple of hours, the municipality of Piraeus took the initiative to host them temporarily in a shelter. While welcomed, this is however an ad hoc temporary solution. Indeed for all these undocumented migrants there is no provision for shelter, food, and—very importantly—access to health care.

Their condition remains extremely critical in a country like Greece that does not ensure a minimum of access to health care for migrant families with young children, unaccompanied minors, and people with health problems, and does not cover their enormous humanitarian needs. MSF is extremely worried about the fate of all these vulnerable people who face a future of destitution and uncertainty.