MSF teams in Guinea were shocked by the degree of violence after demonstrators were attacked and gunned down by security forces in the Guinean capital of Conakry earlier this month. The teams helped treat more than 400 wounded, a third of whom had serious injuries. 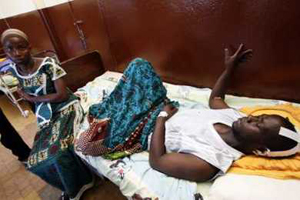 A patient recovers in Donka hospital in Conakry.

Doctors Without Borders/Médecins Sans Frontières (MSF) teams in Guinea were shocked by the degree of violence following events on Monday, when demonstrators were attacked and gunned down by security forces in the Guinean capital of Conakry. MSF helped treat more than 400 wounded, a third of whom had serious injuries, at health facilities in Donka and Matam.

Prior to the violent outbreak, there were indications that the mass protest on Monday could potentially lead to violence. 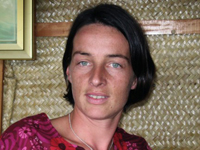 “We spent the early hours pre-positioning supplies in several health facilities in town because we didn’t really know what would happen,” says Christine Jamet, MSF’s head of mission in Conakry. “As the morning progressed and clashes erupted between the demonstrators and the armed forces, we changed locations, setting up in facilities nearest the thick of the fighting.”

MSF teams in Conakry positioned themselves in the Donka hospital and Matam health center with medical staff and emergency medical kits.

“The patients were desperate to get help for bullet wounds, knife cuts, beatings, and rape. We were completely shocked by the level of violence,” Jamet says.

On Wednesday, September 30, many shops in Conakry were still closed and the streets were almost deserted as many people feared to venture outside. Guinea’s capital city remains in a high state of tension.

The priority for MSF now is to reinforce its teams on the ground to prepare for possible further violence. Today and tomorrow, a surgeon, two anesthesiologists, and a psychologist specialized in assisting victims of violence are flying in to Conakry.

“We sincerely hope that the situation will calm down in the coming days,” says François Verhoustraeten, MSF’s program manager for Guinea. “For the moment, there are no more new patients being treated by or seeking assistance from MSF. But we are determined to continue assisting the population to the best of our abilities, should there be any further incidents.”

MSF runs regular humanitarian programs in Guinea, including a treatment program for HIV patients and children in the Matam clinic in Conakry. On Monday, September 28, MSF suspended its activities there in order to respond to the emergency, but the program resumed the following day. A response to a measles outbreak in Beyla, in the southeastern part of the country, will proceed as planned.