Haiti: 11 Days After the Earthquake, Some Changes Visible

The teams are still working hard to treat as many as possible, always trying to save what they can from so many injured bodies. 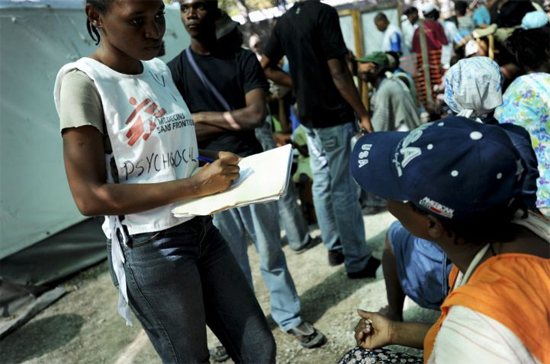 Isabelle Jeanson has worked in communications with Doctors without Borders/Médecins Sans Frontières (MSF) since 2003. She has spent time with MSF missions in Colombia, Russia, Nigeria, and Papua New Guinea, and she served as an emergency press officer in Sri Lanka following the 2004 tsunami. She joined the emergency team in Haiti 48 hours after the January 12 earthquake struck, and filed this report on January 23:

Things are slowly changing. In fact, every day when I walk into our office and our hospitals there are small noticeable changes: supplies are finally piling up in our storage; there is some order to the madness. MSF’s program is also evolving. I was speaking to a mental health expert who was explaining that this phase of counseling is mostly about information sharing—making sure people know where to get health care, explaining what earthquakes are, etc. Only when people are ready will they begin to talk about what they’ve been through. Most have not fully absorbed the impact of what they have experienced. It may happen in a few days or a few weeks, when they realize what it means to lose their house, their family member, their belongings, their job, or all the references to their old life.

Now we are beginning to see cases where the injured who have not gotten care yet are entering a critical phase of septicemia (life-threatening infection), while those who have received treatment must be followed up with fresh wound dressings and bandages. The teams are still working hard to treat as many as possible, always trying to save what they can from so many injured bodies. The decision to amputate a limb is never easy. Our doctors prefer to save limbs whenever possible and will treat the patient first to do this. But gangrenous tissue puts the patient’s life at risk, as the infection spreads to the rest of the body. Amputations can be a shock for our patients. But the decision, as difficult as it, is always done to ultimately save their life. A doctor told me yesterday, that despite the decision to amputate a young boy’s foot, the youngster sought her out to thank her for helping him.

Fortunately, there are more and more organizations setting up activities, mostly in the southwestern region of Haiti around the epicenter. It may cause some confusion in the distribution of aid, for example, when two or three hospitals are set up in the same small community. Ultimately, if people can get the immediate care they need, this is all that matters.

I visited a phenomenal structure today—MSF’s inflatable hospital, located in a football field behind a school in downtown Port-au-Prince. It’s an ideal structure in a setting where people are too afraid to work in buildings. There is a pharmacy, two operating theatres, an in-patient and an out-patient department, and many other services. It is so new, it smells exactly like a brand new dingy or inflatable boat. In this 100-bed hospital we will be able to treat more patients faster without the fear of the walls or roof falling on patients. Our national staff has also started coming back to work. They too will feel safer in such a structure, after the horrific experience of MSF’s Trinité hospital crashing in on their heads.

I saw our little miracle baby again with the amputated arm I met a few days ago in our hospital. A doctor named her Gabrielle, after his own daughter, because we don’t know her real name. It turns out her parents were killed in the earthquake and no one else in her family has claimed her. Not only did she lose her arm, but she also received serious trauma to her head during the quake so had to have cranial surgery. I’m very upset to hear from the doctor later this evening that she’s developed a fever. This is not a good sign for a little baby with such serious injuries. I want her to survive, she has made it through so much already. In a few months, when she has passed the most critical phase, the team will look for an organization to take care of her.

The tremors are also persisting. After the big scare Tuesday morning there were three smaller ones. Just to make sure I don’t imagine things, I’m keeping a half an empty bottle of water next to me on the desk. If the water shakes in the bottle, I know it’s a tremor and not just my imagination.

Tonight there was a huge fire burning in the central part of town. There is talk of people looting and burning buildings. People are asking for work and are hungry. The World Food Program was distributing food near our hospital. There must have been hundreds of people pressing against each other, running after the truck when it tried to drive away. There are makeshift signs in the street, painted letters on bed sheets, with messages like "SOS" and "We need food and water". Everyone is still sleeping outdoors and washing themselves in the street, in the parks, wherever they find a spot they are comfortable with. The trauma of the quake is profound. People don’t talk about it necessarily, but their behavior speaks louder than words.

(Isabelle Jeason is sending updates via Twitter at @ijeanson)