Max Cosci, MSF head of mission in Haiti, describes the situation on the ground in Gonaïves after Haiti was hit by Hurricane Gustav, Tropical Storm Hanna, and Hurricane Ike. 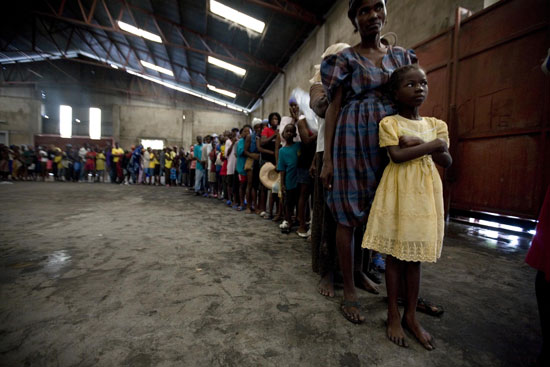 Flood victims wait in line at a food distribution center in Gonaïves, Haiti.

Between September 1 and 7, Haiti was hit by Hurricane Gustav, Tropical Storm Hanna, and Hurricane Ike; 25,000 to 30,000 houses are reported to have been destroyed and 500 people are reported dead, according to authorities. Doctors Without Borders/Médecins Sans Frontières (MSF) staff arrived in Gonaïves, in the north of Haiti, on September 4 and immediately began cleaning out Rabouteau Health Center, now the only functioning health structure in the area. The following day, the MSF team performed 110 consultations, treated 49 injured people, and carried out 16 surgical procedures. MSF is now doing consultations throughout the area. Max Cosci, MSF head of mission in Haiti, is in Gonaïves and he described the situation.

What is the situation of the people there – how are they living?

I think there is still 40 to 60 percent of the town that is flooded, and people are living on the roofs of their houses. There are houses with concrete walls, concrete roofs, so people have arranged themselves on the rooftop. There are many people with this setup, and in other places where the water has receded, the people are just on the street or living in temporary shelters. Apparently, 114 temporary shelters have been identified where there are people, but the estimation is not yet complete. We think there are about 50,000 people without houses.

What are their medical needs and how is their health?

For the moment, the medical situation is not dramatic. We intervened the first day with the wounded, so we took care of the seriously injured people, or all the people that had open wounds because they’re walking in the dirty water and causing their wounds to become infected. Then we started to do surgeries, and followed immediately by consultations. We have a team that provides consultations, while two other doctors and three nurses are providing consultations and referrals; if needed they will do surgical operations in collaboration with the Ministry of Health.

Are there still areas where MSF has not been able to do an assessment due to access problems?

Other than Gonaïves, it is very difficult to get access to affected areas to carry out independent assessments. From what I saw while flying in a helicopter, there is a huge area that is flooded, I think there are several square kilometers. I know that there are still isolated places that we haven’t seen, simply because we do not have many helicopters and the only helicopters at the moment on the ground are military helicopters. The last intervention we did was three days ago (Saturday, September 6)—we went into a hilly area where people had found a dry place, where they stayed without food and water for five days. We took the wounded back with us in a UN helicopter and left food and water there.

A series of hurricanes and tropical storms have left tens of thousands of Haitians homeless and without food, shelter, and clean drinking water.

Has there been a strong national response to this disaster?

Since the water supply has been contaminated, have you seen the effects of people having to drink unclean water?

Yes, especially in isolated areas, people can stay a couple of days without drinking water, but then they absolutely need to have some. So people are starting to drink dirty water and this already has caused the first dysentery cases. The good news from yesterday was the rain, as people started to collect the rain water. I suppose now they have a small stock of water for a couple of days. But of course this will finish soon and so the urgent need for the moment is distribution of clean water.

Right now we are concentrating on health needs and treating the wounded. I arrived here with the first UN helicopter on the first day, and I could only bring medical equipment because of weight and volume limits in the helicopter.

What is your team focused on right now?

At this moment, I’m trying to coordinate the operations for all the health activities. We have a team that is active in a small health center that is the only health center with a surgical capacity; they have been working there since Wednesday. The hospital has been flooded and is out of use for the moment and the health centers in many places are not accessible. I’m doing a bit of everything right now because there are logistical needs and there is a lot of cargo arriving, which I am trying to organize.

Have you seen any patients whose situation particularly affected you?

We went with our car to pick up a woman because her husband came and said she had delivered. She had delivered during the storm, and she lost the baby, so they buried the baby immediately. The father told me he just dug a hole in the ground and put the baby inside and then he came to call us to rescue the wife. She was hemorrhaging from the birth, so we took care of her but now she is fine. But they lost the baby.