Isabelle Jeanson has worked in communications with Doctors without Borders/Médecins Sans Frontières (MSF) since 2003. She has spent time with MSF missions in Colombia, Russia, Nigeria, and Papua New Guinea, and she served as an emergency press officer in Sri Lanka following the 2004 tsunami. She joined the emergency team in Haiti 48 hours after the January 12 earthquake struck, and filed this report on January 26:

In any tragedy there are miraculous moments. Today I learned of one of those moments and was witness to another. 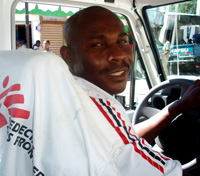 Christobal, an MSF driver and a very brave man.

The first was revealed during a privileged and lengthy discussion with a young man named Christobal who works with us as a driver. We’ve been on the road the past two days, in the northeastern part of the country, to assess the health needs of Haitians who had fled Port-au-Prince. In the aftermath the earthquake, there had been an exodus from the city. Thousands of people went to rural hospitals in search of the health care which the overwhelmed capital could no longer offer.

Before we set off this morning, though, Christobal and I had a moment to chat. I asked him, as I’ve asked all our staff, about his experience during the earthquake. He explained that although his house had been destroyed, his wife and two young sons survived. They now sleep in the street like everyone else.

The day after the earthquake, however, he still reported for work. And when he showed up at the MSF office, he learned that one of our expats had been buried alive after the house she lived in was destroyed. Two floors had landed on top of her, but one of Christobal’s colleagues had somehow heard her muffled shouts. It would have taken 48 hours, at best, for a clean-up crew to get there with a crane. Christobal and three of his colleagues couldn’t wait that long. They convinced the head of mission to let them dig her out of the house themselves, with their bare hands.

There was, of course, a big risk that doing anything could further destabilize the structure and kill them all. But, regardless, around 11a.m. on January 13, approximately 15 hours after the earthquake struck, Christobal and his colleagues started pulling away pieces of concrete and twisted shards of metal and debris. They created a tunnel just wide enough for one person to crawl through on his stomach. At one point, Christobal said, as a colleague was pulling himself deeper into the tunnel, an inch at a time, an aftershock hit. The building shook but nothing toppled or shifted dramatically. Eventually, about five hours after they’d started, they made contact with the expat, and slowly pulled her out.

She escaped with cuts and bruises and, fortunately, no broken bones. Her survival was indeed miraculous. But the bravery and selflessness Christobal and his colleagues displayed is deeply humbling. At no time did he or his colleagues think twice about risking their own lives to save hers. I don’t know if I would have the courage to do the same. As he said to me this morning “There is no tomorrow. There is only today, and living for today. Because we just don’t know what can happen tomorrow.”

The second miracle occurred later that morning, in the hospital in Dajabon, a town just over the border of the Dominican Republic, about 10 hours by car from Port-au-Prince. We were assessing the needs of patients who had headed towards the Dominican Republic after the earthquake. As we stepped into the post-operative ward, a sickly young woman gestured to me to come to her bed. When I approached, she whispered something in Spanish. It was barely audible but I quickly understood that she was actually Haitian. “I’m a nurse,” she said. “I was working for MSF in Port-au-Prince when the earthquake happened.”

“You were working at the maternity hospital?” I asked.

“Yes,” she answered. “I was injured in the earthquake, but my family found me and brought me here to Dajabon.”

Earlier this morning, MSF observed a moment of silence in the memory of staff members who had been killed in the earthquake and those who had not yet been accounted for. The chances were incredibly small that I would find one of our missing nurses in a hospital bed in the Dominican Republic. I was so grateful to reconnect a missing link of the MSF chain. And to witness another little miracle.