"Most of the patients present with physical complaints and symptoms such as loss of appetite, memory problems, sleep problems, cardiac palpitations, flashbacks of the event," says MSF psychologist Djénane Marlhen Jean Charles. 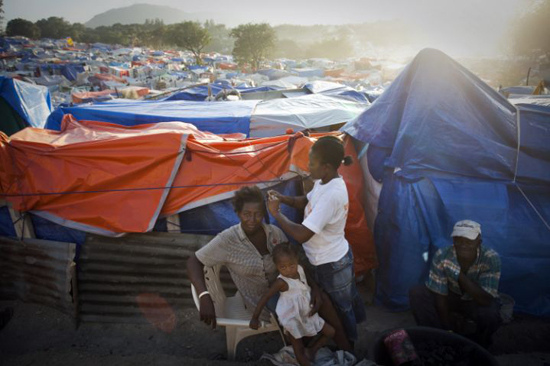 A woman and children sit in front of thousands of tents that spread across the Pétionville Golf Club camp.

At daybreak, a crowd of displaced people gathers in a narrow street leading to the Doctors Without Borders/Médecins Sans Frontières (MSF) clinic at the Pétionville Golf Club. People waiting to see a doctor say they suffer from respiratory problems, fevers, and infections brought on by the rains the night before. Around the medical facility, families repair their improvised  tents, women wash clothes that are already soaking wet, and mattresses lie exposed to the sun. The scene illustrates the complications of life inside Haiti's camps.

Inside the clinic, a team of psychologists has just completed the morning’s psychological education session. In these meetings, doctors provide information about normal stress and trauma reactions, teaching patients positive coping mechanisms that will help them understand the   psychological consequences following a traumatic event. "Most of the patients present with physical complaints and symptoms such as loss of appetite, memory problems, sleep problems, cardiac palpitations, flashbacks of the event," says psychologist Djénane Marlhen Jean Charles, a member of the local medical staff since 2006. 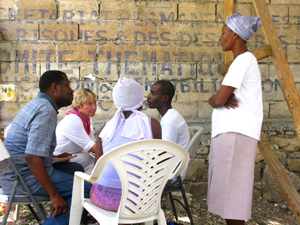 To help patients cope with anxiety and stress, MSF offers relaxation techniques and counseling sessions. "This strategy works 80 percent of the time,” says Charles. “However, if a patient presents with severe or psychiatric symptoms and requires medical attention, we refer to a psychiatrist and continue to offer psychosocial support.” The patient may be referred to the St. Louis medical center where MSF treats those suffering from severe psychiatric distress.

MSF supports and helps individuals who experience fear, sadness, anxiety, concerns for the future, and feelings of hopelessness. For many people, however, moving forward proves difficult: when the ground continues to shake, and home is a golf course that lacks drainage or an organized system of latrines. Without concrete solutions to the situation they face, the need for psychological support is great.

Interview: 'A state of complete confusion of land and body'

Dr. Maryvonne Bargue is an MSF psychiatrist who leads a mental health team of 19 people. In an interview at the MSF Saint-Louis Hospital in Port-au-Prince, Dr. Bargue explains in depth how people still feel the earthquake's psychological aftershocks four months later.

Are people here still suffering from the psychological impacts of the earthquake?

Four months after the earthquake, many people remain in what I would call a state of complete confusion of land and body. Most of my patients are afraid of being swallowed up by the earth. The earthquake is literally in their body and the noise is always present. They have major sleep disorders. They live in a constant state of fear and continue to have flashbacks, during which they reexperience the awful moment of the quake. In April alone, I saw 70 patients who were in a state of acute delirium, confused and unable to think clearly. Many have stopped speaking and eating. They are in a state of mutism and complete stupor. After two or three weeks of sessions, they improve. I try to speak in their place and, gradually, they become a bit more present and begin to return. There are also people who are grieving deeply and who present with depression and melancholy.

Is there a way for them to commit to the future?

I would say that they are somewhere between nostalgic and discouraged, but they do not have a sense of resignation. Many patients tell me, "We will never get through this." All the walls may have fallen down here, but these people are facing a wall. Four months after the quake, not much has changed. "Will we be able to go back home?" Their houses are gone. In the best of circumstances, they have a tent. It's almost a luxury to have a tent, but it's not a house. The people in the camps are living in crowded, unsafe, and violent conditions. The conditions are nearly unbearable. Many people had small businesses that were swallowed up by the earthquake. Living conditions are horrific and many people think that things will not change.

What are MSF's primary activities in the area of mental health?

I lead one of MSF's mental health teams. It is composed of 19 people, including 13 Haitian psychologists, a psychiatrist, a psychiatric intern, a social worker, a children's activity leader, and two interpreters. We focus our activities within MSF's medical facilities and in the camps where earthquake victims live. We also visit local organizations. We hold between 35 and 40 individual sessions every day. That means the consultations are short but you can say a lot in ten minutes, you know. I see each patient at least once a week. If they are in an acute state or delirious, I see them every other day. We also hold group psycho-social sessions, targeting people of the same age, such as children, for example.

What is the advantage of being a psychiatrist in this situation?

There are only eight or 10 psychiatrists today in all of Haiti. As a result, many psychotic people are referred to me. I am both a psychotherapist and a psychiatrist, so I can prescribe medication. This can make a difference for people who have trouble sleeping, for example, or for those who have undergone amputation or become paraplegic as a result of the earthquake.