Haiti: The Forgotten People of Praville

For several weeks, MSF helped support the Rabouteau Health Center in Gonaives. It reopened a hospital in another part of town while also organizing water distribution. MSF continues to witness difficult situations and documents the stories of some of the people still forgotten weeks after the last storm.

Praville is one of those small hamlets in Gonaïves, in the north of the country, partially located on a raised piece of land and, therefore, partly protected against the torrents of mud which ravaged the fourth largest city in the country. It is here on rocky ground that numbers of families who lost everything settled. The wind-swept land is vast and offers a broad view of the ocean. But the idyllic description stops here.

Tents have to house two to three families. Here and there, organizations come to bring help; three latrines were built in the centre of the camp, and drinking water is brought nearby. Medical care is offered twice a week, but food still remains to be seen. 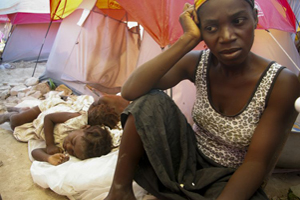 A native of Parc Vincent, Viola is 28 years old. After the cyclone, a friend sheltered her and her children. Due to lack of space, she had to leave after a week. She is out of work and does not know how she will afford even the cheapest remt. Her children will not go to school this year. There is no money. But Viola is worried mainly for their health; they are feverish and have flu-like symptoms.

She is alone here with her four children, aged 1 to 11. She really doesn’t know where her husband is. On September 23, she received two rice and two bean containers, but nothing since.

Angeline is 22 years old. She lives on Francius Alley, in the K-soleil area, one of the most ravaged sectors of Gonaïves. Five days ago, Angeline gave birth for the first time, here in this tent, helped only by one man from the camp. Kelly Arisma is the first baby to be born in the Praville camp. Eighteen people, 10 adults and eight children, sleep in Angeline’s tent every night.

The Venezuelan consulate had promised her milk powder, but that remains to be seen. To feed herself, Angeline eats flour mixed with water and, on rare occasions, some rice.

This 67-year-old woman lives under a tent with her husband, children and grandchildren; total 15 people in all. Fatal remembers Hurricane Hazel in 1954 and Jeanne in 2004 well. But it is Hanna that took everything from her. Her home on Roland Alley, in the K-Soleil area, was completely destroyed, taken by the mud.

Since arriving here, she sleeps very little; the stones under her tent prevent her from sleeping.

Marie Augustin is a 40-year-old mother of six. She is expecting her seventh child who should be born within the next two months. Their home and their business on Liberté Street were completely destroyed by the mud. Everything was ready for her children’s school year, books and all. Hanna took everything.

She doesn’t see how her children can attend school this year. It is the birth of the next child that worries her particularly while she still has not received any food aid for her family.

Dérilene is 30 years old and has five children. Dérilene is sad and angry. Wisleine, her last one, is in her arms; the doctor who saw her, announced that the little one was anemic and malnourished, but no drugs or therapeutic foods were administered to her after the consultation.

At the end of September, MSF re-opened a hospital in Gonaïves in cooperation with the Health and Population Ministry. This structure is the only one in the whole region devastated by the recent hurricanes and the tropical storms which can respond to emergencies, obstetric and pediatric services.

During the last three weeks, this structure has already received 675 patients in the emergency room and performed more than 110 deliveries, as well as 52 surgery interventions.

MSF has also distributed 5,000 family kits (including plastic sheeting, soap, jerry cans) to cover the needs of as many people as possible who are left with nothing. Another 5,000 kits are planned to be distributed. MSF is producing one million liters of drinkable water per day and still distributing the largest part of it.

Our mobile medical teams continue to travel by car, horse and foot around town and its surroundings to provide assistance to the most vulnerable people in their temporary shelters in Gonaïves or the nearby isolated villages. Since September 12, our teams have performed more than 4,000 consultations in their mobile clinics.