Haiti: "It's Going to be a Very Long Recovery"

MSF International President Dr. Christophe Fournier reflects on his time in Haiti and the many challenges to come. 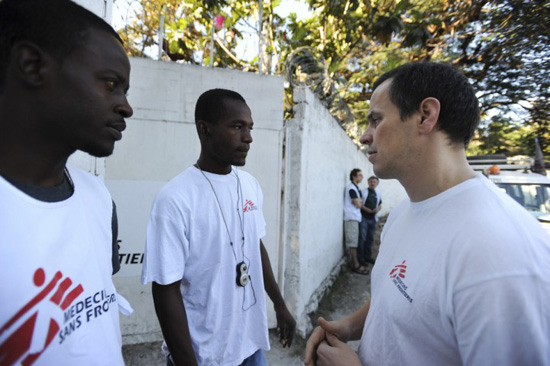 Dr. Christophe Fournier, the International President of Doctors Without Borders/Médecins Sans Frontières (MSF) went to Port-au-Prince to offer his moral support to Haitian staff and emergency teams. Just over two weeks after the earthquake, he described his impressions to MSF's Avril Benoit:

What I’ve seen is doctors, nurses, surgeons, logisticians, being able to treat hundreds, not to say thousands of patients–first in the streets, on sidewalks, behind or in front of the collapsed hospitals, in conditions that you cannot even imagine–but these people, all these MSF doctors, nurses and surgeons, being able to treat these patients in these very difficult conditions and save their lives. And then, an incredible work from them as well, being able to transfer these patients from the streets where they were, to new hospitals that they had cleaned, or hospitals made of tents. All of this was very impressive. It had a huge impact in terms of life-saving and number of patients treated.

What worries you most, then, about the health conditions right now for Haitians?

Well there’s one thing. We’ve treated so many patients. It’s largely now over 6,000 patients that we’ve treated because they were injured. We’ve also performed over 1,000 major surgical interventions, amputations among them, of course. Now, what worries me the most is our ability to absorb the number of patients that still need to be hospitalized. We need to increase the number of beds we have for them. We’ve got to set up new tents, a little bit everywhere in the city, but also to create villages of convalescence where patients will be accommodated with their family and still receive the visits of nurses and doctors, physiologists, psychologists, to slowly recover from their injuries, both organic and mental injuries.

We do hear a lot about post-operative care. Can you explain what that involves, exactly?

There are a number of patients who have infected wounds, because they have not come to the hospital in time. Staying around their collapsed houses, they have got some infections to their wounds, and this needs very, very long treatment now to stop this infection, and slowly work on stitching and healing their wounds. We have also all these people we have had to perform amputations on, and it’s going to be a very long recovery [for them]. So you see that due to the nature of all the wounds of all these people, their convalescence will be quite long now.

You know, just to give an example, right now I have something in mind, this lady that I helped to transfer from Leogane. That is a city south of Port-au-Prince, which was also hit by the earthquake. This lady stayed in her collapsed house during three days. Among other things she lost her left eye, so we have to remove not only her eye—that was already dead—but also what is around her eye. And that was what we were able to do on the spot, in the hospital, in this small city of Leogane. But then, because she stayed, during three days in her collapsed house, she was also infected, [and the infection was] spreading into her body. She was really critical because of that infection. so that’s the reason why we transferred her by helicopter to the new hospital that MSF was able to set up here in a very short time, where we have intensive care units, emergency doctors, anesthesiologists, that will be able to handle her case.

I could also speak about this case of tetanus. We have more and more tetanus cases, because again, these people have been staying in what remains of their houses, trapped [for] days. And I remember that little girl suffering from tetanus, she almost died about it, had heart failure at some point. We were able to resuscitate her, again, in the street, and then we managed to treat her. And after a couple of critical days now, she’s little by little recovering. We were all very happy to see that but this tells you about the nature of these wounds because of the infections, including tetanus that they have gotten, after staying in the houses like this.

Many people are concerned that so many Haitians are dying, but at the same time with all the efforts underway—and not only from MSF—many lives are being saved. As you’re leaving, any thoughts on the effort that’s underway, and the amount that it’s helping?

What is striking to me is that in the very chaotic situation and [with the] remarkable lack of coordination between the United Nations, all these aid workers, militaries—you know, from the Minister or from the U.S. army, a chaotic situation that you usually see in any kind of events like this, like an earthquake, for example—but in this whole confusion, MSF has been able to treat many, many patients—again, thousands of patients—effectively. And [MSF] has also been able to set up all these hospitals made of tents, or [has been] finding buildings that are not collapsed to organize around. And they are remarkably efficient. You know, before the earthquake, the health system in Port-au-Prince was already collapsed, and that’s the reason why MSF was so much involved already in Port-au-Prince, doing surgery, having a big maternity ward, which was doing more than 1,000 deliveries a month because of the important problem of maternal mortality in Port-au-Prince

This problem will remain. Not only do we have now to deal with an incredible amount of injured people, people that will have a life-long handicap, but also we will have to try to resume as soon as possible the hospital capacities that a capital of three million inhabitants needs. And that’s going to be also one of our priorities for the weeks or months to come.