“The immediate emergency phase may be over, but the long-term work is just beginning, and it’s no less an emergency,” said MSF Haiti head of mission Karline Kleijer. 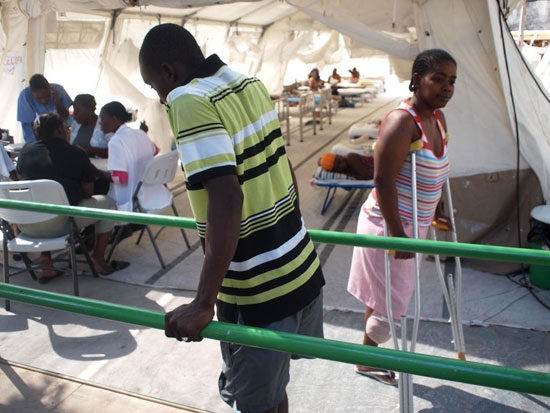 Seven weeks after the earthquake of January 12 left up to 300,000 people injured, medical needs remain immense in Haiti. “The immediate emergency phase may be over, but the long-term work is just beginning, and it’s no less an emergency,” said Doctors Without Borders/Médecins San Frontières (MSF) Haiti head of mission Karline Kleijer.

Thousands of injured people remain in need of long-term care but some of the health providers that responded to the initial emergency phase of the crisis are starting to leave the country and discharge their patients. In recent days, public hospitals and medical teams preparing to depart have referred more than 200 patients to MSF medical facilities. 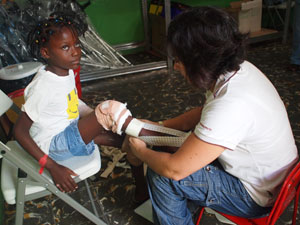 In response to this and the overall medical dynamic in the country, MSF is expanding its capacity to deliver extensive post-operative services—including secondary surgeries, medical follow-up, physical therapy, and mental healthcare—for at least the next several months. MSF will soon open additional post-operative facilities in Port-au-Prince, Carrefour, Leogane, and Jacmel. These facilities will have a total of approximately 1,000 beds and will operate for at least one year.

In many cases, patients who endured weeks of immobilization as a result of traction, casts, external fixators, and amputation, are just beginning to regain mobility through physiotherapy. People who had limbs amputated may require additional procedures to ensure that they can eventually accept artificial limbs. “Returning patients home in their current medical—and living—conditions is simply not an option for us,” said Dr. Michel Janssens, director of the MSF hospital in the St. Louis neighborhood of Port-au-Prince. The hospital, which was established on what was a soccer field, will remain on-site and operable for at least one year.

Survivors of the earthquake are often very anxious about their future. "I was an electrician, and who's going to hire a disabled person?” asked Ricardo, a 33-year-old father who suffered severe burns to his hands in the earthquake. “How will I find work to support my family?” Because so many Haitians endured such a  profound trauma and are now dealing with great uncertainty, MSF is also offering mental health services throughout the capital and in other locations as well. Psychological monitoring and counseling are critical elements of postoperative care, as vital to the recovery and rehabilitation process as physiotherapy and learning how to use crutches.