Haiti: MSF Teams Adapting to Needs on the Ground

The team that built MSF’s inflatable hospital in Port-au-Prince is now working on a plan to create a post operative "village" in the city. 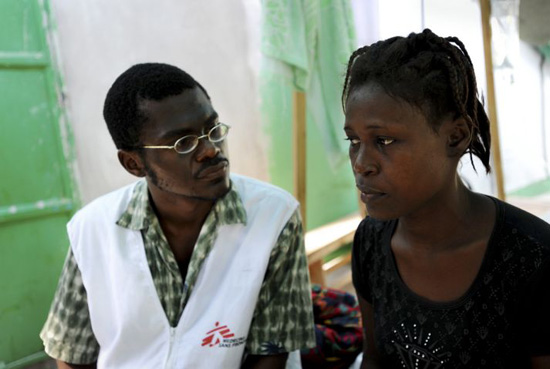 MSF staff member talks to Astride Louissaint, a patient trying to deal with her own injuries and the loss of her mother, who's been missing since the earthquake

Haiti: Two Weeks After the Earthquake, Needs Are Changing

The core medical activities in Haiti are still very much focused on treating people who were injured in the January 12 earthquake, with surgery continuing and post-operative care expanding. But as Doctors Without Borders/Médecins Sans Frontières (MSF) Emergency Medical Coordinator Rosa Crestani explains, there is a new phase underway. "While we have done life-saving interventions so far, we need now to be able to do more limb-saving interventions. That means operating on people with wounds that are getting infected and which may infect the entire limb in a few days unless they undergo surgery.” To deal with the demand for this type of care, Crestani says, MSF has opened third operating theater at the Choscal hospital in Cite Soleil. “MSF has also started running mobile clinics to search for people who need urgent care, but who had been unable to get any yet,” she adds.

The wider and longer-term consequences of the disaster are also very much on the agenda of MSF teams. The psychological impact of the disaster is becoming more apparent in the symptoms being seen at MSF's general clinics; one, in Leogane, reported that approximately half of the people receiving treatment were suffering from mental trauma. Nutritional deficiencies are also becoming readily visible. Near MSF's hospital in Carrefour, where the medical staff has been running clinics for the people in the surrounding areas, teams are starting to provide supplementary feeding programs for some of the children.

All work continues around the clock. Over one eight-day period, for example, that same hospital in Carrefour carried out 208 major surgical procedures and 100 minor ones. The staff bandaged 2,400 other injuries and admitted 446 people to their wards. After an aftershock last week compromised the safety of the building, patients were transferred first to temporary tents and then to a new facility that was set up nearby in what had been a school building.

At the same time, MSF’s efforts to expand its services are ongoing. The team that recently built MSF’s inflatable hospital in Port-au-Prince is now working on a plan to create a post operative "village" in the city. The wards would again be made of canvas, thus alleviating the fears many people still have of being inside a building if another quake hit. The village will provide nursing care and wound dressing along with physiotherapy and psychological assistance for approximately 100 post-operative patients.