Haiti: MSF Treats Over 160 Victims of Violence in Port-au-Prince

Despite relative calm, MSF continues to provide medical care to those injured in latest round of civil unrest 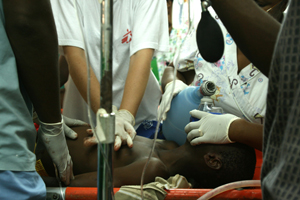 Medical staff provide emergency care to a wounded patient brought to the MSF health center in the Martissant neighborhood in Port-au-Prince, Haiti.

As an eerie calm settled on the center of Port-au-Prince on April 10, Doctors Without Borders/Médecins Sans Frontières (MSF) teams are continuing to receive patients suffering from trauma injuries, especially in the Martissant and Carrefour neighborhoods of the city.

“Between Monday, April 7, and Thursday, April 10,  MSF teams have treated more than 160 people injured during violent clashes, including 44 gunshots wounds, in MSF-operated hospitals in the Haitian capital city, Port-au-Prince,” said Jessica Neerkorn,  head of mission for MSF in Haiti.

Most of the patients were wounded when demonstrators in the city protested against rapidly increasing living costs, especially sharp increases in the price of basic food items. On Thursday morning, fighting erupted in the Carrefour and Martissant neighborhoods.

Although the country experienced a fragile stability in 2007, few medical facilities in Port-au-Prince can provide treatment to wounded patients on an emergency basis. With the demonstrations, most public health structures come to a virtual halt and were unable to function.

From Monday to Wednesday the demonstrators’ barricades prevented public transportation throughout the city, while a truck drivers’ strike protesting rising fuel prices had already reduced transit. On Thursday morning, it was easier to move around the city.

Since Monday, an ambulance system set up by MSF has been transferring wounded patients from the center of the city, specifically from the Champs de Mars. While the capital seemed quieter on Thursday, MSF teams continued to receive wounded people. MSF is also taking advantage of a temporary lull to prepare medical facilities for continued violence should the situation deteriorate.

MSF has been working in Haiti since 1991. MSF currently operates four health centers in Port-au-Prince. MSF provides emergency trauma care at Trinité hospital, at Delmas 19, where it has treated more than 8,000 victims of violence since 2004. In the Pacot district, MSF provides post-surgical physical therapy in a 48-bed health center and also treats victims of sexual violence.

At the 70-bed Jude Anne Hospital, which opened in March 2006, MSF has provided labor and delivery care to more than 18,000 women. In Martissant, MSF manages a health center and operates mobile clinics in one of the city’s poorest neighborhoods. Since December 2006, more than 200 patients with gunshot wounds have been treated in MSF’s Martissant health center.