Haiti: New Life Amid the Rubble

MSF has been providing emergency obstetrics care for pregnant mothers. 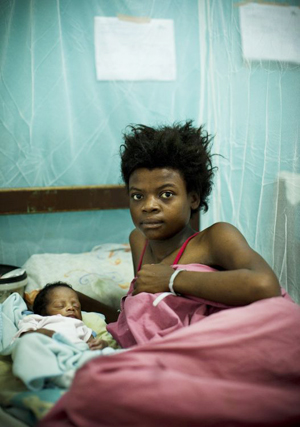 Djenny and her newborn son, Mike, who was born a week after the earthquake, lying in the maternity ward of Chancerelle Hospital.

After the earthquake, 18-year old Djenny was one of the first women to deliver a child in Isaie Jeanty hospital in the Chancerelle area of Port-Au-Prince. Assisted by the MSF team, Djenny gave birth to a healthy little boy, Mike, and they have since been joined by many others in the now-bustling maternity ward.

Before the earthquake, Isaie Jeanty hospital specialized in obstetric and maternity care. However, to meet enormous surgical needs, MSF, working together with staff from the Ministry of Health, began to offer a wider range of services, including orthopedic surgery, post-operative care, physiotherapy and mental health support. Yet, Isaie Jeanty continued to remain a referral centre for maternal care, with MSF helping deliver an average of 12 babies each day, more than 40 percent of which are caesarian sections.

“We’ve delivered so many premature babies as a result of trauma,” says Eva de Plecker, an MSF midwife in Isaie Jeanty. “Women are coming to us with pre-eclamspia or eclampsia - serious conditions exacerbated by stress. Though Haiti had an extremely high rate of eclampsia before the earthquake, the massive toll of this disaster has probably further aggravated the condition.”

Pre-eclampsia and eclampsia cause high blood pressure, excess protein and swelling, and can lead to seizures, heart failure, and even death to mother and baby. Providing quality emergency care, including a cesarean section, can save the lives of both mother and child.

“After a few days, the maternity ward here reached full capacity. Women with serious complication need a longer time to recover after birth. At the same time, we still have to keep making space for new mothers and babies that need our help,” continues Eva.

At the weekend, MSF transformed a small stock room in the hospital into an additional maternity room, increasing the number of beds from 18 to 40. Yet, it’s not just recovery time that can prolong a new mother’s stay in the hospital. With thousands of families sleeping on the streets, many Haitian women have no homes to bring their newborns to after a safe delivery.

Little Mike now faces a daunting future, as Djenny lost everything during the disaster. Her home completely collapsed, she has no news of her family, and she believes that Mike’s father was killed in the earthquake.

“Under normal circumstances both Mike and Djenny would have left the hospital, as they are fine. But they have no-one, so we’re trying to find somewhere for them to go before they are discharged,” adds Eva.