Read the accounts of three patients treated at MSF's Nap Kenbe Center, a new referral facility for emergency trauma and orthopedic and visceral surgery in Port-au-Prince. 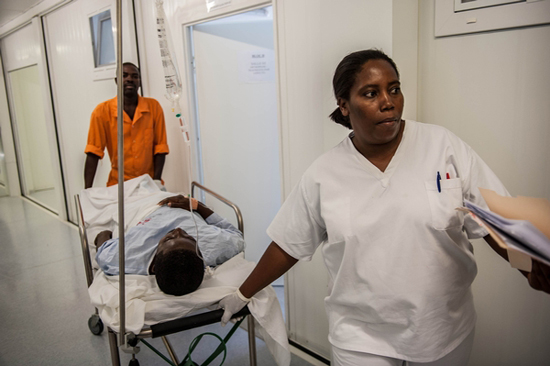 Doctors Without Borders/Médecins Sans Frontières (MSF) has officially opened a new emergency trauma and orthopedic and visceral surgery referral center in the Tabarre neighborhood, in the east of Haiti’s capital of Port-au-Prince.

In a country where 75 percent of the population live below the poverty line, and where referral facilities are vastly inadequate, the Nap Kenbe Center will improve access to surgical care for the population of the Port-au-Prince metropolitan area.

Broken leg and deep lacerations. Recovering from surgery and a skin graft on her injured leg.

"My name is Dorluce Merlie and I am 34 years old. I live with my 13-year-old girl in the Carrefour district of Port-au-Prince. I have a small business where, since the age of 20, I sell spices. But 10 days ago, I was seriously hit by a tap tap [bus]. The driver was competing for passengers with another tap tap driver. Suddenly, I was caught between the two tap taps and I screamed with all my strength to stop them. But it was too late. My leg was caught between the two vehicles. In hindsight, I feel that the driver did it on purpose to get me because he was furious. But we'll never know because he fled immediately after he committed the crime.

I was left lying on the ground, unable to move. I could not get up and I thought I would die. Fortunately, bystanders came to help me and a police car arrived on the scene to take me to the MSF hospital in Martissant. But along the way, the police car broke down. So we had other people on the street help me to the MSF health center. The blood was coming from everywhere and we could easily see the flesh and bones of my leg. It was not pretty. I could not watch it because I thought that the entire lower part of my body was cut in two.

“I should be dead today if I had to pay for the care I received here.”

It was from MSF that I received first aid. First the wounds were washed and then I made a big bandage. I was a little relieved, but I was told that I should have a surgical operation. This was good news indeed because the doctors felt that I was not going to lose my leg. The next day I was taken to MSF's Nap Kenbe Center to undergo my operation. The trip there was a real ordeal of pain. The pain was so excruciating. When I arrived at the Nap Kenbe Center, the doctors immediately removed the dead flesh of my leg. Then, during a second surgery that lasted over four hours, they were able to use healthy skin from my left calf to perform a skin graft to repair the wound in my leg. Now I should stay in bed for about three weeks for the wound to heal properly and well.

It will now be difficult to return to work in my small shop. While I am in bed and unable to work, I must still continue to pay for the schooling of my 13-year-old girl, in addition to taking care of her. This is not the first time this type of accident has happened in Port-au-Prince. Drivers and motorcycle riders are inconsiderate and do not protect themselves or passersby.

I should be dead today if I had to pay for the care I received here. And this is a situation that often happens, as many do not have money. I know several people who have the same accidents with cars or motorcycles and who became completely indebted, often to die lonely.

I am now waiting for the recommendations of doctors to know what my future will be and if I can possibly go back to my work. For now, I hope for the best and seek help from my family and friends to support my daughter. But even if I was saved from death, I know the coming months will not be easy.

Victim of an armed robbery; shot in the abdomen

My name is Markenson Docile. I'm 17 years old and I live in the Tabarre region with my father. We live in a small room, and I work as a motorcycle taxi driver in Cité Soleil. The robbery happened very quickly and I can’t remember everything. It happened 10 days ago. It was late in the day, and as usual I was driving my motorcycle taxi, when suddenly a gang stopped me in the street by a dam. I slowed my bike and it was then that I realized that one of them was armed. Very quickly I tried to accelerate, but one of the three fired a shot at me, hitting me directly in the stomach. At the same time, I saw that the police were coming towards us at full speed. They went after those who shot me, but they had already escaped into the woods nearby. As they couldn’t find the thieves, the police took me to the nearest bus station and put me in a taxi. The driver took me to the hospital and also contacted my family to tell them of my misfortune.

“Even if all the members of my family had pitched in, they would not have come close to being able to pay for the care I received at the MSF hospital. You could say that it really saved my life.”

When I arrived at the MSF hospital, I was still losing a lot of blood. We tried to stop the bleeding and then I was immediately transferred to the operating room. At that time I lost consciousness, and I woke up seven days later. My parents came to see me and that's when I realized I was still in hospital. At Nap Kenbe I received medical care that would have been impossible for me and my family to pay for. Even if all the members of my family had pitched in, they would not have come close to being able to pay for the care I received at the MSF hospital. You could say that it really saved my life.

The doctors said the bullet hit me in the lower abdomen and it cut through my colon. On day one, I had surgery to explore my abdomen, repair my damaged body, and locate the bullet. But the doctors did not find it, so they had to operate on me a second time to extract the bullet before it became infected. At the moment I am taking drugs for the pain, but I am getting a lot better. I expect to be discharged in 20 days, if all goes well. Once I get back home, I will still receive care from a distance. After all this misadventure, I hope to go back to my job as a motorcycle taxi driver, because it's the only thing I can do.

Fractured right femur in an accident at school

My name is Harry John Junior and I'm 11 years old. I broke the femur in my right leg on February 15 at my school, in Carrefour neighborhood. At the moment I’m in sixth grade and I’m due to take my final exams in June. When the accident happened, I was leaving the classroom. Suddenly, a student who was running very fast in the corridor crashed into me by mistake—I think he hadn’t seen me coming. When we collided, I fell hard onto my back and he fell on my right leg. My leg felt very hot and painful. A teacher took me straight to the school infirmary, but my leg hurt so much that nobody could touch it. The head teacher decided to send me straight to the MSF hospital in Martissant, which is not too far from our school.

I was in pain the whole way there, and to make it worse, there was a large truck blocking the way. I was very relieved to arrive at the hospital. I was quickly put on a stretcher and a nurse took charge of me. I remember her lifting me with strong arms. She held my foot and leg and moved them around. It hurt so much that I yelled with all my strength. I think I almost bit the nurse! After that, they put on bandages and a brace to keep my leg still. Then I was transferred to Nap Kenbe Center by an MSF ambulance, with another boy of my age who had also had a fall. At Nap Kenbe I received all the care I needed. First they undid the brace and then they put a cast on my leg during surgery.

“At Nap Kenbe I received all the care I needed.”

Even though my mother had paid medical insurance at my school, it could not help me directly, because it would have had to instantly pay out the money, which she didn’t have with her. At the time of my accident, my mother didn’t have enough money to pay for an operation like I needed. And the first aid would also have cost her far too much in a private hospital.

My mother also told me that if I was in a public hospital, the service would have been slower and there might have been flies landing on me. But I don’t think so. In any case, the service here is impeccable and I am being very well treated. And the room is really clean. And when I am cured, I’m going to go and visit a public hospital to better understand what my mother has told me.

According to my mother, the MSF hospital improves care for all the residents of Port-au-Prince. In addition to free healing and giving back life, patients can also continue to be cared for by their families with the money they did not have to spend. That is why it’s the best.