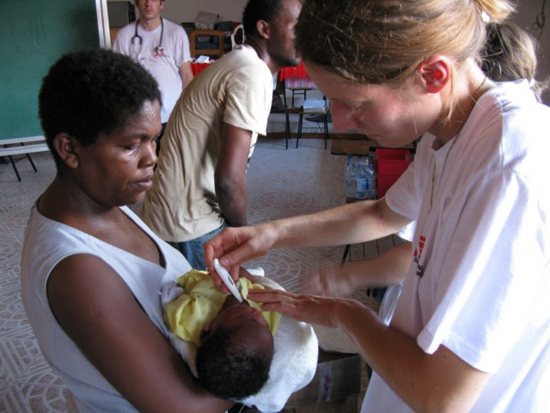 MSF medical staff takes a baby's temperature during a mobile clinic in Gonaïves.

With the floodwater now fully receded in storm-ravaged Gonaïves, the streets are covered in mud and garbage. People are living in harsh, dirty conditions without widespread access to clean water.

Since its arrival in Gonaïves on September 4, Doctors Without Borders/Médecins Sans Frontières (MSF) teams have carried out 2,329 medical consultations at the Rabouteau Health Center, which MSF helped restore following the tropical storms and hurricanes that devastated much of the city in late August and early September.

For the last 12 days, MSF has been operating mobile clinics out of shelters, schools, and some orphanages in Gonaïves. Teams have also traveled by helicopter to some landlocked villages on the outskirts of the city. Mobile clinic teams have so far performed nearly 600 medical consultations. The team is also providing mental health services to displaced persons, especially to the elderly and children.

Following the peak of trauma cases resulting from the storms and floods, many more people are suffering from the unhygienic and precarious environment in which they now find themselves. Common pathologies include diarrhea, dehydration, respiratory infections, and skin diseases. Cases of malaria are now beginning to appear and there is concern that the unsanitary environment could lead to certain epidemics, such as dysentery or measles.

The MSF team in Gonaïves consists of 16 international staff—among them seven medical personnel, six logisticians, an emergency coordinator, an administrator, and a person in charge of health promotion—working alongside one hundred national staff.

Of 558 children less than five years of age examined at the Rabouteau clinic, 12 have been diagnosed with severe malnutrition and 62 with moderate malnutrition. All are being treated with nutrient dense, fortified ready-to-use foods. The MSF team is monitoring an additional 92 children at risk of becoming malnourished.

MSF is monitoring the food security situation, which, while precarious at the best of times, has been made worse by the storms. 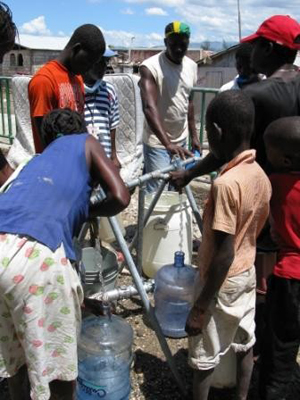 An MSF logistics team, in partnership with Haiti’s ministry of health, is currently working to complete construction of a 70-bed hospital, which should open in the coming days.

Needs Assessed Elsewhere in the Country

In the northwest of Haiti, MSF teams have traveled to Port De Paix via Anse Rouge, Bombardopolis, Jean Rabel, and Chansolme. Yesterday, they traveled to Bassin Bleu and Chansolme, and another team visited Tortue Island. All the areas visited do not require MSF interventions; local health structures are able to meet needs, although there is a lack of medicines in some places and MSF teams have supplied them with drugs. Limited access to health care in many of these areas is an ongoing problem and not a direct consequence of the recent storms and flooding.

In the Bas Artibonite area in central Haiti, a team of three MSF nurses and one logistician has traveled from St. Marc to Dessalines, via Desdunes L’estere and Petite Riviere de l’Artibonite. They have carried out 355 consultations in the region, 309 of which were conducted in one of the most inaccessible areas in the St. Marc district, which the team has had to reach by boat and by foot due to flooding. Assessments have also been performed in, and to the north of, Hinche, where local health structures were found to be meeting basic needs.

In the South of the country, a team traveled from Jacmel to Marigot, where interventions were not warranted.