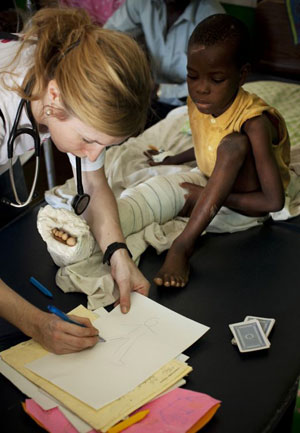 Jerry is seven years old. On January 12, he was seriously injured in the earthquake that devastated his hometown of Port-au-Prince, suffering a severe open fracture to his femur when his house collapsed.

Jerry’s mother, Louismerre, lost two of her five children in the quake. Determined not to see a third child die, she immediately brought Jerry to a Doctors Without Borders/Médecins Sans Frontières (MSF) hospital for emergency medical care.

MSF staff started Jerry on antibiotics to prevent the spread of infection. He was then taken to an operating theater, where an MSF surgeon performed a debridement of the wound, cleaning it out and removing dead tissue. A few days later, the doctors brought Jerry back so they could examine and clean his injury again. They discovered the infection had not abated and they became extremely concerned that it would spread to the rest of his body, putting his life at risk. They were forced to make a difficult choice. “The wound was very near the groin,” said MSF’s Dr. Karin Lind. “If the infection went above it, there would have been very little we could have done to save him. We knew we had to amputate if we wanted to keep him alive.”

In the 20 days following the earthquake, MSF teams treated more than 11,000 patients. During that time, MSF surgeons worked around the clock, carrying out more than 1,300 surgical operations, including 140 amputations. Amputation was always the last resort in the effort to save the life or limb of a patient. In some cases, however, there was no alternative. “We cared for scores of open fractures as a result of this disaster, and we managed to save so many peoples’ limbs,” said Rosa Crestani, MSF’s emergency medical coordinator in Haiti. “But sometimes a doctor has no other choice than to carry out an amputation, either because a limb is in such a bad state that it is impossible to save, or because the wound is so badly infected that keeping the limb means risking the patient’s life.”

An amputation only goes ahead once MSF surgeons receive consent from a patient or their family. Then, before the operation, MSF psychologists help patients come to terms with the loss of the limb and convey to them and their families what this will mean for the future. “They already have to cope with the trauma of the earthquake and the trauma of losing loved ones, so an amputation is yet another layer to their suffering,” said MSF psychologist Renaud Sander. “After the amputation, we try to make sure the family will support the patient. But it is very difficult to tell a mother to be strong for her child after she has lost her husband and everything else she had in the earthquake.”

Once the amputation is finished, physiotherapy begins. Physiotherapy is essential to improve mobility and prepare the patient for a prosthesis—the artificial substitute for the missing limb. “It’s crucial to start early to prepare the patient for an artificial limb,” said Viviane Hasselmann, a physiotherapist from Handicap International who is working with MSF staff at Isaie Jeanty Hospital in Port-au-Prince. “So, with physiotherapy we work to strengthen the muscles in the limb that will receive the prosthesis, and we also work to strengthen their other leg or arm. After three months, the scar should have had enough time to heal, and the skin should be strong enough for the patient to receive the prosthesis.” 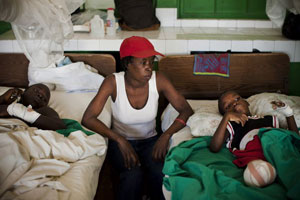 Jerry's mother, Louisemerre, watches over him after his surgery; physiotherapy will prepare him for the possibility of a prosthetic limb.

Physical recovery from major surgery can take a long time and require specialized care. Many of MSF’s patients lost their homes in the earthquake, however, and have no clean shelter in which to recover. Leaving the hospital too soon after surgery would be a major threat to their recuperation. But with hospitals still filled with injured people, there is a shortage of beds for longer-term care in Port-au-Prince.

Responding to the growing need for prolonged assistance, MSF set up four medical structures specifically designed to provide post-operative care. “We need to carefully follow-up [with] patients after surgical operations and at the same time make space in those hospitals where we still provide surgery, as there is an ongoing influx of patients,” says Rosa Crestani, the emergency medical coordinator. “Thus, we are increasing the number of places we can provide this type of long-term care.”

One such place is Mickey, formerly a kindergarten, now a post-operative center. Last week MSF set up a new medical tent in Mickey’s courtyard, doubling the number of beds available for post-operative patients from 30 to 60.

In Mickey, MSF nurses, doctors, psychologists and physiotherapists work together to offer comprehensive service, cleaning and dressing wounds, providing psychological support and helping patients through a routine of exercises. This is where young Jerry is now recovering under the attentive eyes of his mother, Louisemerre. Ideally, close attention and quality care will allow Haitians wounded in the earthquake, like Jerry, to take the first steps back to recovery.