Haiti: Survivors in Flooded Village Stranded with No Help

One month after storms, needs remain huge; people being forced from shelters 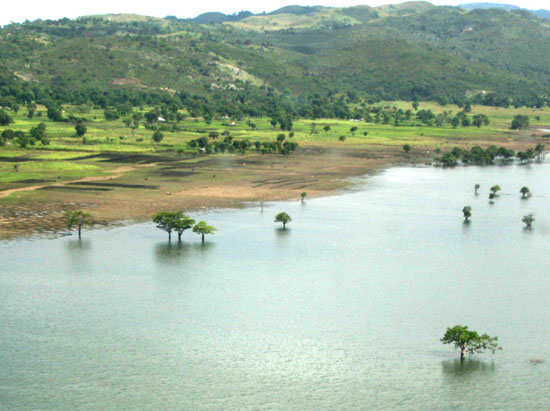 The area of Mamont, in the Artibonite region, remains partially submerged under water.

On Tuesday, September 30, MSF teams managed to reach Mamont, a town southeast of Gonaïves in the Artibonite region, which was heavily affected by the series of storms that struck Haiti in late August and last month. The town, with an original population of roughly 17,000 people, had been totally isolated for the last four weeks. The teams found the village partially submerged with water spilling over from a lake formed by the storm. The remaining population is cut off from all major towns since the road is also submerged. The survivors have been without clean water, sufficient food, or medical care for weeks.

The MSF teams are currently providing assistance to those who remained in Mamont and is calling on other organizations to assist as quickly as possible. Although international attention has largely moved on from the emergency in Haiti, the example of Mamont shows that emergency assistance remains critical for some parts of the country.

In the Gonaïves area, concrete measures for getting the victims of the storms back on their feet are slow to materialize; there remains a lack of access to clean water, problems with sanitation, and a shortage of the most basic goods.

There is the risk of disease spreading and MSF is worried about the repeated expulsions of displaced people from places where they found temporary shelter. For several days the authorities have been pushing for the evacuation of classrooms before the start of the new school term on Monday, October 6. The situation is similar in churches, where congregations want to resume their worship and are pushing those sheltering inside to leave. 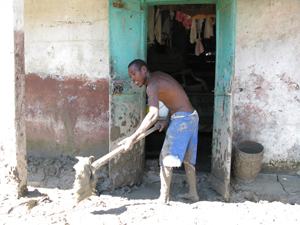 A man shovels mud from a house in Parc Vincent.

The cathedral in Gonaïves, where more then 200 people found refuge, was emptied two weeks ago; some of the displaced moved to a camp of 65 tents in Praville, where conditions are unacceptable. In the area of K-Soleil, more than 800 people were evicted from their shelter and had no option than to camp in their ravaged houses or sleep under a piece of cardboard. People who were asked to leave the Church of the Christian Union, numbering some 500 following the floods, had to relocate to the university, where now over 200 of them remain without even minimal hygiene facilities. And while the Parc Vincent area, heavily affected by the disaster, is gradually being cleaned up, large numbers of families there find themselves with no choice but to sleep in the street after being forced out of shelters.

Today, hundreds of families are left without a place to stay and without any means to rebuild their lives, as neither the authorities nor international organizations present in Gonaïves have provided alternative shelter.

MSF has recently opened an 80-bed hospital in the north of Gonaïves in collaboration with the Health and Population Ministry. This structure is the only one in the region that can respond to emergencies and provide obstetric and pediatric services in this town of 300,000 inhabitants, devastated by the recent hurricanes and tropical storms.

During the first five days, this structure has already received 108 patients in the emergency room and performed 19 deliveries as well as eight minor and one major surgery interventions. In total, 40 people have been hospitalized

In parallel with its activities in the hospital, MSF continues to provide drinking water to the population, but the situation remains precarious in Gonaïves. Every three days, the team chlorinates 1 million liters of water, and, together with other organizations, they truck 350,000 liters daily for distribution to the communities. In total, since September 8, MSF has distributed more than 3.3 million liters of water. This represents the largest percentage of the water that has so far been distributed. MSF aims at having a capacity of 1 million liters of water per day.

Mobile medical teams continue to travel by car around Gonaïves and by helicopter to its environs to provide assistance to the most vulnerable people in temporary shelters or in nearby isolated villages. Since September 12, MSF teams have performed more than 1,150 consultations in mobile clinics.

After performing 2,326 consultations in 20 days, MSF teams left the health center of Rabouteau in Gonaives last week; it is now fully managed by the Health and Population Ministry.

MSF teams have also assessed needs in the northwest of Haiti, in the central Artibonite region, and in the south of the country. While interventions are not currently required in the areas visited, the teams have provided some health structures with drugs and materials and have carried out medical consultations. A nutritional surveillance system has also been established in the northwest region and assessments have been carried out in the northeast and southeast areas of the country in relation to food insecurity.