With conditions finally improving for the practice of surgery and medicine, three MSF staff members describe how the teams treated patients in the ruins of the Delmas district in the immediate aftermath of the January 12 earthquake in Haiti. 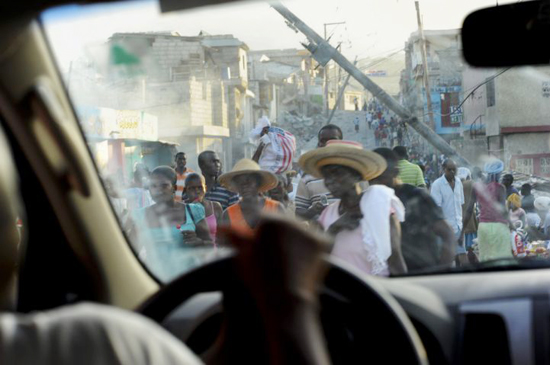 Driving through Port-au-Prince, just days after the earthquake.

As medical assistance moves into a second phase, with conditions finally improving for the practice of surgery and medicine, three MSF staff members describe how the teams treated patients in the ruins of the Delmas district in the immediate aftermath of the January 12 earthquake in Haiti.

The Earth Shakes
It was the end of the day in Haiti, and Pacot, the rehabilitation centre had closed its doors. The pharmacy was locked up for the night. The entire MSF team was still in the office when the building began to shake. “We all had the same reflex: run for it, get out as quickly as possible” recalls Joseph Yogho Andona, logistics coordinator in Port-au-Prince. “It was only once we were outside, in the clouds of dust, that we realized it was an earthquake. It didn’t last more than ten minutes, and we finally grasped what was happening when we saw the district go up in smoke.” He called another team, at Trinité hospital, and gasped: “We’ve had an earthquake.” The reply was short and to the point: “Us too. The hospital’s collapsed. Masses of people are trapped.”

The Wounded Arrived Immediately
Wounded patients started pouring in, and the team pulled out the emergency boxes. The most serious cases were swiftly delivered by car. Joseph left in search of other emergency boxes in the house, and to take stock of the situation at Trinité. He and his colleagues were constantly stopped in the streets: “MSF, help us!” The doctors and nurses delivered first aid and sutured wounds while the logisticians set up areas for work. Some patients were too severely wounded to be saved, given the lack of resources at hand; in such cases, pain relief was all the teams could offer. Around 300 people were “hospitalized” in Pacot in the space of a few hours, and even more at Trinité. The headlights on cars were the only source of light.

For two entire days no one stopped, neither to eat nor sleep. The watchmen controlled the surging crowds while a member of the medical staff picked out the most urgent cases. On January 14, even though no reinforcements had arrived, the surgical team started operating in a theater cobbled together under plastic sheeting. In the meantime, in Bordeaux, a field hospital was loaded on a cargo plane for immediate shipment to Port-au-Prince.

Organizing Triage, Medicine and Surgery
The incoming support teams were stunned by the conditions at Trinité. The patients were everywhere, in front of the hospital ruins, in the streets, lying on boxes or spread out on the floor. Two surgical teams worked in makeshift operating theaters, one under plastic sheeting, the other in a container. A third cleaned the patients’ wounds in another closed off area. Dr. Roberto Beccari, a surgeon, recalls using pallets stacked on top of each other as an operating table. “It was a race against time,” he says. “There were so many open fractures and we had to get a handle on necrotic tissue infections."

A fourth post was set up for triage, identifying serious cases and providing care for dressings and plasters. Off to one side, a doctor was busy suturing. Then there was the monitoring of hospitalized patients. The work took place in the heat and the noise, at times under the light of only headlamps. But at least the sterilization system worked, and the anaesthetists had the medicines they needed in the pharmacy. “I remember one young woman who had suffered very severe head injuries,” recalls Dr. Philippe Touchard, an anaesthetist. “It took three of us to administer the anaesthetic, as her airways for intubation were barely accessible.” Her wounds were in awful shape, he says. “We operated on this 27-year-old woman several times,” and managed to save her life. 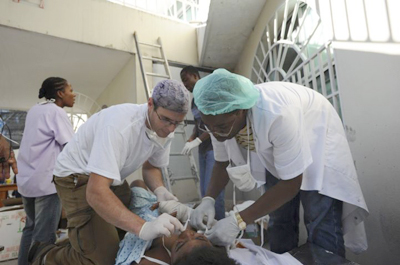 More than 110 procedures were carried out in ten days (without counting the dressings) at the Pacot and Trinité sites, including 27 amputations. Most of the wounded had a crushed limb, or markedly open and infected wounds. The teams tried to avoid amputating if at all possible, but there were cases where it was the only way to save the patient’s life.

A Limb Lost, A Life Saved
Quick assessments were needed to determine what could be saved. “For a crushed limb, if you intervene in the first 24 hours, you can have it working again,” explains Roberto. “If it takes any longer, you can try and save the limb, and hold on to a degree of functionality. Even inert, a limb can be useful, above all upper limbs, when orthotic fittings are far from ideal.”

Hard decisions had to be made. “My first operation was on a hand, which is my speciality,” Roberto recounts. “It was a gaping open wound, really infected, I cleaned it. I couldn’t amputate. It took me two days to resolve to cut off limbs. I ended up, three days after this first operation, amputating this hand. The infection had set in too deep, and was moving too quickly. The patient risked losing an arm or dying. At the start, I couldn’t announce the amputation myself. But it got easier. It’s not because I got used to it, but I accepted that it was at times the only thing to do, the right decision.” The team “still saved many others–legs, arms, hands,” he adds. In the morning, at 7 am, without saying a word, each doctor would check if his patients were still alive, or had “passed on.” That was the term the team used.

Transfer to the Inflatable Hospital
Throughout the week, another team was busy preparing a site for MSF’s future hospital, in Saint-Louis. The supplies finally showed up, six days after the earthquake, with several days of delay due to the refusal of landing permission for the MSF plane in Port-au-Prince. The medical staff organized the circuit and the pharmacy. The logisticians inflated tents and set up beds. Joseph, the logistics coordinator, refused to leave Haiti until the hospital was finally up.

One hundred patients hospitalized in Pacot and another 80 from Trinité were transferred to Saint-Louis. They found themselves installed on beds with mattresses and without what they feared most: a roof. The canvas structure reassured them while ongoing tremors spread repeated waves of panic. The surgeons started operating in conditions conforming to quality standards. So Joseph agreed to take a break, far away from Port-au-Prince. On January 28, for the first time in 16 days, he stopped feeling as if he was trembling.