Today, an MSF international team is resuming its work in Kayna hospital, Lubero district, where security has been poor over the past week. Recent fighting in the area forced hundreds of people to flee and hampered humanitarian efforts. Most of the population of Kanyabayonga, further south, has left the town. MSF is extremely worried about the fate of thousands of people currently hiding in the bush in fear. The team’s top priority is to find them and provide them with urgent assistance. 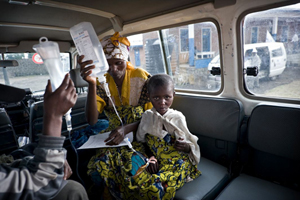 MSF transports patients to the hospital in Goma.

Throughout North Kivu province many of the displaced and local residents continue to be in urgent need of food, clean water, healthcare, and basic items like blankets, hygiene tools, and shelter materials.

MSF teams are continuing to work at a hospital and at health centers in Rutshuru and Kiwanja. In total in October, surgical teams performed 406 surgeries at Rutshuru Hospital. Of these, 110 were for gunshot injuries.

MSF continues to run an ambulance service to refer patients from health centers in Kiwanja, Kinyandoni, and Kibututu, to Rutshuru Hospital. Ninety-two patients were treated for cholera last week in cholera treatment center in Rutshuru, and 23 people were treated for the disease in Rubare.

An MSF international team of three people is currently working in Nyanzale, west of Rutshuru, along with their Congolese colleagues. There are 21 inpatients at the health center there, along with 37 children being treated for malnutrition. An average of 75 consultations are carried out every day.

A team will be returning to Kabizo, further south of Rutshuru. From there they plan to assess the situation in Bambu, where an significant displaced population is said to have sought refuge and where there are reports of suspected cholera.

The risk of the spreading of diseases such as cholera or measles increases as people are continuously displaced. 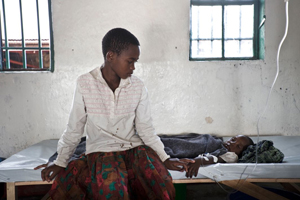 A patient at the cholera treatment center in Kibati.

In Kibati, a camp just north of Goma with an estimated population of 40,000 people, the MSF cholera treatment center has admitted 169 patients since the beginning of this month. At Don Bosco orphanage in Goma, about 1,400 displaced people have sought refuge. Another MSF cholera unit has treated 190 patients over the last three weeks but there has been a decrease in daily admissions. MSF is continuing to truck clean water to Kibati camp.

West of Goma, MSF is working at the hospital in Kirotshe, and supporting health facilities in three locations beyond the frontline, in Mushake, Karuba, and Rubaya. In the past week MSF mobile clinic teams have performed 773 consultations and have referred the most serious patients to Kirotshe Hospital. Over the same period there were 282 outpatient consultations at the hospital and 151 patients were admitted. Over the last week MSF performed 15 emergency surgeries, two for people with violent trauma injuries.

In the displaced persons camp in nearby Shasha, an MSF psychologist has trained a team to help people suffering from psychological difficulties as a result of the conflict. About 500 people are participating in group sessions, and those most affected also receive individual counseling.

In Kitchanga, Mweso, and Masisi, northwest of Goma, MSF is continuing to provide primary and secondary healthcare and is running mobile clinics. Further south in Minova, an MSF team continues to support the local hospital and health centers, and is treating cholera patients.

Further north, MSF is supporting Matanda Hospital in Butembo and is responding to cholera cases in Beni.

In the northern Ituri district, MSF teams are assisting the population following ongoing violence. Around the town of Gety, thousands of displaced people have sought refuge in the surrounding forest. MSF is running mobile clinics in five locations and referring serious patients to hospitals in Gety and Bunia. Twenty-six children with acute malnutrition have been treated over the last ten days in Bunia.

In Dungu, Haut-Uele District, the MSF team is providing healthcare through mobile clinics. This week, they will distribute blankets, jerry cans, mosquito nets, and clothing to about 500 families in Dungu.