Syrians affected by the ongoing conflict need greater humanitarian assistance inside and outside the country. 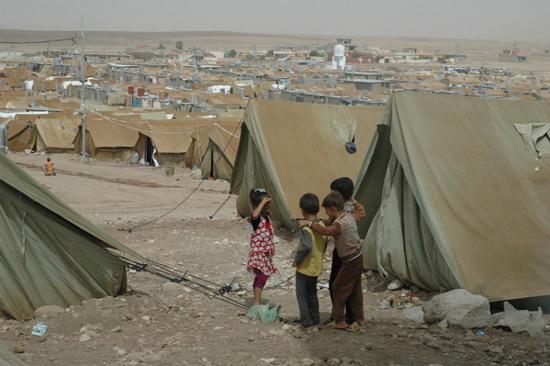 The Domeez refugee camp in Iraq, where MSF has been treating Syrian refugees since this past May.

The humanitarian situation in Syria continues to worsen as the war escalates and attacks against health facilities continue. Access to large parts of the country remains extremely difficult due to insecurity and heavy fighting, and more than two million people have been displaced. The number of Syrians seeking refuge in neighboring countries is increasing, but the humanitarian response in Lebanon and Iraq has so far been unable to meet their needs. The arrival of winter is exacerbating the difficult living conditions of Syrian refugees and the population remaining in the country

Doctors Without Borders/Médecins Sans Frontières (MSF) currently works in three field hospitals in the north of Syria. Since June, 10,000 patients have received medical attention for reasons including violence-related injuries such as gunshot wounds, shrapnel wounds, open fractures, and injuries due to explosions. More than 900 surgical procedures have been carried out. Admissions are irregular, depending on shifting frontlines and whether it is possible to refer the wounded. MSF is also providing training in mass casualty management, triage, and emergency care to Syrian health personnel who need support in the management of war-wounded patients. Specific assistance is also being provided to medical facilities, such as helping set up an emergency room and a blood bank in Aleppo area.

Several other health facilities have been set up by Syrian doctors and other medical organizations to treat the wounded in the northern region. However, general access to health services remains limited for the population, particularly for people suffering from chronic illnesses. A significant number of MSF’s patients need treatment for chronic disease or accidental trauma, or assistance during childbirth. Further support needs to be developed to meet these needs.

People Displaced Inside Syria
Access to large parts of Syria remains extremely difficult and prevents the delivery of large-scale relief to the people who have been displaced within the country. MSF has made ad hoc distributions of relief items and provided water in some camps for the displaced, but most people are not living in camps, and many are constantly on the move.

MSF is seeking to organize the distribution of blankets, wheat flour and medicines to displaced people in the Deir Azzour area. However, thousands of people within the city of Deir Azzour remain unable to access adequate health services, and the constant fighting has made it impossible either for MSF to get into the town or for the sick and wounded to be evacuated.

Refugees in Neighboring Countries
According to official estimates, more than 500,000 Syrian refugees are registered or awaiting registration in neighboring countries, but the actual number could be much higher. Despite better access and security in Lebanon and Iraq, humanitarian assistance to the refugees remains inadequate.

MSF is carrying out medical consultations and distributing relief items to refugees in both countries. Families arriving in Lebanon are taking shelter in any building they can find. The local population has been providing support but their resources are strained as the crisis persists and the number of refugees increases. The registration of refugees is extremely slow and not enough means have been deployed to efficiently track their needs in terms of housing, basic living items and access to health care.

In Domeez refugee camp in Iraq, water and sanitation services are poor. The difficult living conditions for refugees are compounded by the arrival of winter and sub-zero temperatures.

In Jordan, MSF conducts regular visits to the refugee camps to identify patients needing surgical care. Syrian patients are referred or self-referred to the Amman hospital, where they may undergo orthopedic surgery, physiotherapy, psychosocial support, or post-operative follow up. MSF is also providing medical consultations for Syrian refugees in the Amman hospital.