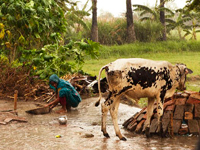 Dr. Marta González works with Doctors Without Borders/Médecins Sans Frontières (MSF) in India's Bihar State, at the kala azar project in the Vaishali district. Since the project opened in 2007, MSF has treated about 8,000 patients at the Sadar Hospital and in five MSF-supported health centers. The initial cure rate of kala azar cases is at 98 per cent.

Here, Dr. González talks about the challenges of diagnosing and treating the disease:

Bihar state in northern India is one of the areas with the highest number of kala azar patients in the world. Could you explain what kala azar is?

Kala azar, also known as visceral leishmaniasis, is a tropical disease that comes from the parasite Leishmania, which is transmitted by the bite of a sand fly. The disease usually affects people who have poor living conditions. Once infected, a fever develops, the liver and spleen grow bigger, the patient loses weight, and their immune system is weakened. Without treatment, this disease leads to death in almost 100 percent of cases.

Since 2007, MSF has been diagnosing and treating kala azar patients in Vaishali district. To start, how do you diagnose kala azar in patients?

Diagnosis of kala azar is based on the clinical symptoms as well as a physical examination and a lab test. Lab tests consist of a rapid test known as rk39, or the microscopic detection of the parasite. Usually, this last one is done with samples that come from either the spleen or the bone marrow.

In most countries, the first-line treatment is a regimen of injectable pentavalent antimonials, but these are not as effective in India. Could you explain why?

Injectable pentavalent antimonials are drugs that were used in the Indian subcontinent in recent decades. However, the parasite has now developed resistance to these drugs so that they are no longer effective for almost 65 per cent of patients in the area. There are also other disadvantages of antimonials, such as the length of the treatment – it takes 30 days of painful injections - and its potential toxicity.

Which are the main advantages of the treatment with liposomal amphotericine B?

Liposomal amphotericin B (LAmB) is a more effective drug for the treatment of visceral leishmaniasis. Other advantages are that treatment is shorter in comparison to other drugs, and can be used on an outpatient basis. LAmB has low toxicity, even when used in high doses.

WHO recommends treating kala azar in India and Bangladesh with liposomal amphotericine B. However, it is not commonly used in India as of yet. Why is that?

The use of liposomal amphotericine B is not yet a reality in India for several reasons. One is the price; compared to other treatments, it is high. Also, LAmB needs a cold chain in place to be able to preserve it, but the infrastructure in many rural areas of India is not yet ready to guarantee this.

Nowadays, there are many ongoing research projects in India trying to find the best treatments for kala azar. The last trends seem to point towards LAmB and combination therapies as the most effective treatments for visceral leishmaniasis. MSF is working together with DNDi (Drugs Neglected Diseases initiative) to develop these treatments and will be implementing them in the Bihar state in the coming months.