India: No End in Sight to Cyclone Aila Misery 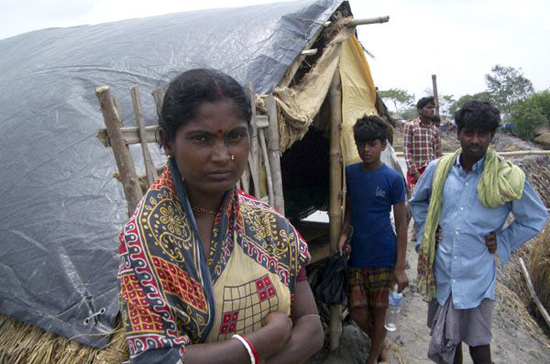 Bangladesh 2009 © Veronique Terrasse/MSF
In the wake of Cyclone Aila, daily flooding in both Bangladesh and India prevents families like this one from rebuilding their homes and communities.

Nearly two months after Cyclone Aila devastated East India and the coast of Bangladesh, the plight of survivors is no longer headline news. However, daily flooding is making their recovery almost impossible. In North 24 Parganas district, one of the worst affected areas in West Bengal,India, Doctors Without Borders/Médecins Sans Frontières (MSF) is providing humanitarian assistance in remote villages.

"Most of the houses collapsed, including ours. We’ve been displaced for a month and a half and there’s no sign of improvement. You can see the roof of our house from here. We can’t return as it’s still under water. We’ve lost our goats and cooking utensils, clothes, grain and most of our belongings were washed away."

Usha Mondal, 23, points to her former home sunk deep in the floodwaters. It’s just a few meters from the embankment where she now lives with her husband and her five-year-old son in a temporary hut made of flimsy bamboo and whatever else they could find. The roof of her former house emerges from the murky water like the tip of an iceberg. It’s all Mondal has left since Cyclone Aila struck.

Huge needs in remote areas
“How long can we last like this?” Mondal asks. “We’ve been living in this mud with very little aid for over a month now. We received food from the government, but nothing for the last 10 days. We used to be farmers, but all the paddy fields are still under water and we can’t work now, so we’ve begun fishing. But this doesn’t provide us with enough food for the whole family.”

Joining her neighbors, Mondal lines up, ticket in hand, to receive blankets, water purification tablets, soap, and plastic sheeting provided by MSF, which is working to meet the needs of 15,000 people in the worst affected areas of East India. MSF health educators are showing the villagers how to use plastic sheeting to collect rainwater and how to store and purify it.

“We focus on areas where the needs are the greatest and where access is difficult and requires a boat,” explains MSF project coordinator, Rivkah van Barneveld. “Although the immediate cyclone response has been adequate, in some places people need more and we’ve seen situations where several families have had to live under one plastic sheet.”

"My daughter’s house is made of bricks and is situated on the embankment on higher ground. I’m staying there with five other families from the neighborhood. There are four rooms with five people in each room."

”Surviving each day is a struggle”
Unable to resume normal life, villagers are forced to stay in crowded temporary shelters. Poor hygiene conditions and the lack of clean drinking water pose high risks of disease outbreaks. With the monsoon season approaching, conditions could deteriorate further.

MSF has set up a surveillance system to monitor and control potential disease outbreaks. Health workers and medical staff are scouring villages for cases of malaria, diarrhea, measles, or cholera and meeting regularly with the nurses at the local health centers.

The long-term impact of the disaster is likely to be devastating. “Surviving each day is a struggle that takes all our strength,” says Mondal. “We haven’t had time to make any other plans. This is my village and I don’t want to leave, but we can’t hold on like this for ever. I have two children to feed. If things don’t get better soon, we will have to go to Kolkata in the hope of finding work there.”

MSF is distributing relief items, providing basic healthcare and checking and repairing water sources— assisting around 75,000 people in Bangladesh and 15,000 people in India who are affected by the aftermath of the cyclone.