Trapped by rubble, “I tried hard to protect my pregnant belly”

“I was taking a bath when the tsunami hit,” recalls Elis, a 30-year-old mother of one and seven months pregnant. She was trying to escape the day’s humidity at her home along the seashore in Indonesia’s Labuan sub-district.

When the first wave hit, Elis’s husband, Purwanto, cried out: “Tsunami! Tsunami!” He rushed to their daughter and Elis’s parents, who lived next door, so they could seek safety. “When my husband shouted, I put on my clothes as fast as I could,” Elis said. “When he came back inside the house to help me, the second—and bigger—wave hit.”

This powerful wave, estimated to be 20 to 40 feet high, instantly destroyed the house. Purwanto, 35 years old, was injured when the building’s tin roof hit his left thigh. Elis was trapped by the rubble. “I tried hard to protect my pregnant belly so that it would not be hit by anything,” she said. “I could not see my daughter. I could not see my mom and dad. What I heard was my husband’s voice calling me.”

Fortunately, despite his injury, Purwanto was able to free Elis from the wreckage of their home. But they could not find their daughter or Elis’s elderly parents. They had no choice but to leave their ruined house and head to Labuan’s health center, not knowing if their loved ones were alive or dead.

The couple walked about a mile towards the health center. Along the way, they met a man on a motorbike who offered them a ride. When they arrived they saw many other people who had been injured in the tsunami. As they waited for treatment they desperately sought information about their family. “That night, we finally got word that our daughter was safe and [that] she was with my sister,” Elis said. The following day, the couple were reunited with Elis’s mother and father, who were also injured quite badly when the wave swept through the village. “Thank God, our family members were safe despite their injuries,” Elis said.

Elis and her husband were treated by the Doctors Without Borders/Médecins Sans Frontières (MSF) team at the Labuan health center. “They checked my condition and that of the baby,” said Elis. “I had bruises with some swelling almost all over my body. But thank God, my baby is okay.” She stayed at the health center for the next three days. Meanwhile, the MSF team referred Purwanto and Elis’s parents to the hospital in Pandeglang, as their injuries were quite severe.

MSF teams were able to respond quickly when the tsunami hit because we have been working in Pandeglang District since February 2018, collaborating with the Indonesian Ministry of Health on an adolescent health project. Hours after the wave hit, MSF’s emergency medical team visited and immediately began supporting the health centers in Labuan and Carita, two of the worst-affected areas.

In the days since, MSF has also been operating a mobile clinic to reach evacuation centers and host communities in the area where people displaced by the tsunami have sheltered. Because most displaced people were not able to access medical services in the wake of the disaster, their injuries remained untreated. On the eighth day of MSF’s response, the team visited Elis and her family at the home of her older sister, where they are temporarily staying now that Elis and her husband and parents have been discharged.

The team checked their injuries, redressed their wounds, and replaced their bandages. It will take time for the family to recover from the disaster, but Elis is still hopeful. “We really want to have a new place soon,” she said. “I know it is stressful now, but I don’t want my trauma to affect my baby. I am okay now.”

The tsunami affected five districts in Indonesia’s Banten and Lampung provinces in Indonesia. Among these, Pandeglang District was most affected. The Meteorology, Climatology, and Geophysics Agency confirmed that the tsunami was caused by the eruption of the Anak Krakatau volcano, which triggered an underwater landslide.

As of December 28, 2018, Indonesia’s national disaster management agency reported that 40,386 people have been displaced by the tsunami. More than 80 percent of those displaced are from Pandeglang. The death toll has risen to 426, and 7,202 people were injured. 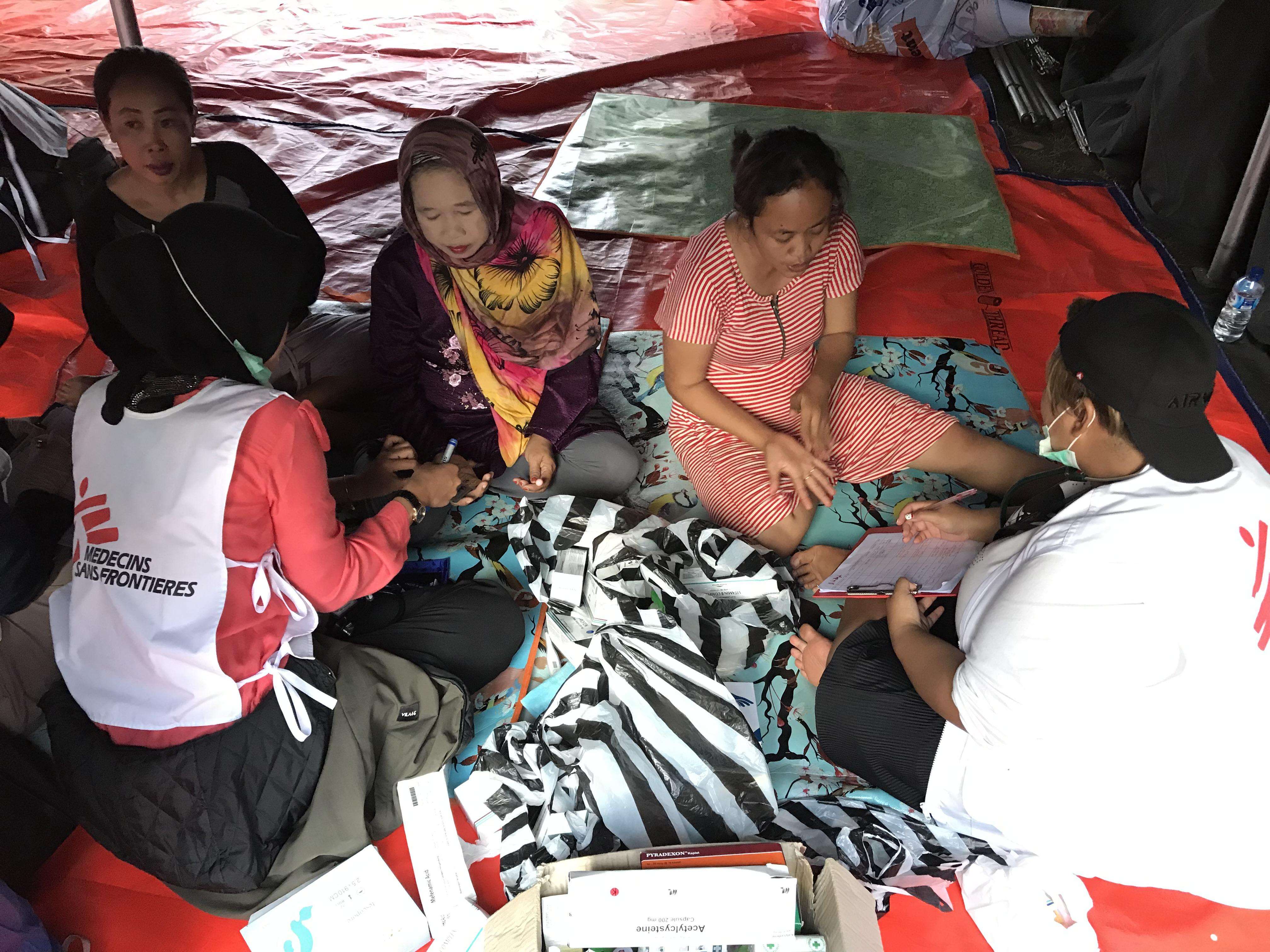 Indonesia: Caring for victims of the Sunda Strait tsunami