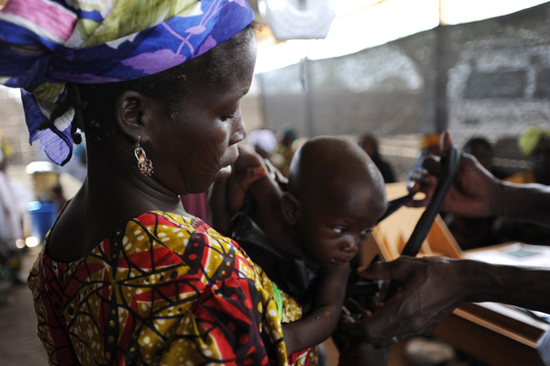 A child is weighed at the MSF integrated health center in Dakoro District, Maradi region. 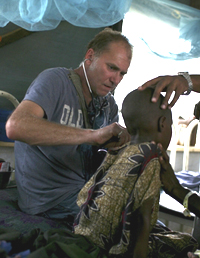 A complex series of nutritional crises is unfolding across the nations of Africa's Sahel region. Doctors Without Borders/Médecins Sans Frontières (MSF) director of operations Dr. Jean-Clément Cabrol has just returned from southern Niger. In this interview, he describes what he found and why a new approach is needed to treat the children who bear the brunt of the region’s chronic food insecurity.

Is there a food crisis in Niger?

If you’re asking if the situation is exceptional, then the answer is no. In Niger, food access problems that trigger widespread malnutrition are unfortunately recurrent. In 2011, which was not even considered a crisis year, more than 300,000 severely malnourished children were treated throughout Niger, and not only by MSF. This year, that figure could reach 390,000.

In 2012, the chronic food insecurity has been exacerbated by additional factors: rising prices of commodities; the return of large numbers of workers who had previously been sending money home from Libya; an increase in malaria cases brought on by the early arrival of rains; and the influx of refugees from Mali, which has put pressure on an already-suffering population. [note: In 2011, MSF released the results of epidemiological studies conducted in Niger in prior years that showed that preventative supplementary feeding programs reduced nutrition-linked mortality by up to 50 percent.]

What should the response be?

Thanks to new, ready-to-use therapeutic food products developed in the early 2000s, malnourished children without complications no longer need to be admitted to hospitals. They can be treated at home by their mothers. This has allowed for a significant increase in the number of children treated for malnutrition—it would be impossible for the health system in Niger to cope with admitting 390,000 children to hospitals.

MSF has called unceasingly on major UN agencies like UNICEF and the World Food Program (WFP) to use foods such as peanut paste fortified with milk protein, vitamins, and minerals, which are formulated specially for children and contain all the nutrients necessary for their growth.

More recently, we have started doing "preventive" food distributions for children under the age of five, with the aim of providing them with an additional source of food to protect them against malnutrition.

We have also decentralized our approach to treating malnutrition. In the villages, agents trained by MSF can now monitor malnourished children and, where necessary, provide them with ready-to-use therapeutic food. This means that treating patients costs less, and it takes the pressure off overcrowded hospitals and clinics. If the condition of a child being treated in the community worsens, or they have medical complications, then they are referred to the closest intensive treatment center for medical care.

How do you see malnutrition being managed in the future?

I believe we should go beyond a purely nutritional approach, except in emergency situations. This means taking action against all the main causes of infant mortality—malaria, diarrhea, and respiratory infections—because children who are sick are at far greater risk of becoming malnourished. So, community agents will will also test for and treat cases of uncomplicated malaria, rather than focusing solely on malnutrition.

The health of mothers and children as a whole must be better integrated into our medical and preventive strategies. For example, when a mother comes for a prenatal appointment, we should systematically take the opportunity to vaccinate her children and test them for malnutrition. Today, we at MSF believe that treating malnutrition and other conditions in isolation is an outdated approach.

MSF and its partners—the Nigerien medical NGOs Forum Santé Niger (FORSANI) and Bien-Être de la Femme et de l’Enfant au Niger (BEFEN) and the international NGO ALIMA—work closely with the Nigerien Federal Ministry of Health in the areas of infant malnutrition, pediatric care, and maternal heath in many health centers and hospitals throughout Niger. MSF also provides health care to the Malian refugee populations in the country. Since the start of 2012, MSF has treated more than 38,000 malnourished children in Niger.