MSF provided medical immediate assistance to the surviving men and woman who were all suffering from serious health problems as a result of the journey to Italy. 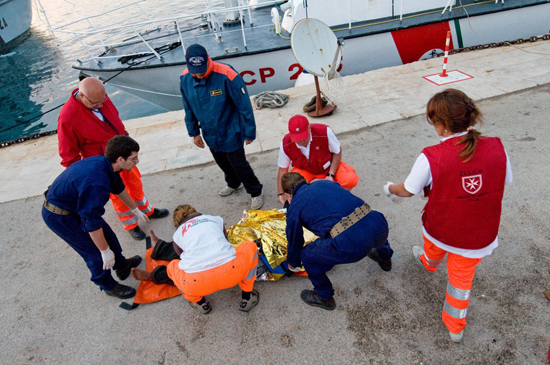 MSF's medical triage in Lampedusa has received far less boat survivors this year, which could be a result of Italy's controversial policy of returning intercepted migrants to Libya without offering medical care or allowing them to apply for asylum.

Seventy-three undocumented migrants are feared dead at sea after a boat carrying five survivors arrived last week in Lampedusa, a small Italian island 125 miles south of the coast of Sicily. Doctors Without Borders/Médecins Sans Frontières (MSF) provided medical immediate assistance to the surviving men and woman who were all suffering from serious health problems as a result of the journey to Italy.

"Their blood pressure was low and their muscles were so weak that they could barely move."

“They were in a state of emotional shock,” said Licia Pera, an MSF nurse who attended to the migrants after they landed. “They were unable to walk due to strong musculoskeletal pain. Their blood pressure was low and their muscles were so weak that they could barely move. They also had burns on parts of their bodies and severe stomach pains. They were in desperate need of medical care.”

The boat left Libya at the end of July but after a few days it lost its course and soon ran out of fuel, food and water. The migrants remained adrift for many days before they were finally rescued and brought to Lampedusa, where MSF has a medical team. According to the five survivors, all the other migrants died on the journey. The survivors also told MSF that two pregnant women delivered still born babies on the boat before losing their own lives.

Last year, an estimated 30,000 migrants and asylum seekers landed on Lampedusa. By October, when MSF was forced to leave the island, the team had treated nearly 1,500 migrants. This year, in contrast, the numbers have been remarkably low. Since MSF returned to Lampedusa in April 2009, fewer than 150 migrants have passed through the initial medical triage provided by MSF. The scarce number of landings this year is worrying and MSF is concerned about what is happening to the migrants who do not arrive in Italy. The recent episode in Lampedusa shows just how hazardous these journeys can be.

Another concern is the approach announced by the Italian government whereby boats with migrants are returned to Libya without being allowed to land, receive medical care or request for asylum. MSF patients in Lampedusa and in Malta report that in Libya they are subject to extremely harsh living conditions and inhuman treatment.

MSF has been providing emergency medical care to undocumented migrants and asylum seekers in Lampedusa since 2002. In October 2008, MSF was forced to leave the island after Italian authorities refused renew the Memorandum of Understanding. MSF returned to Lampedusa in April 2009.