Permanence of sexual violence and impact of military operations 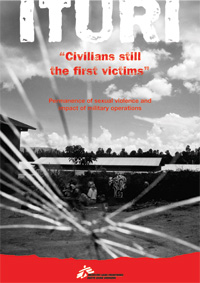 In the wake of a violent civil war, the district of Ituri in the northeast of the Democratic Republic of Congo (DRC), which has a population of 4.6 million, has and continues to be the scene of immense human suffering.

Since 2003, the Médecins Sans Frontières (MSF) medical teams at Bon Marché Hospital in Bunia have borne witness to the situation facing the region’s inhabitants and the violence committed against them. By speaking out on several occasions1 and conducting a number of surveys2 to assess the nature and impact of this violence on the day-to-day life of the population, Médecins Sans Frontières has unceasingly alerted the international community to the situation facing people in the region and the difficulties in providing them with humanitarian assistance.

Following the joint deployment of the Congolese army and the MONUC within the peace process, in 2006, the quelling of the conflict brought a marked reduction in the number of wounded admitted to Bon Marché Hospital. Fortunately, in 2007, only a limited number of wounded have required surgical treatment.

However, every day, the MSF teams continue to treat a very high number of victims of sexual assaults committed by both armed people and civilians. Moreover, although the forms of violence described come in various guises, women and children are the main victims.

Other MSF teams have provided emergency medical assistance to populations recently displaced by occasional military operations, such as in Djugu Territory in 2007 or Gety in 2006. In the course of their work, they have witnessed the consequences for civilians of violent episodes linked to fresh outbreaks of fighting.

Given the scale of the phenomenon, MSF considers it necessary to, once again, draw the attention of the various national and international stakeholders involved in resolving the conflict and managing aid in Ituri to the information provided by the victims of violence treated at its facilities.

We think that it is essential to provide a summary of the forms of violence recounted by our patients, and to share this information with the various stakeholders in Ituri and, more broadly, throughout Congo.

This report does not aim to provide an exhaustive analysis of the humanitarian situation or state of health of the population of Ituri, and is related to the period from 2003 to 2007, with a particular focus on the last two years.

It deliberately centres upon violence of a sexual nature and the consequences of recent military operations, which our medical teams have observed directly during this period. Although these are two distinct issues, they share the fact that they both cause human suffering that prompts the victims to seek help.

The main findings are as follows:

The current example of Kivu, where renewed fighting is having dramatic humanitarian consequences for civilians caught in the crossfire, demonstrates the fragility of the peace process in the regions of Eastern DR Congo and the chronic instability that prevails there.