Ivory Coast: Alarming Numbers Of Wounded In The West

Many wounded people suffering from gunshot or machete wounds have arrived in hospitals in the western towns of Danané, Man, and Bangolo. 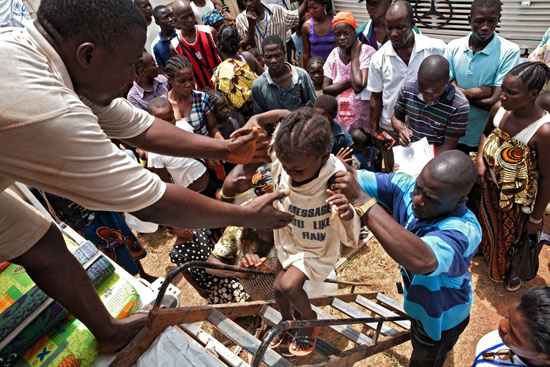 Some of the hundreds of thousands of Ivorians who've fled violence in their homeland help a girl up a ladder at a transit camp in Liberia's Nimba county.

Though major fighting between armed groups may have come to a close in the western Ivory Coast, the situation nonetheless remains extremely tense and extremely dangerous, as sporadic and fierce violence continues to plague several cities in the region. Many wounded people suffering from gunshot or machete wounds have arrived in hospitals in the western towns of Danané, Man, and Bangolo. Doctors Without Borders/Médecins Sans Frontières (MSF) surgical teams in Bangolo are supporting the hospital there.

On April 1, 20 injured people requiring surgery were transported to the hospital in Bangolo; ten people were still waiting to be operated on today.

Access to care is threatened because the ongoing tensions and violence in the area have forced thousands of people to flee from several localities in the west. Many have fled from the town of Blolequin to Zouian-Hounien.

Meanwhile, more than 15,000 displaced persons continued to take shelter within the Catholic mission in the western town of Duekoue. "These people are terrorized, and they lack everything, including food,” said Fricke. “They fear for their lives if they leave the confines of the mission to search of food.”

MSF medical teams working in the mission’s compound have treated 240 wounded people since March 29. Of those, 14 people have been referred to Bangolo Hospital for surgery.

Together with the International Committee of the Red Cross, MSF is the only international organization in western Ivory Coast providing care to wounded people, addressing other medical emergencies, and attempting to bring medical care to others affected by violence and displacement.

The MSF team at Bangolo Hospital has treated 121 wounded people since March 28. An additional 45 people have received emergency treatment at the hospital in the town of Man, and 29 have been tended to at the hospital in Danané, where MSF has donated medical equipment and drugs to help health staff respond to mass casualties. MSF teams working in mobile clinics and fixed health centers in the west treat more than 500 patients per day.

In Abidjan, people are having enormous difficulties accessing medical treatment amidst ongoing fighting in the city. The MSF team in the Abobo neighborhood continues to treat people that manage to reach the hospital there. Thirty-seven wounded people were treated on April 1, including 30 with gunshot wounds.

Fifteen wounded people arrived today at the MSF-supported hospital in the capital, Yamoussoukro.

Medical facilities across Ivory Coast can no longer provide medications, and they lack basic medical equipment. MSF teams donate supplies when security conditions allow. The needs are immense and there is great concern for people who cannot receive treatment.