MSF is deeply concerned for the lives and health of civilians where violence continues to rage, and whose fear is keeping many of them from seeking critical medical care. 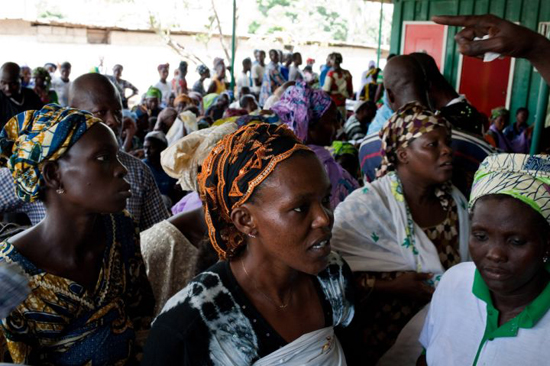 Crowds of people in need of medical care have been lining up outside of Abobo Sud Hospital in Abidjan as early as 4 a.m.

The medical and humanitarian emergency in Ivory Coast persists as violence rages in several neighborhoods in the city of Abidjan, and security in the west of the country remains critically unstable, with populations hiding in fear in the bush without access to food, water, or medical care. Doctors Without Borders/Médecins Sans Frontières (MSF) is deeply concerned for the lives and health of these civilians, whose fear is keeping many of them from seeking critical medical care.

In the West, post-election violence has intensified intercommunal tension and land rivalries, and today the population continues to live in terror of militias and reprisal attacks, particularly in the forested bush areas near the Liberian border.

"Looted and destroyed villages remain deserted, with several burnt bodies still lying along the roads between Guiglo and Toulepleu," said Xavier Simon, MSF head of mission in Ivory Coast. "MSF teams in the area are now treating wounds inflicted two to three weeks ago for people who did not dare come out of hiding to seek medical care until now. These people are still terrified, so they wait until their condition is critical to seek medical care. The displaced people are too afraid to return to their homes in case the violence is not yet over."

On the other side of the border, MSF teams in Liberia are treating newly arrived refugees, including children, with wounds inflicted two to three weeks ago. They tell MSF staff of traumatic violence they experienced in the bush during brutal attacks in Ivory Coast as recent as 11 days ago. These events involve intimidation, kidnapping, rape, and burning people alive. Even when they reach the Liberian side, safety is not guaranteed for these refugees, with incidences of militias crossing the border from Ivory Coast at night, threatening, beating, and demanding food.

"We don’t know how many people are still hiding in fear in the Ivorian bush, or what levels of violence they may be currently exposed to, but the horrific stories we have heard from people are cause for alarm," Simon said. "We increased our mobile clinics up to 12 to reach the most vulnerable, but it still remains too insecure to access the deepest bush to assess needs. It is imperative that civilians are not deliberately targeted in any violence, and that they are able to safely seek lifesaving medical care and humanitarian assistance."

Conditions for displaced people in Ivory Coast are also increasingly cause for concern, with many living outside without shelter in the rainy season, or in overcrowded, unhygienic conditions in camps.  The risk of outbreaks of measles, meningitis, and watery diarrhea are increasing; isolated cases have already appeared.

Meanwhile, in Abidjan, though much of the city has begun to return to normal, violence and looting continue in several neighborhoods, with heavy fighting raging in the densely populated neighborhoods of Yopougon Athié and PK18. In the last four days, MSF has treated 32 wounded people in the general hospital in Yopougon Athié. On April 20, 14 of the 20 patients treated there for violent trauma had bullet wounds. Staff at MSF-supported Abobo Sud Hospital, also in Abidjan, treated 60 wounded patients on April 20. Twelve of them had gunshot wounds.

Across the city, critical shortages of medical supplies and drugs are affecting the ability of health facilities to deliver essential treatment. This week, hundreds of people have lined up at 4 a.m. in the morning outside Abobo Sud and Anyama hospitals, desperate to access medical care.

MSF is an impartial medical humanitarian organization and observes strict neutrality in its operations to provide emergency care. Its activities in Ivory Coast are funded exclusively by private donors, ensuring the organization’s complete independence.