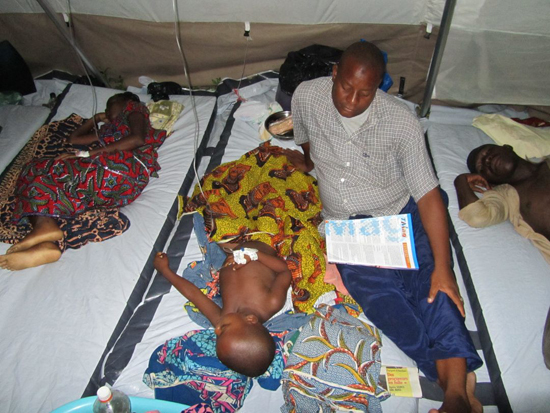 Patients at the Abobo Sud hospital in Abidjan.

The Abobo Sud hospital in Abidjan has been transformed. This facility, which resembled a 20-bed clinic in the months before election-linked violence overwhelmed Abidjan, now has a capacity of 130 beds and is crowded with patients. The MSF team has used every last bit of space to create additional areas for treatment. Entryways have been turned into hospital rooms, and two tents have been set up in the middle of the courtyard.

The staff has been working non-stop since February 28, when an international Doctors Without Borders/Médecins San Frontières (MSF) team and eight Ivoirian volunteers reopened the hospital. Now the fighting in the surrounding area has abated, and the number of Ivoirian volunteers has grown to 250.

In the obstetrics department, an average of 40 women give birth each day. The operating room is also humming. The violence, which began when incumbent President Laurent Gbagbo refused to accept defeat in elections earlier this spring, began to subside in mid-April. Prior to that, however, the hospital was receiving and treating more than 100 patients with bullet wounds every day. Calm has returned to almost all of Abidjan's neighborhoods, but there are still groups of armed men circulating in the city, and around 10 wounded patients continue to arrive at the hospital daily. One morning, a little girl was brought in, barely two years old. She'd been playing in front of her house and was struck in the throat by a stray bullet. Another grazed her head. There are many more typical surgical emergencies, such as caesarians and peritonitis, as well.

Medicine and medical supplies are no longer in short supply. MSF can now arrange for all necessary items to be delivered to Abidjan. Transporting supplies was very difficult in late March and early April. The hospital was on the front line. Employees could not leave and supply routes were blocked. Inventories fell to dangerous levels. Instead of throwing away gloves after each procedure, the staff washed them with soap and chlorine so that they could be reused. But health care workers didn't give up. They slept in the hospital and ate there, too—thanks to a young woman named Patricia who arrived on February 28 to help out, risking her safety by going to the market and preparing meals for everyone.

"The team was very motivated," explains Dr. Chizubo Okanta, MSF medical coordinator. "Doctors were cleaning the beds. Nurses were carrying stretchers." The stress never let up. Bullets whistled nearby, and tanks rolled back and forth outside hospital walls. Hospital workers had to instruct fighters to leave their weapons at the door when they delivered wounded patients.

While the pressure has eased, the team has little time to relax. After remaining hidden at home for days and, even, weeks, people wounded during the violence are coming for treatment. The line outside the hospital begins forming at 5 in the morning. The door opens for medical visits at 7:30. The MSF doctors see between 350 and 400 patients every day. Patients include pregnant women and mothers with children suffering from severe malaria, sometimes complicated by anemia. Some reach the hospital too late and die when they arrive.

To help ease the flow, MSF has reopened hospitals in the Anyama and Abobo Nord neighborhoods and is providing support to a health center in the district. The situation is no different at those sites: many people who went without treatment during the worst of the violence are still in urgent need of assistance.