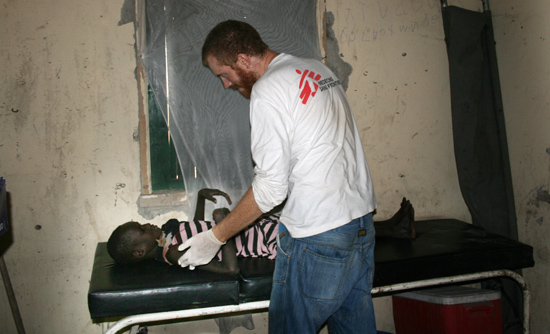 Like his mother and elder sister, two-year-old Pal suffered from kala azar, also known as leishmaniasis, a very serious disease, before receiving treatment from us in Pagil, Southern Sudan. “Pal can go home today,” I said to his mother, who was beaming with joy. But this type of treatment didn’t become available overnight:

I’ve been working as a nurse for Doctors Without Borders/Médecins Sans Frontières (MSF) in Southern Sudan since the beginning of the year. The security situation in the region remains precarious and the people there suffer from malnutrition, which has grown worse over the course of the year as a result of a late harvest.

Kala azar, a tropical disease transmitted by sand flies, is a common occurrence here. The main symptoms include fever, an enlarged spleen, loss of appetite, weight loss and anaemia. Without treatment, a majority of patients die.

Because kala azar is one of the diseases that mainly occur under the radar in poorer countries where patients largely can’t afford to pay for medicine, there are very few therapies available to us. The pharmaceutical industry doesn’t invest in treatment as there’s no profit to be had. We treat almost all our patients with a combination of drugs that are injected intramuscularly for more than 17 days and cause a great deal of pain. We also administer the drugs intravenously to pregnant women and those in the advanced stages of the disease.

In mid-August, I joined a team and left for Pagil, a small village in northern Jonglei, where kala azar is a particular problem. The closest health clinics that provide kala azar treatment are about three days’ walk from Pagil and they are run by other organizations. The rainy season has made the region inaccessible to vehicles, but at least there’s a makeshift runway here. We chose to set up camp in Pagil, as the other treatment facilities in the region had reported an alarmingly high number of new kala azar infections. And that’s why we’re here—to deal with challenges like this.

Over the last eight months in Sudan, I’ve been able to gain a great deal of experience in treating kala azar and managing projects. I also had the opportunity to provide some assistance for five days in March during an emergency situation. But getting a project up and running—which is what I’m here to do—is something completely new for me.

To start with, we move into the small, local health clinic, in which medical staff employed by the Ministry of Health treat the most common diseases. It also happens to be the only permanent structure in the area. We hope the next airplane to arrive will be delivering some large tents so that we will be able to deal with the high number of patients we are expecting. We hire two translators, as there are no medical personnel here whatsoever and we have to provide the treatment ourselves.

Before clinically examining the patients, we have a conversation with them and record their medical history. If we suspect kala azar, we carry out a quick kala azar test and also test them for malaria. If the test comes out positive, we begin treatment immediately. The quick tests prove to be a boon, as they enable reliable on-site diagnosis without the need for a lab or technician.

The rain is quite a challenge, as we sleep in dome tents and live out in the open. Our plan to dig latrines and build showers and fences has been delayed for quite some time as the ground has been too wet. The tents aren’t really waterproof, so we have to put our mattresses out in the sun to dry about once a week.

On the seventeenth day of running the clinic, the number of patients reaches 104, three of which we are able to release with a clean bill of health. We eventually expand the team by taking on people from Pagil and, thanks to the talented pilots who manage to land and take off on a muddy runway, the first medical tent finally arrives.

Now that we’ve successfully treated 80 patients in the five weeks since the project launch, my time here is over and I’m returning to Lankien. But first, I’m going to send Pal William home. Today he’s going to receive his last set of painful shots. We were able to release his sister a week ago and now it’s just their mother who has to finish her treatment.

After all the hardships and struggle, it’s really nice to see some positive results. The project is running amazingly well: we’ve been able to help lots of people; the Southern Sudanese employees that we hired are now well trained and motivated; and the camp is full for the time being. My job here is done and soon someone will be coming to relieve me.