View more
In response to the violence that has hit Nairobi in the last few days, Doctors Without Borders/Médecins Sans Frontières (MSF) has provided care to wounded people in health centers as well as in referral hospitals. Filipe Ribeiro and Rémi Carrier respectively run MSF's activities in Mathare and Kibera. They speak about the last few days of violence in Nairobi.

In response to the violence that has hit Nairobi in the last few days, Doctors Without Borders/Médecins Sans Frontières (MSF) has provided care to wounded people in health centers located in Mathare and Kibera slums as well as in referral hospitals. Filipe Ribeiro and Rémi Carrier respectively run MSF’s activities in Mathare and Kibera. They speak about the last few days of violence in Nairobi.

What is the situation in the slums where MSF teams are working? 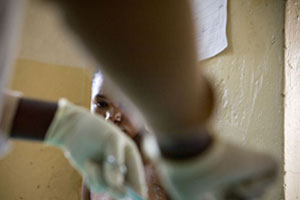 Filipe Ribeiro: In Mathare, between Wednesday and Monday, 73 wounded were treated in MSF health centers. 35 of them had to be referred to different hospitals because of the severity of their wounds. Since Friday, our teams have seen patients arriving early in the morning, right as the health centers open, with more serious wounds than previous days. Most of them have been attacked at dawn on their way to work or early in the evening. Even though our ambulance could move around easily on Wednesday and Thursday in the different neighborhoods, the situation got tenser since Friday and moving around has become trickier but still possible. Sunday was even more violent. Of the 21 people treated in our health centers, 10 had to be evacuated to the hospital. The others have been treated in the health center but required significant stitching.

Rémi Carrier: Last week, during the three days of demonstration, our teams went to pick up the wounded, brought them back to two health centers in Kibera and referred them, if needed, to hospitals. In Masaba hospital, which we support to take care of the wounded, people were lying on the floor all over the waiting room, trucks were bringing more people: some wounded, others already dead. We have also sent counselors, who normally work on our HIV program, to provide psychological support to victims and their families. In total, our team treated 18 patients, including 15 with bullet wounds. Today, the situation is calmer in Kibera, but the atmosphere is still very tense. People fear a new wave of violence.

How would you describe the violence you have witnessed?

Filipe Ribeiro: In Mathare, violence increased after Friday. Until then, most of the wounded we had seen were victims of police violence. But the situation got much worse. In the last three days, people have been victims of armed civilians increasingly organized in groups that perpetrate indiscriminate violence—with knives, machetes, and sometimes axes—against the population as a whole. Our teams have witnessed severely wounded people, with lacerated bodies and mutilated limbs or heads.

Rémi Carrier: In Kibera we have seen severe violence between the police and demonstrators as well as between the different communities. It is striking to see that violence is hitting men, women, and children equally. Our medical staff has been facing a disconcerting situation.

How is it possible to work in such a violent context? 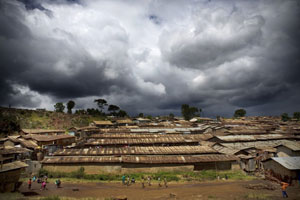 A view from one of the MSF clinics near the Kibera slum in Nairobi. Kenya, 2007 © Brendan Bannon

Filipe Ribeiro: We are fortunate to be very well accepted among the Mathare population. People know us thanks to our HIV/Aids program, which has been running for some years. Also, since the start of the violence, our teams have been doing a lot of extra work to inform the population. We have met different health actors, religious leaders and many local organizations working in Mathare. Two emergency phone numbers have been spread among the population. Due to the tension it is difficult for people to move and bring the wounded to the health centers. Our ambulance, the only one able to move around in the slum, picks up and evacuates the wounded. On several occasions, our teams have been called up by the population and could reach the place of violence quickly.

Rémi Carrier: Our presence in Kibera slum since 1997 through our HIV/AIDS and primary health care program allowed us to build very strong community networks. MSF teams are very close to the population, and many of our staff are actually from the slum. This privileged link allowed us to work in two of the three health centers even when violence was raging. However, because of inter-communitarian tensions, it is not easy for our Kenyan staff to work. Through our networks, we need to reaffirm MSF’s identity, our neutrality, and impartiality. It is of the utmost importance that health structures and their staff are respected. Access to health care and to humanitarian aid, especially in this period of tension, is vital and needs to be respected.

MSF also works in Western Kenya, where our emergency teams strive to respond to the needs of thousands of displaced people and local populations affected by violence in the regions of Eldoret, Kisumu and Kitale.