Kuchlak, Pakistan: Where Childbirth is a Deadly Part of Life 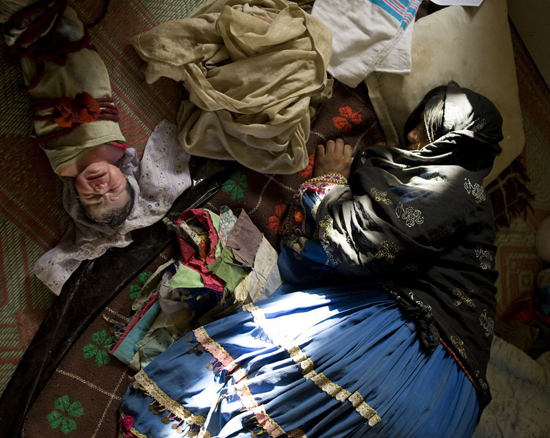 A newborn and mother rest at MSF's maternal health center in Balochistan Province.

Kuchlak is a city of 120,000 people located a 30-minutes drive from Quetta, the capital of Balochistan Province. Situated on the border with Afghanistan, the town has become a permanent home to Afghan refugees who fled to Pakistan during the civil war in the 1980s and later conflicts. In this remote area where health services are almost unreachable, Doctors Without Borders/Medecins Sans Frontieres (MSF) has been providing medical care in a maternal health and a rural health center since 2006.

On a dusty gravel road to the Afghanistan border in between the horn blasts from passing trucks, the faint cries of newborn babies can be heard from inside the MSF birthing unit in the town of Kuchlak—located in Pakistan’s southwestern Balochistan Province.

Inside a neat and newly painted room a young mother in her twenties has just given birth. It is her third child. She lies, spent at the effort, while midwives attend to the newborn. It is a boy and she is happy that she has born her laborer husband a son who will grow up to look after the family.

To outsiders there should be nothing extraordinary about her delivery. But this young mother has just survived an event that claims the lives of thousands of women living in rural Balochistan, the largest and least developed Pakistani province. Here childbirth is a deadly part of life—claiming women’s lives because they cannot access proper maternal healthcare in time.

Infant mortality figures are estimated to be around of 65 deaths per 1,000 live births. In 2007, the maternal mortality rate in Balochistan stood at an equally alarming 637 deaths per 100,000 live births. That is more than double the national average for Pakistan, which was the eighth highest number of maternal deaths worldwide in 2005. Couple this with the low number of nurses and midwives in the country and the dangers of childbirth in Pakistan become clear.

MSF has been operating a maternal and child health center in Kuchlak since 2006. The services provided by the center include antenatal consultations, obstetrics, gynecology, post-natal care, vaccinations, and general free health consultations for children under five. Every week about 1,000 patients seek treatment at the outpatient facility. At the birthing unit an average of 150 to 170 women give birth every month.

For a community living in perpetual poverty, free medical services are a lifeline that they otherwise struggle to afford. Women here, whose husbands earn a pittance as laborers, sometimes have to pay hundreds of dollars to give birth in public hospitals. They have to borrow money from relatives and neighbors to receive proper medical attention, which they invariably struggle to repay.

"Most pregnant women here still have to journey for up to an hour or more to give birth, and many women still give birth at home, because they have no choice"

"Most pregnant women here still have to journey for up to an hour or more to give birth, and many women still give birth at home, because they have no choice," says MSF's Dr. Amna Hammad.

A short distance from the maternal and child health center, past a small bustling market place, lies the rural health center where MSF runs a nutrition program. A little over 30 percent of children younger than five in Pakistan are underweight for their age. Two tiny infants, twins Hamida and Ansa, have just been brought into the clinic by their gaunt, breastfeeding mother. She is an Afghan refugee who settled here in Kuchlak, but lives a hard nomadic life. The twins are 10 days old. Ansa is visibly smaller and malnourished.

"I married at 13 or 14 years old. I am now about 38 years old. It took me over an hour to walk here. I came alone," the twins’ mother says. So far, she has given birth to five boys and four girls. But three of her babies died before reaching their first birthday because she could not afford formula milk, nor could she produce enough breast milk herself.

Staff nurse Hamdullah Kaka oversees the nutrition project that has treated 1,200 severely malnourished children since it opened in 2006. Currently, 60 children are enrolled in the program, which ensures recovery by monitoring their progress with follow-up visits. The patients here have taken to calling him 'uncle' because of his gentle and caring way with children and their mothers alike.

Although poverty is the leading cause of malnutrition in this community, some mothers only feed their children when they think the infants are hungry. Others give their babies painkillers to prevent them from crying when they are hungry. "We are trying to change that by providing them with a quality service and guidance," explains MSF’s Dr. Mirwais Wardak.

MSF provides medical care in a maternal health and a rural health center in Kuchlak. MSF medical teams see more than 10,000 patients every month, mostly women and children from Kuchlak and surrounding towns and villages. Every month, 300 antenatal care consultations are performed and between 150 and 170 women come to the maternal health center for deliveries. Mental health officers organize up to 600 counseling sessions every month. In September 2008, MSF started treating cutaneous leishmaniasis, a parasitic disease transmitted by the bite of certain species of sand flies. MSF also runs a program to treat malnutrition.