Kyrgyzstan: Many "too frightened to seek medical care?

Anja Wolz, MSF field coordinator in Osh, southern Kyrgyzstan, describes the current situation on the ground and how MSF is responding to people's needs.

Tensions remain high in southern Kyrgyzstan, where hundreds of people were killed and thousands wounded during clashes between Kyrgyz and Uzbek communities in mid-June. Doctors Without Borders/Médecins Sans Frontières (MSF) teams are on the ground providing medical care and psychological support to the affected populations. Anja Wolz, MSF field coordinator in Osh, describes the current situation on the ground and how MSF is responding to people's needs.

What is the current situation in Osh? 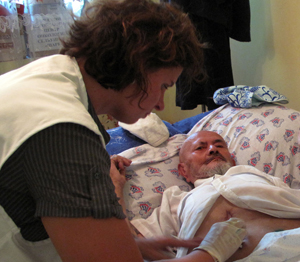 MSF Field Coordinator in Osh, Anya Wolz, changes the wound dressings of a patient who was injured during the clashes in southern Kyrgyzstan in June.

It is still very tense, although you do not really notice it by going around the city. But with hundreds of houses burned, mostly in Uzbek communities, and many shops remaining closed, you can feel that this is still very much a traumatized city. People whose houses were burned live in tents in the middle of the ruins, or they are staying with neighbors or friends. The worst issue, however, is the invisible but permanent state of fear in which people, especially the Uzbeks, live. They are the targets of frequent raids by security forces, followed by arrests and terrible abuses in detention centers. This fear, along with the remaining presence of armed men in and around some health facilities, renders access to health care very difficult for them.

What is MSF doing to assist these populations?

Our strategy is first to address the immediate medical needs of the populations. We are running mobile clinics in areas where people are too scared to venture out of their communities. We also provide emergency care to people who have been released from detention and have suffered beatings. An average of two patients every day report this kind of abuse.  Some of these patients even report having been tortured.

We also provide drugs, medical equipment, and treated water to health facilities that need them. Additionally, MSF psychologists are providing psychological support to the many people who have suffered in the June clashes: some have lost family members; others witnessed atrocities or narrowly escaped death. To reach even more people, we are now training 20 counsellors who will soon be able to start activities in their communities. Finally, we have pre-positioned some medical equipment and drugs in strategic locations to be able to respond quickly in case of renewed massive violence.

How do you see the situation evolving in the next few months?

It is still very unpredictable, as the level of tension between communities does not seem to be decreasing. What worries us most is that thousands of Uzbek people have chosen to go into exile, including educated people such as medical personnel and teachers. The poorest and the most vulnerable are staying behind, thus we may expect even greater lack of access to healthcare for them.

In this region, winter comes as early as October, and this will surely increase the vulnerability of those who now are forced to live in their destroyed houses. That is why we are planning to stay here to provide support to the population at least until the end of the year.