Kyrgyzstan: "Mistrust Between Communities Leaving Many Without Essential Medical Care" 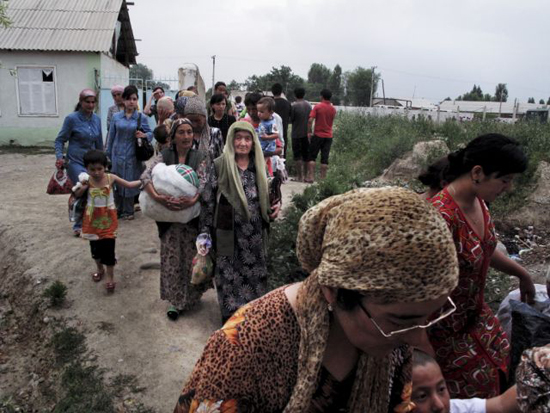 Ethnic Uzbek refugees returning to Kyrgyzstan at a border crossing in Saratash.

Is the situation still tense on the ground?

You can still feel a high level of tension among the population. At the beginning of last week, a hospital supported by MSF in Osh received 25 wounded in one day, many of whom had been beaten. There are still many rumors going around, and there is a lot of fear. But in general, the situation has returned to calm. On Sunday, a national referendum took place peacefully and the majority of the people, who had fled to Uzbekistan or to places inside Kyrgyzstan near the border, have now returned. Many of these people have found their houses burned down.

What do these people need most urgently?

They have lost everything, so they basically need everything. Those who lost their house are trying to stay with neighbors or in schools. In these often overcrowded conditions, they lack clean water and basic hygiene conditions. In response, MSF has distributed hundreds of hygiene kits containing soap, towels and shampoo and has also handed out kitchen utensils, blankets and jerry cans to these families. It is also important to provide them with access to medical services, so we are supporting 12 health facilities throughout Osh and Jalal-Abad regions, mainly by donating drugs, medical equipment and training.

On top of this, we are also seeing mental health problems. In a clinic in Onadyr, MSF doctors are seeing more and more patients suffering from mental disorders. When we arrived at the clinic, medical staff told us that many pregnant women had suffered from miscarriage. Many people we meet are still in deep shock. Mothers tell us that their children don’t sleep at night and don’t play outside anymore, that any single noise scares them and they rush into the house. Last week, we went to Suratash, a village located on the border, to carry out medical consultations for some of the thousands of refugees who were returning to Kyrgyzstan. We saw lots of people crossing the border in tears. We asked them, “How are you?” And they just cried and started talking and talking again. Our nurse cared for an old man who had a serious leg injury. When I accompanied him to the MSF-supported clinic in Onadyr, in the outskirts of Osh, he told me he had been building his house for four years after it was destroyed in an accidental fire. He started to cry like a baby. But all of a sudden his glance turned really firm and he told me, “It’s okay. We’ll do it again.” Then I understood this man would never move from here, that he would stay here.

What is the atmosphere between the different communities after the recent events?

It is difficult to answer this question. But within the medical services, we see a huge lack of trust between communities leaving many without essential care. Despite the significant efforts of Kyrgyzstan authorities to send medical assistance to southern regions, many people won’t actually have access to it. Among the Uzbeks, there is still a lot of fear and mistrust towards governmental services, which are mainly perceived as Kyrgyz. In addition, the presence of armed personnel in health facilities adds to the Uzbek people’s fear of seeking specialized care. On several occasions, MSF doctors have faced the problem of patients who, given these circumstances, have refused to be referred to hospitals. In Nariman hospital, we even had reports of a man with diabetes who was twice arrested by armed men on his bed, removed from the hospital and then beaten. We informed the relevant authorities, talked to armed personnel and called for respect of medical ethics. We hope this will bring positive change.

What can be the role of MSF in this situation?

The role of MSF is to go where there are unmet needs. The latest violence and the subsequent mistrust and fear have exacerbated existing medical needs. On the one hand, small clinics have been overwhelmed with patients and, on the other, most of the official health facilities remain inaccessible to a significant part of the population. MSF has therefore decided to support several medical structures, with a focus on those that had received very little assistance—for instance, in Onadyr, where MSF doctors and nurses are working alongside local staff. We are liaising with personnel from all the facilities, we are accompanying patients during referrals to offer some reassuring presence, and we will hopefully ensure continued medical care for all patients. But there is still a long way to go.