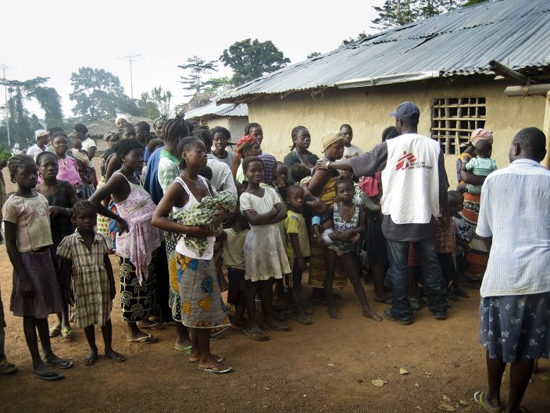 People who fled violence in the Ivory Coast seeking treatment at an MSF facility in Liberia's Nimba County.

Since last December, tens of thousands of people have fled post-election violence in Ivory Coast and sought refuge across the country’s border with Liberia. Some 38,000 people, mainly women and children, have reportedly arrived in Liberian’s Nimba County.

“Today we don’t see more people arriving, but with this massive influx of refugees, the medical structures are already overwhelmed, and the medical needs have significantly increased,” says Helga Ritter, MSF’s country representative in Liberia. “For several weeks, we have been monitoring the situation and the medical support MSF can provide. We have identified four sites across the County where both local people and refugees need our medical assistance. We are running mobile clinic once a week in each location.”

Free primary health care is provided to both locals and refugees, and the team has also put in place a referral system for patients who need care in one of Nimba’s two hospitals. In the main, MSF medical teams are treating respiratory infections, watery diarrhea, and malaria. An average of 120 consultations is being carried out every day.

“Ivorians have sought refuge in about 70 villages along the border,” explains Katrin Kisswani, an MSF project coordinator. “They say that they have fled their country because they were fearing violence. They are sheltered in local family houses. In some places refugees were given a house. In other villages they stay under plastic sheeting. Without a doubt, this situation is difficult for them and is also putting an additional strain on local families already coping with limited resources and living in precarious conditions.” 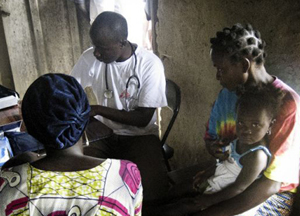 Mothers and their children receive a medical consultation from an MSF staff member in Nimba.

In the town of Bahn, a camp for 15,000 people set up by the UNHCR has just opened and is meant to shelter some of the refugees who’ve been staying with local families for more than two months. The MSF team is screening the medical status of the refugees arriving in the camp, providing care when needed, and vaccinating children under 15 years against measles. MSF is also providing technical support and providing free drugs to the Ministry of Health center in Bahn.

The size of the area where refugees have scattered is a challenge for MSF. “By being mobile, we try to monitor as best as we can the medical situation of the refugees and of capacity of local health services to cope with these arrivals”, says Kisswani. “We are prepared to change the sites where we organize the mobile clinics as well as to set up a larger medical response, if necessary.”

On the other side of the border, in the Ivory Coast town of Duékoué, MSF teams are also providing medical care to the local population and the people displaced following the post election violence.

MSF is an international humanitarian medical organization. MSF teams have been working in Liberia since 1990. The handover of its last hospital services in June 2010 is the most significant reduction of activities during the organization’s two decade presence in the country. MSF remains in the capital, Monrovia, to support the Ministry of Health and Social Welfare addressing gender-based sexual violence.