Liberia: "Sexual violence is a stain on our society"

“We meet parents on a daily basis who are unhappy that their children, who have been raped or abused, will go to the police. These parents are anxious, they are afraid for their children’s safety. So they turn to us with their concerns and for support.” 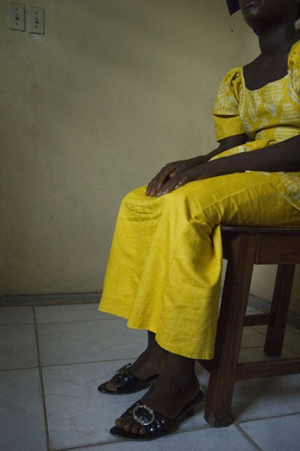 Portrait of a 14-year-old who was raped by her step-father in Monrovia.

“Sexual violence is a stain on our society,” says Theresa Saday, counselor for MSF in Liberia. “I am happy to speak on behalf of young people whose voices go unheard.”

Saday, 40, is making a difference for victims of one of the enduring consequences of Liberia’s 14-year bloody civil war: sexual violence. The majority of victims are children, and as a mother, Theresa shares the fears of many Liberian parents for their children’s safety. Her own daughter is 16 and she worries daily for her wellbeing and for her future. This is why she is in Bushrod Island, a densely populated area of Monrovia where MSF runs a sexual violence program.

“Every day I meet the victims of sexual violence and their parents,” says Saday. “Meeting them motivates me and ignites my passion to fight sexual violence. These are children who need my help, and I want other children, women, and men to be safe and respected.”

For five years, Saday has worked with MSF to provide psychosocial and emotional support to victims of sexual violence and their parents. She and the MSF social workers help survivors and their relatives overcome the stress and trauma of sexual abuse and build confidence to seek the assistance that is available.

MSF is part of a special collaboration unit with the Ministry of Health and the police force, working so that cases of sexual abuse are properly documented and victims have access to medical support and legal advice. But it is still a big challenge to convince parents and survivors that reporting sexual violence is the right thing to do.

“We meet parents on a daily basis who are unhappy that their children, who have been raped or abused, will go to the police,” said Saday. “These parents are anxious. They are afraid for their children’s safety. So they turn to us with their concerns and for support.”

Saday also plays an important role advocating to the government for free access to medical care for all victims of sexual abuse. Her experiences in the two health centers and hospital where MSF works give her strength to speak out about the rampant increase in sexual violence and to call on the government to do something.

“Every week is a challenge," she adds. "But my five years working with MSF has been very empowering. Our society faces a shattered future as long as our children continue to face the threat of sexual abuse and violence.”