Liberian Refugees Pay a High Price for Crossing into Guinea 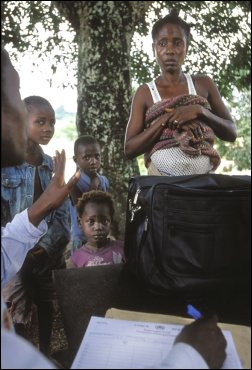 The refugee camp at Kuankan, 30 miles (50 kilometers) inside Guinea in Macenta Prefecture, was set up to house 15,000 people. But from January to August 2002, nearly 30,000 people made their way to Kuankan after having been driven out by fighting from Lofa, northern Liberia. Since late August 2002, MSF has been providing health care to refugees in the camp as well as in villages along the border.

Nearly 8,000 of the newest arrivals had been relegated to group tents set up in a swamp 3 miles (5 kilometers) away from the main facilities. MSF logisticians were appalled by the conditions: there was no health post, more than 100 people were crammed into 50 person tents that leaked, and latrines were placed directly in front of the tent entrances. People had not even been given blankets.

"Even if you made it to the camp, you got stuck in a swamp in a tent that leaks during the rainy season," said Patrice Pagé, head of mission for MSF during July and August. "As soon as you left the tent, you were up to your knees in mud," he continued. "It had become the acceptance of the unacceptable."

Such an unhealthy setting, coupled with the weakened heath states of the refugees, posed a serious epidemic risk, so MSF began setting up new facilities on an adjacent hill. Logisticians provided non-food items like blankets, jerry cans, and soap, in addition to wood and plastic sheeting for more private shelters. And a medical team of a doctor and 2 nurses opened a health post in the new camp, performing nearly 100 consultations a day.

MSF has been working in Guinea since 1989. Five MSF volunteers and 30 local employees staff the two health centers in the town of Macenta. Medical teams also run mobile clinics in four transit camps near the border.

They Thought The Worst Was Behind Them

War swept into the small village of Zorzor, Liberia, in the early morning of June 4, 2002. Amid heavy shelling and crossfire, people ran for their lives, fleeing in every direction into the surrounding forests. The fighting claimed some lives and the chaotic flight separated many families. But one 45 year-old Liberian was fortunate to have escaped with his life and family intact.

He, his wife and teenage daughter trekked through the bush for three days. When they arrived weak and exhausted at Yesu, a village just inside the Guinean border, they thought the worst was behind them.

But Guinean soldiers would not allow the family to rest, and demanded they either continue on to Fassankoni, deeper inside Guinea, or be returned to Liberia by force. One of the soldiers then stepped forward to offer another malicious option.

"The soldier said we had to give him my daughter for the night if we wanted to stay there," the man said. "What could we do?"

Since civil war again broke out in Liberia's northern Lofa region in January 2001, nearly 250,000 Liberians have sought refuge in Guinea, Sierra Leone, and Ivory Coast, 70,000 since January 2002 alone. Many Liberians have similar stories of escaping one form of violence only to be trapped by another.

During July and August 2002, teams from Doctors Without Borders/Médecins Sans Frontières (MSF) collected hundreds of testimonies from refugees in Guinea. They recounted to MSF the extortion, rape, forced conscription, forced labor, forced repatriation to war zones, beatings, and imprisonment they suffered as they sought assistance and refuge. These testimonies reveal how this population, exhausted by war and exposed to abuse of all kinds, lacks any meaningful protection when they finally reach Guinea. To add insult to these injuries, all of this has occurred in plain view of a passive international community.

Click here to read testimonies from refugees in Guinea.