Because detainees are being tortured and denied urgent medical care, MSF is suspending operations in Misrata's detention centers. 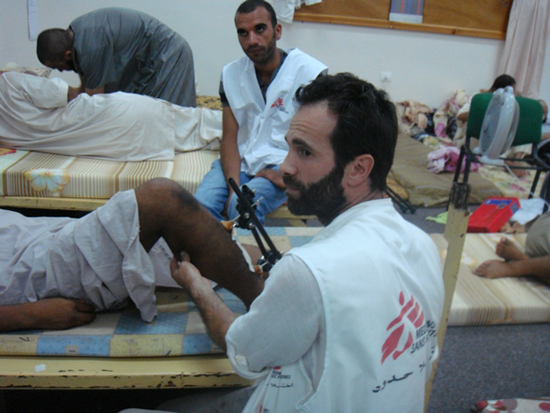 An MSF physiotherapist works in one of Misrata's detention centers, where MSF is suspending operations.

MSF teams began working in Misrata’s detention centers in August, 2011, to treat war-wounded detainees. Since then, MSF doctors had been increasingly confronted with patients who suffered injuries caused by torture during interrogation sessions. The interrogations were held outside the detention centers. In total, MSF treated 115 people who had torture-related wounds. The organization reported all the cases to the relevant authorities in Misrata. Since January, several of the patients returned to interrogation centers were again tortured.

“Some officials have sought to exploit and obstruct MSF’s medical work,” said MSF general director Christopher Stokes. “Patients were brought to us in the middle of interrogation for medical care, in order to make them fit for further interrogation. This is unacceptable. Our role is to provide medical care to war casualties and sick detainees, not to repeatedly treat the same patients between torture sessions.”

MSF medical teams were also asked to treat patients inside the interrogation centers, which the organization categorically refused.

The most alarming case occurred on January 3, when MSF doctors treated a group of 14 detainees who returned to a detention facility from an interrogation center. Despite previous MSF demands for the immediate end of torture, 9 of the 14 detainees had suffered numerous injuries and displayed obvious signs of torture.

The MSF team informed the National Army Security Service—the agency responsible for interrogations—that a number of patients needed to be transferred to hospitals for urgent and specialized care. All but one of the detainees were again deprived of essential medical care and were subjected to renewed interrogations and torture outside the detention centers.

After meeting with various authorities, MSF sent an official letter on January 9 to the Misrata Military Council, the Misrata Security Committee, the National Army Security Service, and the Misrata Local Civil Council, again demanding an immediate stop to any form of ill treatment of detainees.

“No concrete action has been taken,” said Christopher Stokes. “Instead, our team received four new torture cases. We have therefore come to the decision to suspend our medical activities in the detention centers.”

MSF has been present in Misrata since April 2011, following the outbreak of conflict in Libya. Since August 2011, MSF has worked in Misrata’s detention centers, treating war-wounded, performing surgeries, and providing orthopedic follow-up care to people who had suffered bone fractures. MSF medical teams have carried out 2,600 consultations, including 311 for violent trauma.

MSF will continue its mental health activities in schools and health facilities in Misrata, and will continue to assist 3,000 African migrants, refugees, and internally displaced persons in and around Tripoli.

MSF is an international medical humanitarian organization that has worked in Libya since February, 2011. To ensure the independence of its medical work, MSF relies solely on private donations to finance its activities in Libya and does not accept any funding from governments, donor agencies, or military or political groups.