As Libya grapples with restoring normality after the revolution, migrants, refugees, and internally displaced people remain in a vulnerable and precarious situation. 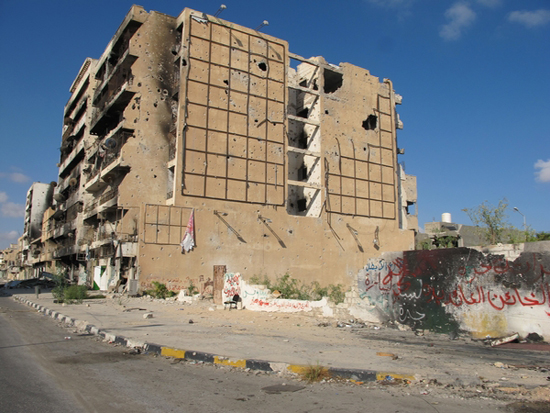 Nearly all buildings in Tripoli street in downtown Misrata were completely destroyed during the war.

As Libya grapples with consolidating state authority and restoring normality after the revolution, groups of migrants, refugees, and internally displaced people remain in a vulnerable and precarious situation. Doctors Without Borders/Médecins Sans Frontières (MSF) is continuing to provide basic medical and psychological assistance to these groups in Tripoli. In parallel, MSF will also end its remaining activities in Misrata at the beginning of April to refocus on other areas of intervention.

There are concerns that camps in Tripoli are being shut down by authorities without any clear strategy that the people will be appropriately cared for afterwards, leaving former residents in an even more vulnerable situation. Already on February 14, a camp where hundreds of primarily sub-Saharan African migrants had taken refuge was closed and evacuated. On March 20, another camp housing approximately 300 Somali refugees was evacuated, with residents now being spread out over Tripoli. As MSF had been running mobile clinics in these two camps, it is now trying to trace patients to be able to ensure the provision of follow-up care if needed.

Currently, MSF is running mobile clinics in two camps for internally displaced people in the city, providing basic health care and psychological support. When necessary, MSF also assists in referring residents to secondary health structures. The camps, containing a total of approximately 4,000 people, are primarily made up of people from the Tawargha city. Members of this community were forcibly displaced at the end of the conflict, and are unable to return home. On average, MSF performs 50 consultations in these two camps every week.

In addition, in March MSF donated two water bladders and a distribution ramp to a detention centre in Gharyan, south of Tripoli, where primarily sub-Saharan migrants from West Africa are being held. It also donated truckloads of medical supplies to two medical centers in and around Bani Walid—a city cut off from external support because of its former role as a Qadaffi stronghold.

Activities in Misrata to End after One Year

MSF arrived in Misrata in April last year, when the city was besieged and at the peak of fighting, providing support to health structures overwhelmed with wounded patients.

In January, MSF suspended all its activities in detention centers in Misrata after being increasingly confronted with patients who suffered torture injuries during interrogations, despite demands for an immediate end to any ill treatment. Since then, MSF has continued to engage in discussions, lobbying, and advocacy concerning this matter. Since July, MSF has been running mental health activities in Misrata through the provision of psycho-educational sessions to more than 3,000 beneficiaries in the community, including at schools, community centers, factories, Koran centers, and the university. However, MSF will be ending these remaining activities in April, and is currently assessing needs and looking at additional ways of providing medical expertise and supplies to populations in need in Libya.