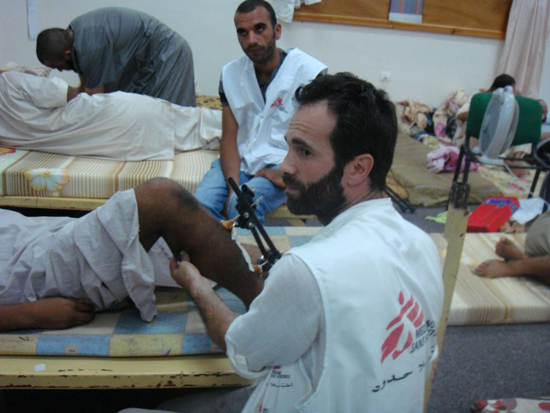 An MSF staff member checks on a patient in a prison in Misrata.

After 10 days of trying, MSF finally managed to deliver medicines and medical supplies to the town of Sirte on October 3. As the main site of the fighting in Libya these days, Sirte has seen its health care situation deteriorate significantly of late, according to doctors in the town.

“They say that their hospital is overrun with wounded and they aren’t always able to respond to other gynecological or pediatric emergencies, or treat people suffering from chronic conditions,” said Dr. Mégo Terzian, MSF’s emergency response coordinator. “Moreover, they have to deal with cuts in power and water and a lack of urgent medical supplies. They need anesthetics, antibiotics, analgesics and blood for transfusions.”

Initially, the fighting made it so the MSF team based in Misrata could only deliver medicines to a small town 10 kilometers [6 miles] away Sirte. But on October 3, MSF managed to send medicines and medical supplies—notably an oxygen concentrator and wound dressing materials—to Sirte itself.

Patients were receiving emergency treatment at medical health posts close to the front lines of Sirte and the nearby town of Beni Walid, and a medical health center had been set up in an old holiday home 50 kilometers [30 miles] from Sirte. MSF provided the center with logistical support, medicines, and medical supplies, and organized first aid training for personnel. Once stabilized, the injured are taken by ambulance or helicopter to Misrata or Tripoli, where the closest hospitals with surgical capacity are located.

In the Kasr Ahmed hospital in Misrata, an MSF surgical team looks after urgent and wounded patients. It also looks after prisoners of war who are being detained in local prisons and brought to the hospital for surgery.

Due to fighting, civilians are fleeing Sirte and Beni Walid and other former regime strongholds. Some head to Tripoli, while others seek refuge around Misrata or join camps for internally displaced people in Kaddayia, Wachka, and Al Hicha, where MSF is supplying medicines to Libyan doctors working in a camp for 2,000 people. MSF is monitoring the situation in these camps to ensure medical access for the displaced.

More generally, MSF also has teams in hospitals in the western towns of Yefren and Zintan providing medical supplies, drugs, and mental health support. In Misrata, MSF is providing medical care, including post-operative care, and mental health support in many prisons, including those where captured soldiers are being held. MSF psychologists play a supervisory and training role for Libyan psychologists and hold consultations within the community.

MSF is also performing medical consultations, providing mental health care, and distributing essential goods to migrants who are taking shelter in and around Tripoli.