"Life is Suffering": Among the Displaced in Eastern DRC

After her husband was killed by the violence plaguing eastern DRC, Victorine is living among other people displaced by the strife, facing a difficult future for herself and her four children. 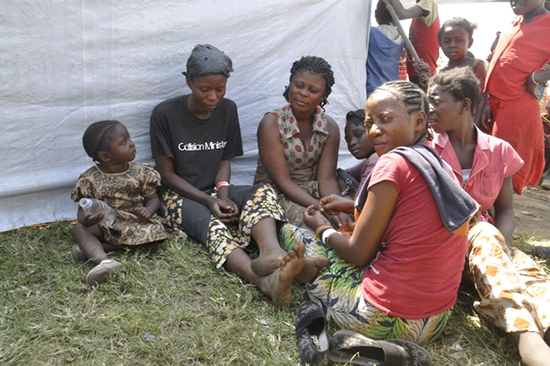 Victorine (second from left, in black T-shirt, sits against a tent near Sotraki Stadium.

Victorine and her family fled their home near Goma, in the eastern Democratic Republic of Congo (DRC), during four days of violent clashes in late May between the Congolese army and the M23 rebel group. She is now one of up to 5,000 people taking refuge in Sotraki Stadium, on the outskirts of the city.

Slim and dressed in a dusty black T-shirt and skirt, she leans back against a fence while keeping an eye on her four children, aged from two to ten. She'd been sitting in this same spot for the past 24 hours. Like just about everyone around her, Victorine is exhausted. Many of those arriving have been on the move for several days; others have been hiding in schools and churches to escape the fighting.

Victorine left her home village of Kibati, north of Goma, with her husband and four children. “We heard bombing, we were scared,” she says. Bullets were flying and bombs were dropping on houses. A neighbor was killed by a stray bullet.

This was the third time since 2008 that the family had been forced to flee. The last time was just six months earlier, during the M23 attack on Goma in November 2012, when the family spent two weeks sheltering in a school as they waited for the fighting to die down.

They made it through that ordeal largely unscathed, but not this time. As they fled, Victorine’s husband was killed. Victorine and her children made it to a local school, where they hid for five days, before heading for Sotraki Stadium. Their village is on the frontline of the fighting, and Victorine is preparing for a long wait before it is safe enough to return home.

Tensions have been high in Kibati for several months. “Life is dangerous and there is suffering,” says Victorine, who grew soya and haricot beans in the fields outside the village to feed her family. “When we want to go and work in the fields, there are rebels who harass us,” she says. Threats, extortion, and rape were commonplace.

Right now, Victorine's primary concern is to find food for her children. “If I had money,” she says, “I could buy food at the market.” She has no money, though. All she managed to bring with her from home was a bundle of clothes.

The previous day, she had taken two of her children to the mobile clinic Doctors Without Borders/Médecins Sans Frontières (MSF) set up in a tent to provide basic health care to those sheltering in the stadium. Both children were sick with malnutrition and diarrhea, likely due to the fact that they'd been without clean water, toilets, proper nourishment, or decent places to sleep since they left the village. Last night, the family slept out in the open. “Right here,” says Victorine, pointing to the patch of dirt where she is sitting now.

Now widowed at the age of 24, with four young children to care for, Victorine believes her chances of remarrying are slim and that she will therefore need to look out for her children on her own. “A potential husband would not love my children,” she says with a weary smile. She is worried about the state of her fields, and her house–if it survived the bombs, it may have been ransacked. But most of all Victorine worries about how she will protect her children and help them to survive the difficult times ahead.

More than 100,000 people are currently sheltering in a number of camps for displaced people around Goma in eastern DRC’s North Kivu region. MSF is working in two of these camps, Bulengo and Mugunga III, and now in Sotraki Stadium as well. The teams are focusing on providing basic health care and vaccinations and preventing infectious diseases such as measles and cholera.