Malawi: "Almost every family has been affected by measles"

Dr. Neil Stone, a physician from Scotland, is working with MSF to respond to a major measles epidemic in Malawi in southern Africa. 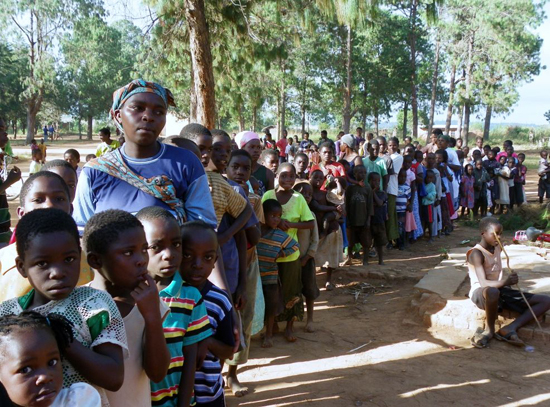 Children wait to be vaccinated against measles at an MSF mobile clinic.

Dr. Neil Stone, a physician originally from Glasgow, Scotland, is working with Doctors Without Borders/Médecins Sans Frontières (MSF) to respond to a major measles epidemic in Malawi in southern Africa.

Outbreak of a Deadly Disease

“Come forward those patients with measles,” shouts a medical assistant from Lirangwe Health Central in a rural area close to the city of Blantyre, in Malawi. There is a near stampede as 25 mothers with babies on their backs push to the front of the crowd. All of the babies are feverish, with runny noses, red eyes, and a telltale rash over their bodies—visible proof of the largest measles epidemic to hit Malawi in over a decade. This particular health center has been seeing more than 100 cases of measles every week, and the outbreak has led to more than 9,000 cases across Malawi so far.

Measles is caused by a virus and is highly contagious, spreading easily by coughing or sneezing.  Here, a disease which many people in the West dismiss as a minor childhood ailment can be a killer. While most sufferers will recover uneventfully, some will go on to have potentially fatal   complications such as pneumonia and diarrhea. Children with a vitamin A deficiency can sometimes lose their sight, while others can end up with an incurable form of meningitis, though, luckily, this is rare.  When you factor in poor nutrition, desperate poverty, and the high prevalence of HIV, a measles outbreak in this part of Africa can be deadly.

MSF has been working in Malawi for over 20 years and was therefore well placed to respond to the measles outbreak.  My role has been to support Malawi’s health workers and to help them record the true scale of the epidemic. Malawi has a chronic shortage of medical staff—there are just two doctors per 100,000 people in Malawi, one of the lowest rates in the world. Health centers are usually staffed by medical assistants who have just two years training and see up to 200 patients per day. 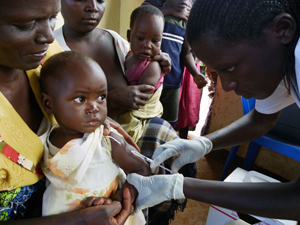 An MSF staff vaccinates a baby against measles.

I have been visiting all the health centers in Blantyre district, helping the staff to identify measles cases, deal with complications, and identify those who needed referral to hospital. The drugs that are essential for treating measles cases are often in short supply or completely unavailable, so MSF has made regular donations of whatever is necessary. This includes vitamin A supplements, antibiotics for secondary infections, oral rehydration salts for dehydration, and paracetamol for fever—all of them simple drugs, but lifesaving.

MSF has also provided extra nursing staff, drugs, and equipment to the main hospital in Blantyre—Queen Elizabeth Central Hospital—to help them deal with the most severe cases of measles.  Two extra wards have been opened just for measles cases, one for adults and one for children. Both facilities have been entirely full during the epidemic.

Treatment is one thing, but the only really effective way to halt a measles epidemic is through vaccination. In collaboration with the Ministry of Health, MSF has been carrying out a mass vaccination campaign, the biggest of its kind ever seen in Malawi.  Some 200 local staff have been trained in vaccination techniques and how to maintain the ”cold chain” – the process by which the measles vaccines are kept at between two and eight degrees Celsius [36 and 46 degrees Fahrenheit] at all times, a major logistical challenge in a tropical climate.

We have constructed hundreds of vaccination sites to provide shade for staff from the burning sun, as well as to ensure an orderly flow of patients. Organizing this massive health intervention is a major operation. All children between six months and 15 years old—the age group worst affected by the epidemic—are being offered vaccination free of charge.

At times, the crowds are overwhelming. Under the hot African sun, the lines snake around the vaccination site several times. The town criers have effectively spread the message around town using megaphones to publicize the campaign and why it is necessary, while radio and newspaper publicity have ensured that the public is informed.

Parents are desperate to have their children vaccinated. Almost every family has been affected by measles in one way or another.  At times the crowd becomes unruly, with people jostling each other to reach the front. They all want to do the best for their children.  On a single day during this campaign, more than 80,000 children were vaccinated.

My role in this has been to ensure that everything is running smoothly, and to deal with any accidental needle injuries which occur—an important consideration given the appallingly high prevalence of HIV in Malawi.

As I make my health center visits in the weeks following the vaccination campaign, beaming staff delight in telling me that they are seeing fewer and fewer cases of measles every day.  An intervention which costs one euro per person is clearly going to save hundreds of lives.

But we are not finished yet. MSF is currently vaccinating children in the capital, Lilongwe, and is preparing to move on to other districts around the country. By the end of our campaign, we aim to have vaccinated more than 2.5 million of Malawi’s children.