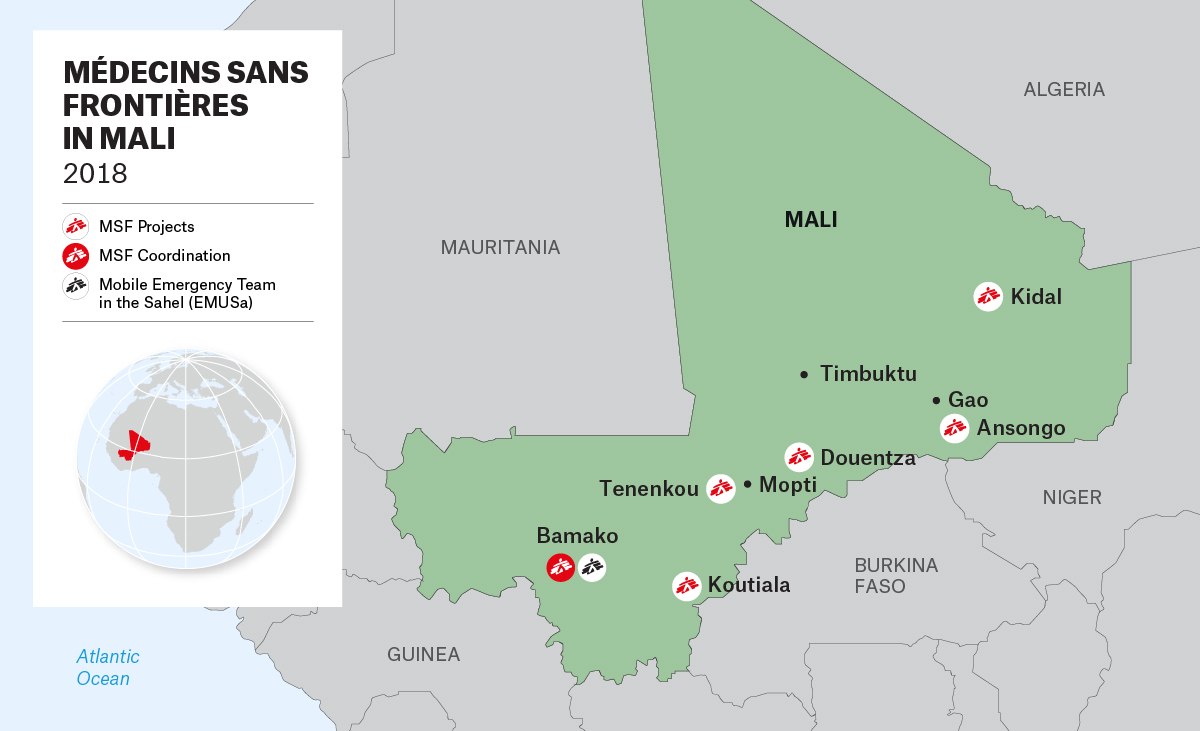 Being vaccinated against potentially fatal diseases like diphtheria, measles, whooping cough, meningitis, pneumonia, yellow fever, and others is a rite of passage for many children the world over. But in northern Mali’s vast desert region of Kidal, where insecurity, isolation, and limited health infrastructure hinder access to care for many communities, protecting children from these illnesses can be difficult.

After opening projects in the area in 2015, teams from Doctors Without Borders/Médecins Sans Frontières (MSF) began to notice that many children from the region’s nomadic communities had not been immunized against common illnesses for several years. In response, in January 2018 MSF launched a campaign in cooperation with local authorities and the Malian Ministry of Health to immunize 10,000 children under five years old using a multi-antigen vaccine.

But covering 60,000 kilometers [about 37,000 miles] of desert roads poses a steep challenge. “Bringing this campaign about requires a lot of resources,” said Patrick Irenge, MSF medical coordinator in Mali. “Before anything else, you have to make the vaccines available, and then get logistics support to move teams around a vast region where access to isolated populations is complicated.”

Preserving the doses in the desert heat and assembling teams to administer them pose challenges as well. “Vaccines have to be kept at a temperature of between 2 and 8 degrees [just above freezing] in a region where temperatures can reach up to 50 degrees Celsius [122 degrees Fahrenheit],” said Irenge. “On top of that, mobilizing so many people—from qualified medical personnel to drivers who know the region perfectly—is no mean feat.”

The campaign will take place in three stages in order to follow the vaccination calendar established by Mali’s Ministry of Health. Measles, yellow fever, and meningitis vaccines need only to be administered once to take effect. Others must be delivered in three separate dosages. This process is further complicated by the needs of nomadic communities who do not always stay in one location over a period of weeks.

But Irenge and his team are undeterred. “[The movement of communities] poses an access problem for the vaccination activities,” said Irenge. “But vaccination is an efficient preventative measure [that] protects the most vulnerable.” MSF has now completed the first two stages of the vaccination campaign, and is on track to finish the last stage by the beginning of May.

MSF has been present in Mali since 1985, and first provided medical assistance to the people of the Kidal region at a maternal health project from 1998 to 2008. We returned to Kidal in 2015 with the aim of ensuring access to health care for isolated communities, especially women and young children. MSF teams also work in the districts of Ansongo (Gao region), Koutiala (Sikasso region), and Tenenkou and Douentza (Mopti region), notably by strengthening the provision of maternal and pediatric care.