Malnutrition in the Sahel: One Million Children Treated, But What's Next? 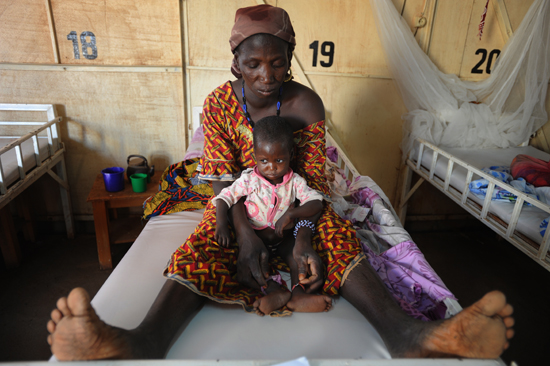 A mother and her two-year-old await treatment at an MSF Inpatient Therapeutic Feeding Center in Niger. 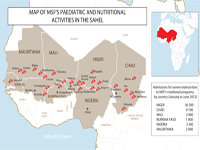 View a full map of MSF's activities in the Sahel region.

One million severely malnourished children will be treated this year in the countries of the Sahel, according to UNICEF. Every year, the region faces a hunger gap between June and October, depending on the country, a time period between the depletion of the previous year's food stocks and the next harvest. Malnutrition rates always hover near warning level in this mostly desert region, but during the hunger gap, the number of cases spikes and hundreds of thousands of children become at risk of death.

Between January and June, 56,000 children were admitted to Doctors Without Borders/Médecins Sans Frontières (MSF)'s nutritional programs in seven Sahelian countries, a number that is higher than, although still comparable to, the number of admissions over the same period last year. In June, malnutrition cases admitted into MSF's Sahel programs exceeded 3,000 admissions per week. Growing awareness of the situation has led to improved care, but the "permanent crisis" of malnutrition in the Sahel will require a new approach to prevent children from suffering year after year.

In this interview, MSF pediatrician Susan Shepherd and MSF nutrition specialist Stéphane Doyon Discuss the situation in the region.

One million children suffering from severe malnutrition will be treated this year by governments and aid organizations across the Sahel. How should we interpret this number?

Susan Shepherd: It’s both a failure and a success. The failure is that each year, countries within the Sahel will face recurrent, large-scale nutritional crises that are growing even worse in some countries. One million malnourished children—that’s an enormous figure. But the most important take away from this year is how all of the aid actors—governments, United Nations agencies, and NGOs—have managed the crisis. Because of this, the major success is that for the first time, one million malnourished children will be treated in the Sahel, and the vast majority of these one million children will recover.

Stéphane Doyon: Prior to the 2005 nutrition crisis in Niger, malnourished children didn’t receive treatment and childhood malnutrition was virtually unrecognized. One million malnourished children receiving treatment doesn’t necessarily imply things are getting worse, but rather implies a major step forward in treatment. Improved malnutrition management results in large part from the political will summoned by the governments who wish to tackle this pathology. For the first time since the 2005 nutritional crisis in Niger, the most-affected countries have implemented ambitious response plans for treating malnourished children and establishing early preventive measures. Donors have committed to funding programs for therapeutic foods and nutritional supplements that are adapted to the needs of infants, even if all the funds have not yet been released.

Is this year's situation worse than usual?

Dr. Susan Shepherd discusses the need for long-term solutions to the problem of malnutrition in the Sahel Strip.

Susan Shepherd: For young children in the Sahel, every year is difficult. The Sahel region is without a doubt the deadliest region in the world for young children. Malnutrition, early-childhood diseases and malaria are devastating. Between fragile health care systems and inadequate immunization coverage, all the necessary conditions exist for high infant mortality rates.

Nonetheless, there is some good news. We are beginning to see the extent of the malnutrition problem in this region. Effective prevention methods are now available, thanks to ready-to-use nutritious food supplements that contain milk and are adapted to the needs of children. A child who is immunized, is shielded from malaria, and eats the right kind of food will not become malnourished.

Stéphane Doyon: Treating a million children is ambitious, but remains realistic. Each of these countries faces its own particular constraints, but the will and the means are there. In Chad, for example, we are almost starting from zero: the response to the nutritional crisis this year will have to be built on top of a very weak health system and the intentions are to treat twice as many children this year (127,000) compared to the number treated in 2011 (65,000). And the impending rainy season will make the deployment of aid even more complex. In Mali, political instability and the risk of kidnapping just create additional challenges.

In Niger the situation is substantially different. In recent years, the country has addressed the issue of malnutrition head-on by improving treatment and conducting prevention campaigns to reduce the impact of the crisis among young children. Despite all of these measures, almost 400,000 malnourished children will likely be treated this year in Niger, a number which is higher but comparable to the two last years. This is because Niger’s malnutrition problem, just like the malnutrition problem in the other countries of the Sahel, is endemic. If we really wish to change things, our entire approach to malnutrition needs to be re-imagined in order to blunt its impact and lessen infant mortality.

How can we break the cycle?

Stéphane Doyon: Today, the management of this nutritional crisis is done in emergency mode. When we speak of an emergency, we are mostly referring to humanitarian interventions. This is where we run into one of the major challenges to enacting true change: for governments, these models of humanitarian action are difficult to repeat and to sustain over the long term. Therefore, we have to break out of this emergency response model and start developing a longer-term approach. Another challenge lies in understanding what exactly malnutrition is: a medical problem, related to a lack of food that satisfies the particular needs of children. Countries which have successfully addressed the problem of childhood malnutrition include nutrition in health systems. Long-term solutions should therefore include medical responses; development, agriculture and treatment of malnutrition are all complementary.

Susan Shepherd: Malnutrition should be treated any time and any where it occurs, just like any other early-childhood illness. Early treatment and malnutrition prevention measures should be implemented just like immunizations for childhood diseases. Food for a young child is just as important as being immunized and sleeping under a mosquito net! The idea is therefore that the treatment and prevention of malnutrition should be integrated into a country’s health system and treated as part of true public health measures.

However, to reach this point, we need to make prevention and treatment as simple as possible for mothers. It is thanks to the mothers that the treatment of children can now be done at home instead of in the hospital. Mothers are also the ones who have made the preventive distribution of ready-to-use supplementary foods such a success, since they are the ones who administer foods to their children. Today, in MSF’s nutritional programs throughout the region, we are trying out different operational strategies as a way to find the most practical and effective approach possible. For example, we are thinking of having the mothers themselves measure MUAC (middle upper arm circumference) to assess the nutritional status of their child. The solutions are out there, we just have to find them.

MSF runs 21 nutritional programs in the Sahel region, nine of which opened this year in response to acute needs in parts of Chad, Mali, Senegal and Mauritania. Three additional programs are planned to open in the coming weeks. Of the 56,000 severely malnourished children treated by MSF in the Sahel between January and the end of June, more than 36,000 were treated in Niger. MSF teams are also working in northern Mali, Niger, Burkina Faso and Mauritania to assist people displaced by conflict in Mali.