Mardan, Pakistan: "We all have this disease in the village, especially the children" 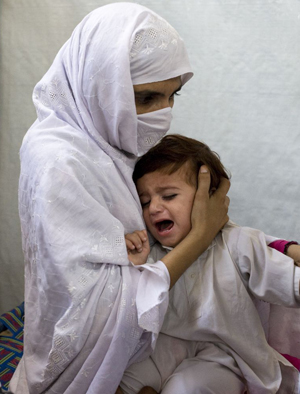 Maaz Amankhel, 14 months old, is receiving an intravenous drip with a rehydrating solution as part of ther treatment in MSF's cholera treatment unit in Nowshera, near Mardan in northwestern Pakistan.

When around one million people fled fighting in Swat Valley and Buner District in May 2009, many sought refuge in Mardan, a district in Pakistan’s North West Frontier Province. In this remote area of Pakistan, Doctors Without Borders/Medecins Sans Frontieres (MSF) is helping local health clinics and hospitals to cope with the massive influx of people and provides medical care, tents and relief items such as soap and blankets to thousands of displaced families.

It’s painful to watch 14-month-old Maaz Amankhel writhing in pain from severe stomach cramps. For the last three days, she has suffered constant diarrhea and vomiting. Her exhausted and worried mother tries to comfort her. "We all have this disease in the village, especially the children. In my family, we are 20. There are five children with this disease," she explains.

The intravenous drip feeding into Maaz’s tiny arm contains an all important rehydrating solution, which means that she will be able to recover soon. It is just after 9 a.m., but the heat is stifling and there is barely a breeze stirring through Nowshera, a town in Mardan District in Pakistan’s Northwest Frontier Province. Inside a small building adjacent to the district hospital, the cries of anguished children are thick in air of the Cholera Treatment Unit (CTU), where Maaz is wriggling on a stretcher in the female ward.

MSF started a project in Mardan District in response to the massive influx of hundreds of thousands of people that have been fleeing heavy fighting between Pakistani military forces and fighters from armed opposition groups in the Swat District since May 2009. Following their arrival, health services in the area were stretched to the limits. Between June and early November, MSF provided medical support to help alleviate the patient load of local health structures in addition to constructing a camp housing up to 5,000 people.

In September 2009, due to the high incidences of cholera in the area, MSF opened another cholera treatment facility—this time in Nowshera, a 20-minute drive north of Mardan. Within days, word spread and treatment wards were full of patients—mainly impoverished locals who otherwise would have suffered and risked dying at home.

The noon sun is unforgiving as it beats down outside the Mardan Medical Complex. Most townspeople in Mardan have confined themselves indoors. But at the 60-bed cholera treatment center on the hospital grounds, nurses and doctors rush about busily from bed to bed despite the heat, tending to patients. In just under a week, this treatment center saw 100 patients admitted—a sign that the flow of patients is subsiding after the peak of more than 1,000 patients one week in August.

In the tented cholera treatment wards, the humming of large electric fans is interrupted by the sound of an ambulance coming to a halt on the gravel. Nurses and attendants are carrying Mudasher, a 13-year-old boy, in on a stretcher. He is immediately given oral rehydration solution, containing glucose and electrolytes, but minutes later he is caught in a vomiting convulsion once again.  In another tent, Hussan Asra, 45, is also one of the new arrivals. She is a mother of five and is very weak and dehydrated. She can barely speak.

"Most patients, up to 70 percent, are severely dehydrated when they reach us," says MSF's Dr. Sylke Neumann, who heads the facility.  "About a third have to be put on intravenous rehydration immediately. The patients often don’t seek treatment until their case has become severe. While we treat them, we also have to do a fair amount of counseling about health issues, because as soon as they are taken off the IV lines, they demand to go home."

According to Dr. Neumann, the majority of patients seen are women and they often arrive in much worse conditions than men. This is often because women cannot leave home unaccompanied, and have to wait for husbands or male relatives to bring them to healthcare facilities while their condition deteriorates. Inadequate hygiene and sanitation infrastructure also explains the rise in the number of acute diarrhea and cholera cases in Mardan. Dr. Neumann explains that rudimentary latrines built without septic tanks contributes significantly to health risks.

As time passed in recent months the number of internally displaced people in Mardan slowly decreased as families started moving back home to Swat. Asad Ali, a doctor working in the emergency room, says that at the peak of activities about 50 people were treated in the emergency room each day. More recently, about half as many people sought assistance, the majority from Mardan—another indicator that the internally displaced people were returning home.

Between June and the end of October MSF teams treated 1,672 cholera patients in three cholera treatment centers set up in the Mardan area. About 58 percent of patients were suffering from severe cholera. There were no cholera-related deaths among children under five. MSF medical staff continued to support the emergency room at the Mardan Medical Complex until the end of October 2009. Some 3,224 patients were treated between June and October.