In 2009, MSF helped immunize more than 1.5 million children and adolescents in response to measles outbreaks in 10 countries. In 2010, this figure will probably double. 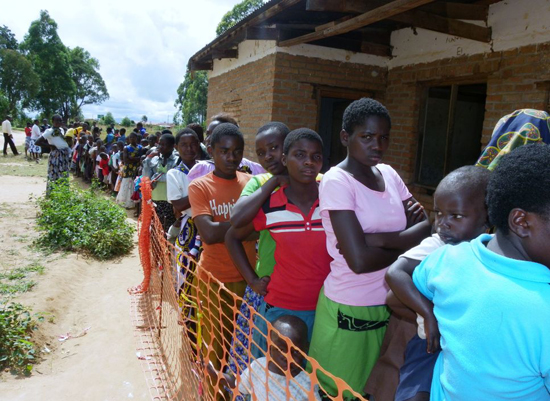 People awaiting measles vaccinations at an MSF program in Malawi

Over the past two years, several teams from Doctors Without Borders/Médecins Sans Frontières (MSF) have responded to increasingly frequent and widespread measles outbreaks in African nations. Even though the World Health Organization (WHO) has targeted measles for eradication by 2015, the disease has seen a marked rise since 2009, following 20 years of steep decline.

The resurgence of measles outbreaks, primarily in Africa, poses a major problem. After years of progress resulting from the Expanded Program on Immunization (EPI) approach and a real global decline in the number of measles cases and deaths, how can these outbreaks, in this many countries, be explained? We must now urgently confront the failures of the measles prevention system as well as the impediments to an effective outbreak response.

In cooperation with various Ministries of Health, MSF has responded to multiple measles epidemics over the past year. In the field, the actions of MSF teams generally fall into three areas: surveillance, patient care, and emergency immunization. In 2009, MSF, in collaboration with Ministries of Health and other stakeholders, immunized more than 1.5 million children and adolescents in response to measles outbreaks in 10 countries. In 2010, this figure will probably double.

It is hardly surprising that these measles epidemics should occur in conflict zones or in countries whose health systems are in complete disarray. However, it is striking to note that over the past two years, a number of interventions–some on a very large scale–were conducted in stable countries such as Malawi and Burkina Faso. In the face of these realities, it is imperative to question the shortcomings of existing prevention programs.

The strategy adopted to decrease the number of measles-related cases and mortality is appropriate, but its efficacy is limited by several factors, including the rigidity of the EPI approach, the lack of funding, and the widespread demobilization of resources in the presence of a seemingly vanquished disease.

MSF teams and other actors can limit the spread of these outbreaks, and thereby the number of cases and deaths, by staging a rapid intervention. However, these teams often encounter obstacles that hinder them and limit the impact of their intervention. Because WHO recommendations have not been integrated into national programs or by their partners, technical discussions in the field about outbreak response strategy, target age groups, and target geographic areas result in additional, sometimes significant delays in the initiation of immunization campaigns. Funding shortages have the same result.

MSF is sounding the alarm about the system’s present dysfunction and the need, in collaboration with all the stakeholders (WHO, UNICEF, Global Alliance for Vaccination and Immunization, donors, Ministries of Health, etc.), to design a more effective response as part of the fight against measles.