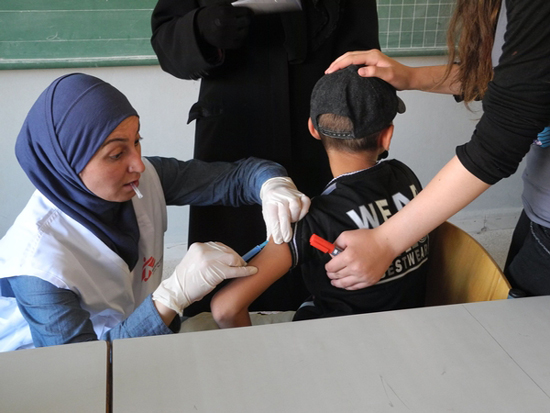 An MSF nurse gives a vaccine to a young Syrian boy in northern Lebanon.

As the crisis in Syria continues to intensify, the humanitarian needs—both in Syria and in surrounding countries—are increasing significantly. Many people have been killed and wounded and tens of thousands have fled their homes, leaving behind everything they own. Medical and humanitarian assistance within Syria is extremely limited, and aid from international organizations, including Doctors Without Borders/Médecins Sans Frontières (MSF), has been severely restricted. In neighboring countries such as Lebanon, Jordan, and Iraq, MSF has therefore augmented its work with the growing numbers of Syrian refugees flowing across the borders.

"In Lebanon, the Syrian refugees we are assisting are not in a position financially to afford medical treatment,” says Fabio Forgione, MSF’s head of mission in Lebanon. “Although aid was quickly deployed at the start of the crisis, and many organizations are still present, it needs to be maintained. Free access to health care and humanitarian assistance must be reinforced for Syrian refugees."

On July 20 and July 21, there was a new surge as thousands of Syrians entered Lebanon. MSF teams were dispatched to the areas along the border and to the Bekaa valley, where many refugees are seeking sanctuary.

This past June, MSF carried out a survey of the living conditions and health care needs of Syrian refugees. Some 889 families were interviewed in Tripoli and Wadi Khaled, in northern Lebanon, and in the Bekaa valley, in eastern Lebanon. Most were from Syria’s Homs governorate and fled Syria because of insecurity and a lack of access to medical care.

The results indicated that many are living in overcrowded conditions, fearful for their safety, traumatized but unable to afford medical care. Nearly half of those interviewed had lost at least one family member in the past six months to the violence in Homs. Most arrived in Lebanon with very little, having left behind their extended families, houses, assets, and businesses.

The vast majority of refugees have experienced traumatic events, and many are suffering psychological distress. MSF psychologists and psychiatrists carried out almost 800 consultations from April to June. Some patients described being tortured in Syria. Due to current internal political instability and the security situation, a significant number of refugees do not consider Lebanon to be a safe place of refuge.

Meanwhile, the 5,800 general health care consultations conducted in MSF clinics from April to June highlight the fact that many Syrian refugees are unable to get treatment for chronic diseases such as diabetes, asthma, hypertension and cardiovascular diseases, either because it is too expensive, or because it is not available. Twenty-five percent of patients were suffering from a chronic disease requiring treatment, yet nearly one in five patients were not receiving the treatment they need, and four out of ten said they were unable to access a hospital in Lebanon, either due to prohibitive costs or due to insecurity.

MSF reiterates its call for authorization to work in Syria. The organization stands ready to mobilize its medical and surgical teams and is determined to operate independently, providing care to anyone requiring it. In the meantime, MSF continues to support networks of Syrian doctors and field hospitals in Homs, Derah, Hama, Damascus, and Idlib, delivering supplies and medicines from neighboring countries on behalf of patients who urgently need medical assistance.

In Jordan, Lebanon and Iraq, all of which share borders with Syria, MSF has been providing medical care mainly to Palestinian, Syrian, and Iraqi refugees. MSF teams in these countries are prepared to deal with needs arising from the conflict in Syria. In Lebanon, MSF has pre-positioned emergency medical stocks and relief items for 10,000 people in case a possible decline of the situation in Syria triggers a massive influx of refugees.