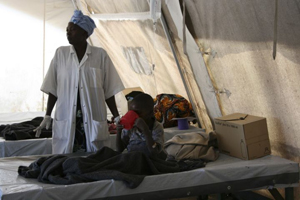 MSF teams also provide medical care to victims of violent trauma and sexual violence, and treat children for malnutrition. In some areas MSF has opened new health clinics to provide care for the increasing number of people fleeing the violence. Mobile teams are doing assessments and providing medical assistance in new areas of North and South Kivu.

MSF teams are also monitoring the situation in IDP camps to prevent outbreaks of disease. This year MSF teams have responded to cholera outbreaks and have carried out measles vaccination campaigns. MSF has been continuously present in North Kivu since 1992.

From January to October 2008, MSF teams:

MSF has been working in the Democratic Republic of Congo since 1981, and in North Kivu since 1992. As of November 2008, MSF had 87 international staff and 1126 local staff working in North Kivu and South Kivu provinces. 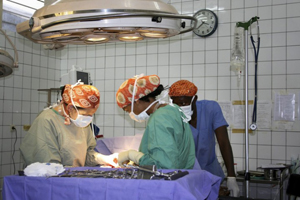 MSF has been working in the Rutshuru reference hospital since August 2005 providing secondary health care, including surgical, pediatric, gynecological-obstetrical care, emergency care, and specialized care to victims of sexual violence. The hospital’s capacity has been increased to 220 beds.

An ambulance referral system has been set up in collaboration with health centers in the area. When a patient needs to be treated in the hospital, the team sends an ambulance to transfer him  or her to Rutshuru. The number of surgical interventions per day during the first 9 months of 2008 has increased in comparison with previous years to an average of 12 per day (from 3 per day in 2006).

A cholera treatment center was set up in Rutshuru and in Rubare. In addition, children are treated in Rutshuru hospital for malnutrition.

In Nyanzale, MSF has been running a small 60-bed hospital and a nutritional center since 2006. The organization is providing specialized care to victims of sexual violence in Nyanzale and other places in the surrounding area. Patients needing hospitalization are referred by ambulance to Rutshuru hospital. Mobile teams are providing health care in the villages and IDP camps around Nyanzale: in Kasoko, Bambu, and Katsiro.

In September, MSF’s international staff was evacuated for three weeks due to the increasing violence in the area. The team returned in early October and left again at the end of the month, while the local staff remained. The team returned again on November 18.

In Kabizo, MSF started working at the end of April, performing measles vaccinations (19,902 people vaccinated) and providing medical care here and in surrounding villages. Patients are admitted to a small 16-bed hospital. Those requiring surgery are transferred to Rutshuru hospital.

The MSF team provides medical care to victims of sexual violence and to malnourished children. Mobile teams provide medical care in IDP camps in Kabizo, Tongo and Rusekera. At the end of September, the team left for Kayna, due to the fighting and the northward movement of displaced populations. Since 17 November, they are making day trips to the area from Rutshuru. 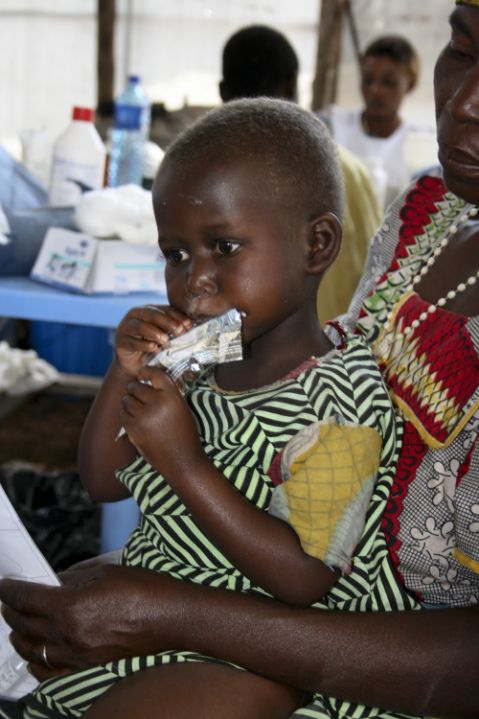 MSF has treated more than 3200 children for malnutrition in North Kivu.

In Kayna and Kanyabayonga, MSF has been providing medical care to people fleeing the fighting since 20 September. Patients are admitted to Kayna general hospital where MSF provides surgical care. MSF has also started to treat cholera patients and malnourished children, but the team was forced to leave on November 11 due to the insecurity. Mobile teams were also providing medical care in three areas in Kanyabayonga and referring patients to Kayna hospital.

Since August of last year, MSF has been supporting the hospital in Masisi town. The capacity of the hospital has been increased from 70 to 160 beds. MSF medical teams provide secondary health care in the hospital, including lifesaving surgery, and support a health center in town, where they provide consultations. MSF has also set up a 25-bed facility that welcomes pregnant women before delivery.

Patients are also treated for cholera in Masisi and Nyabindo. Victims of sexual violence receive medical and psychological care, and children suffering from malnutrition are treated as well. To respond to the needs of the displaced population in the area, MSF has set up four mobile clinics, with a referral system.

MSF started working in Kirotshe hospital on November 10, admitting patients and performing surgery. Consultations are performed in Kirotshe and outreach consultations in the surrounding villages of Mushake, Karuba and Rubaya.

On November 19, the team started providing group and individual psychological support to people in the Shasha IDP camps.

MSF has supported the St. Benoit hospital in Kitchanga since 2007, and the hospital in Mweso since April 2008. Teams perform surgery in both hospitals.

MSF also supports a network of health centers and, since January of this year, has significantly expanded its program to provide assistance to people affected by the conflict in Masisi district.

MSF has supported health centers in Kirolirwe, Bukama, Kachuga and Kalembe since 2007. Since January 2008, MSF now also supports the health centers in Pinga and Mpeti and, since April, in Kanyatsi. Mobile clinics go weekly to Malemo and Busihe. In all these places, MSF also treats malnourished children. The organization treats cholera patients in Kitchanga, Mweso, and Buhimba. 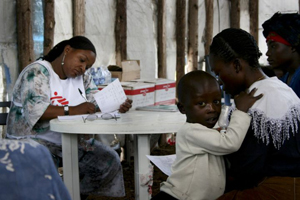 To respond to the needs of the displaced population, MSF has set up mobile clinics.

Tens of thousands of people are living in camps outside Goma, the provincial capital, with several thousand more finding accommodation with host families. MSF is working with the Ministry of Health to treat cholera patients and prevent further spread of the disease.

Cholera is endemic in DRC and MSF teams treat many cases in North Kivu every year. After IDP camps appeared in Kibati, just north of Goma, MSF started treating cholera cases there on November 11, and also in Goma general hospital. In Goma, cholera patients are also treated at the Don Bosco cholera treatment center. Mobile teams provide consultations in IDP camps in Kibati.

Between 15,000 and 20,000 displaced people have gathered in the Minova area, west of Goma, on the border with North Kivu province. When fighting resumed in the region in September 2008, MSF launched an emergency intervention in the Minova area to respond to a serious increase in cholera cases and fresh population displacements.

The team distributed relief items to 500 households living in very precarious conditions, and set up a cholera treatment centre in Minova. At the peak of the crisis, in mid-October, an average of 70 cholera cases were being registered each week. The number of new cases has since decreased. MSF is also supporting four area health centers.

In September 2008, MSF started a new project in the region of Kalonge, an area surrounded by forests and occupied by armed groups. The region is seriously neglected; people there are suffering from malnutrition and sexual violence, and they lack access to healthcare. MSF works in the reference hospital and four health centers. Since the project started in September, the team has been performing an average of 1000 consultations per month in the hospital.