Malnutrition in children under five is growing

Two weeks ago, MSF launched a nutritional intervention in some areas of the southern region of Oromiya in Ethiopia, following assessments that showed alarming levels of malnutrition among children under five. 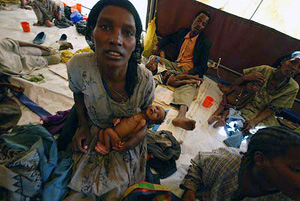 Parents wait with their children at an MSF therapeutic feeding center in Oromiya region, where, due to alarming rates of malnutrition, MSF has launched an emergency nutritional intervention.

Two weeks ago, the medical humanitarian organization Doctors Without Borders/Médecins Sans Frontières (MSF) launched a nutritional intervention in some areas of the southern region of Oromiya in Ethiopia, following assessments that showed alarming levels of malnutrition among children under five.

MSF has set up three inpatient clinics—also called stabilization centers—for the most severely malnourished children who also have medical complications, such as pneumonia or enemia, and need intensive medical care. The centers are located in the towns of Ropi, Senbete Shinquille, and Shashemene in the Siraro and Shashemene districts. As of May 27, MSF was treating around 435 children in these 3 centers.

In Ropi, MSF is caring for 150 children who were previously being looked after by another nongovernmental organization, and an additional 25 children. Many of them are suffering from kwashiorkor—a form of edema caused by malnutrition, which manifests in liquid retention in the legs and feet. Kwashiorkor is a serious condition that can lead to death by heart failure. 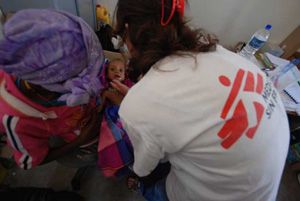 An MSF worker examines a baby for malnutrition at a therapeutic feeding center in Oromiya.

In Shashemene, MSF set up another stabilization center in an already existing structure beside the town’s hospital where children were being admitted at a growing rate. MSF is caring for 135 patients from the hospital and more patients are arriving every day. On May 26 alone, 70 new cases were admitted; and, as of May 27, there were about 200 children receiving care there . MSF has also opened a new stabilization center in Senbete Shinquille. Around 60 patients were admitted on the first day of activities.

In order to treat children suffering from malnutrition who are not suffering from complications, MSF is also supporting several outpatient therapeutic programs (OTPs) in existing health centers in Fajigole, Aje, Toga, Ropi, and Senbete Shinquille. MSF medical teams are currently visiting those structures and other ambulatory centers in order to screen children for malnutrition. Complicated cases are referred to the stabilization centers, while those without complications are treated in an ambulatory way with specific therapeutic food. At present, MSF is treating 125 children at the OTP in Ropi and 150 children at the OTP in Senbete Shinquille. Medical teams have also started doing outreach activities in the surrounding areas, and MSF expects to receive more children in the coming days.

These activities are in addition to MSF’s regular projects with a nutritional component in the Somali region of Ethiopia: in Degahbur, Cherrati, Warder, and Fiq. Some of these programs have seen a significant increase in the numbers of malnourished children over the last month. In Degahbur, for example, MSF is now treating 600 children for malnutrition, 20 percent of whom are severely malnourished.

Given the fact that the next harvest is only expected to occur in August or September, MSF remains prepared to respond on a larger scale if necessary, and will continue nutritional surveillance in the area.