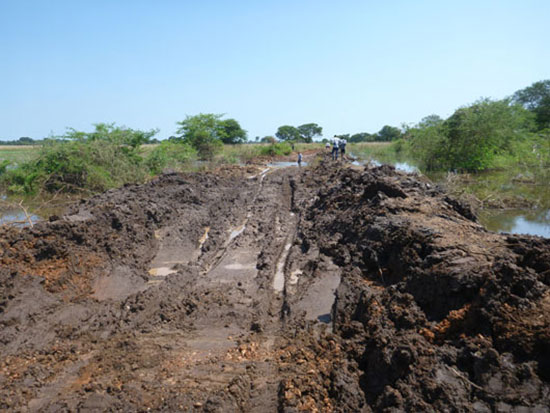 The muddy road near the clinic in Adura. 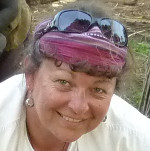 Kate Chapman is an Australian nurse with an emergency/trauma background. Here, she blogs from Ethiopia, her second mission with Doctors without Borders/Médecins Sans Frontières (MSF). Read Kate's MSF Blog here.

On Wednesday, the river had risen so much that the area where we land the boat in town had broken its banks and flooded half the town. This left our only landing point around 800 meters from the road on the main dock, wedged between the many huge open-top steel cargo boats being loaded with contraband destined for South Sudan.

The clinic in Adura had been busy with over 150 patients. On the way back we had one patient for transfer in the car, an old lady with TB. We came across some men carrying a very unwell-looking man. We stopped, found him to be critical, packed him in the car, and made our way back to Mattar.

I called ahead to our base and asked them to send the boat with a stretcher and to meet us on the road. Of course no one was there when we arrived, so leaving the patients by the car we carried the heavy boxes of drugs and equipment to town, meandering through the heavily bogged path leading to the river. This is very difficult as just walking without carrying anything is a challenge in itself in the treacherously slippery Mattar mud. I am twice as good at not falling over compared to how I was at the beginning of the mission, but compared to the sure-footed team I’m still a joke!

Our boat was wedged between two huge cargo boats and the river was chock-a-block full of lilies slowly creeping from upstream Adura, headed for the big Baro River where the current will take them to Sudan. We literally had to pull our boat along by hand using the cargos to get out. I sent the team back with the gear asking them to drop it off then come back with a stretcher for the patients. I went back to the patients and waited. Half an hour went by before the logistician turned up with the stretcher, but he said the motor was playing up on the boat and he couldn’t get in near town so he was going back alone and the other boat would pick us up. I, together with some locals and caretakers, brought the patients down from the road to town under the shade of a tree. Another hour went by with no one turning up so I called base again and was told they had left ages ago.

The town riverfront was boxed in by cargo boats being loaded. The river was so full of lily plants that it looked like an iridescent green field you could walk across. After pacing up and down the bank for some time I spotted our boat. It was slowly making its way through the jungle of plants. There was nowhere to dock and after trying in vain with an army guy to push the cargos to make enough room, our driver finally pulled up at the end of the dock behind the cargos.

We carried the patient on the stretcher, the old lady and her belongings, and some other bits through the bustling hive of dockside activity, climbed into one laden cargo boat, walked across the supplies packed beneath the tarpaulin, climbed into a second cargo boat, and walked the length of it atop their cargo to the end where the owners and packers helped us lift and pass both the stretcher and the old woman and supplies to our boat. I then found out why it took so long to come back and get us. The river was literally choked with lilies and clumps of grass as far as the eye could see. We had to break our way through, separating the lilies with a stick. It took around half an hour to travel the one kilometer back to the compound. This river is a truly amazing endless source of change.

After getting back and taking the patients to the health center I did my computer work, unpacked the metal boxes, and repacked the plastic ones in preparation of Jikow on Thursday. I then went to bed as a sore throat, runny nose, and earache had been plaguing me since Monday. About half an hour later, our program coordinator called me with some bad news! Our second boat with the 40 horsepower motor was stuffed! Kaput! Finito! Totally knackered! So that meant no Jikow, no Nasir, no boat travel other than from base to town.

I wasn’t too upset about not spending six to eight hours in the boat while I was feeling like s**t, but more importantly the nutrition kids would be without their therapeutic food and the leprosy, tuberculosis, and HIV patients would be without their medication, which means they will need reassessment and blood levels taken in Gambella before restarting treatment. This is a nightmare, as anything to do with movements takes weeks of frustration to organize, especially for non-urgent patients, so many—like our previous leprosy man—will relapse before recommencing treatment.

The atmosphere at home has changed with the reduction of people and now it’s a bit more relaxed. The bugs are horrific and have plagued our everything for the last few weeks. If you pour a coffee you will get earwigs from both the kettle and the sugar. Small lice-like bugs the size of a thumb nail have invaded with force and are constantly crawling, biting, and getting into places better left undescribed! Whenever you walk through a doorway the small tick-like bugs fly straight into your face, up your nose, and any other orifice they can enter. The trick is to close your eyes and exhale as you enter or leave. The stink bugs, small, black, crispy, biting bugs that stink like rotten meat are constantly in our hair (lucky Matthieu) or crawling on us. When you brush them off or touch them they dispel their odor tenfold. Not to mention they taste just like they smell! Last night when I was cooking dinner, they were so thick in the kitchen that Petra stood behind me flapping a towel, trying to create enough air to keep them out of the pan!

With the bugs also come the swallows. A fantastic frenzy of flying acrobats that swoop and soar in spasmodic, unpredictable waves of excitement. I think they are chasing bugs, but I honestly can’t see. Anyway it’s a spectacle to see.

With the rising river, the huge Schelle (Nile perch) 20–100 kilos in weight have arrived, not to mention the 20–30 kilo tiger fish with teeth so sharp and long they could take a finger off in a single snap, probably an arm with one bite and a quick shake!

Yesterday afternoon I sat in the boat by our dock having a little R&R, smoking, soothing my burning throat with a cold coke and dangling a line just by the side of our cargo boat. I got a bite straight away, lost my line with the weight of it, caught a small one (twp foot) then lost my line again. I can wind them in to the edge of the boat but one shake of the head snaps my light 15 pound line so I actually get to see what I’m losing! Anyway, I caught a few small ones but without a heavy line and steel trace I won’t be landing any of these monsters! Imagine catching a fish as big as me!!! I think I’ll try and make a gaff of some description today! Anyway, our freezer is full of some of the nicest fish I’ve ever eaten. Gone are the days of pasta and tomato sauce! Its fried fish, baked fish, fish soup, fish stew, and with my new soup supply, fish mornay!